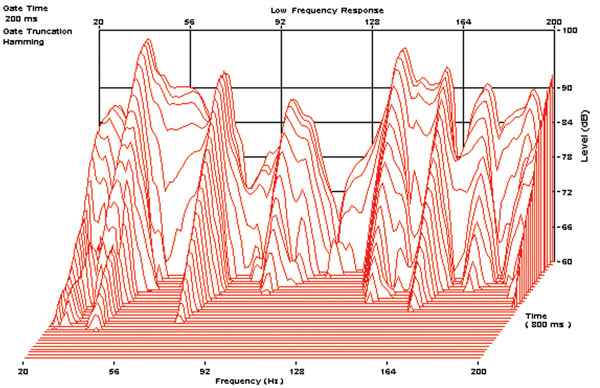 As stated in my earlier article (How do listening room acoustics affect sound quality?), room modes cause standing waves that can cause three acoustical problems: a level boost at some frequencies, an extent of the duration of sound at those same frequencies (resonance) and some profound dips at other frequencies.

These acoustical phenomena can produce resonant bass sound that has holes in it and suffers a lack of tightness.  The subwoofer’s frequency response will be greatly affected, and it should be noted that standing wave problems can extend up to about 300 Hz.

Figure 1 shows a low frequency measurement in a typical listening room.  On the amplitude scale (the Y axis, labelled “level”), we can see a very irregular response.  The time scale (the Z axis, labelled “time”) is also very important.  We can see that the resonances last a certain time.  Some call this ringing.  (Other rooms could easily exhibit longer ringing time.) 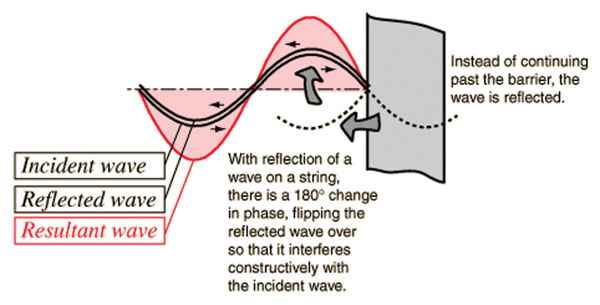 Fig. 2 The reflected wave adds to the incident one.

The standing wave
Have you ever sung in a bathroom?  Some notes seem to make the whole room resonate.  In fact, this is exactly what happens.  The note that you are singing is probably one of the room’s standing waves.  A standing wave is a low frequency resonance that takes place between two opposite walls as the reflected wave interferes constructively with the incident wave.  The resonant frequency depends on the distance between the two walls.
There will be many room modes between two walls as the phenomenon will repeat itself at multiples of the first frequency:  2f, 3f, etc.

This explains why the low frequency response changes as we change the listening spot in a room.  It also explains why we have so much bass close to a wall.
Since there are three dimensions in a room, there will be three series of room modes. 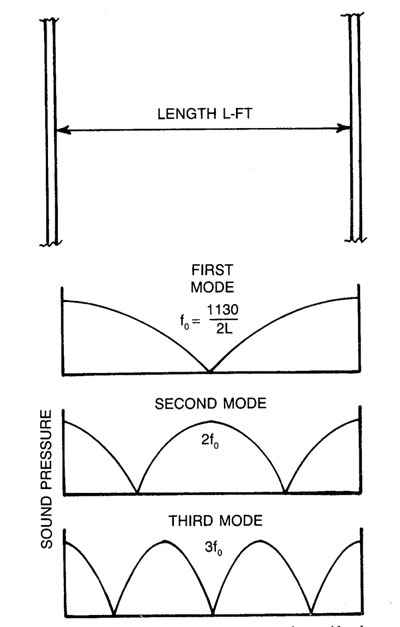 How to solve the problem?
The phenomenon is unavoidable; there are standing waves even in the best rooms.  How to minimize the problem?  One way is to distribute those frequencies in the spectrum so that they won’t be too close to each other; otherwise they can add up, if they are at high amplitude at the same place in the room, namely the listening spot.  What’s more, they must not be too far away from each other because there can be an audible ” hole ” created in the frequency response.  This is a rule applied even if we know that there will be holes in the frequency response, since all room modes are not heard at a single spot.
Influential factors to get a good distribution of those resonant frequencies are the volume of the room and its dimension ratio.  Gilford1  states that the axial modes spacing should not be less than 5 Hz and not more than 20 Hz.
In smaller rooms, the Davis2  frequency marks the superior limit from which modal density becomes high enough so there won’t be any colouration due to standing waves;
This rule is highly approximate.  In an average size listening room, this frequency is around 350 to 450 Hz.  The larger the smallest dimension, the lower this frequency is and, usually, the fewer problems we have.

Room analysis
Axial modes are issued from reflections on two surfaces.  There are also tangential and oblique modes, which will be discussed later.  Axial mode analysis makes it possible to identify the problems and to optimise the dimensions of the room in order to get a better axial modes distribution.  Here is a tool to do such an analysis:
www.hometheatershack.com/roomcalculator.xls
This calculator is used in the upcoming part of the article.

Large room or small room?
Here are two rooms of different volumes with the same ratio of dimensions.
Using the calculator, when we enter the dimensions of the smaller room, we can see that there are several gaps of more than 20 Hz between modes.  (see figure 4)
These “holes” can bring some colouration in the low frequency response.  This is because smaller dimensions give higher frequencies, thus larger gaps between them.  The situation is typical of small rooms and cannot be avoided.  The same exercise done with the dimensions of the larger room shows less of such problems.  (see figure 5 on the next page)

In general, the minimum volume I recommend for a listening room is around 1500 to 2000 cu ft.

Changing one or two dimensions can solve the situation.  To do this, we must determine which frequency belongs to which dimension.  A table like the one in the calculator is necessary.
In table 4, one can note that the problematic frequencies of 96 Hz, 144 Hz and 192 Hz are all related to the width.  Those three frequencies should be a little bit higher to widen the gap between their precedents.  If the width is slightly diminished (enter 11.33′ instead of 11.75′), the three problems have disappeared (see figure 7).

Were those three frequencies a real problem?
First, let’s say that the listening spot in this room is exactly in the middle.  For the first conflict, 94 Hz is of the third order (odd multiple) (see table 4) and 96 Hz is of the second order (even multiple).  So being of “opposite” amplitudes, they will not add up.  The same for 141 and 144 Hz.  On the contrary, 188 and 192 Hz could add together since they both are even multiples, that is at maximum pressure level at the center of the room.

Michel Leduc is an acoustics professor (Cégep of Drummondville), researcher (Musilab, CCTT sound technologies) and acoustical consultant (Sonart Acoustique, www.sonartacoustique.com).  He can be contacted by email at
info@sonartacoustique.com.