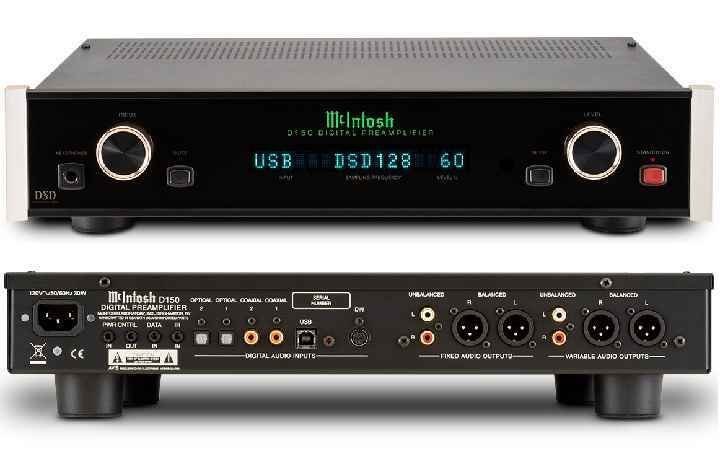 McIntosh has just announced their new D150 digital stereo preamplifier. The new McIntosh D150 brings DSD and DXD format capabilities via a USB input that accepts up to 32-bit/384kHz signals, as well as DSD64, DSD128, DXD 352.8kHz and DXD 384kHz.  There are also two coaxial and two optical digital inputs that accept up to 24-bit/192kHz signals.

The D150 sports both balanced and unbalanced connections in variable and fixed volume outputs.  the D150 has been designed to also be used as a headphone amplifier.

The D150 uses the same revered DAC as the D100, featuring an 8 channel, 32-bit, 500kHz D/A converter with wide dynamic range and extremely low distortion. Eight channel D/A converter is used in stereo Quad Balanced mode. Music at all levels is reproduced with extreme precision and elegance. A 1/8” mini jack is provided for control data from the data output jack of a McIntosh preamp or A/V Control Center​. It shares the classic façade, knobs and handcrafted black-glass front panels as all other McIntosh components in a small form factor of just under 4″ in height.​

Price and availability are yet to be announced.  Look for more information to be shared at: http://www.mcintoshlabs.com.