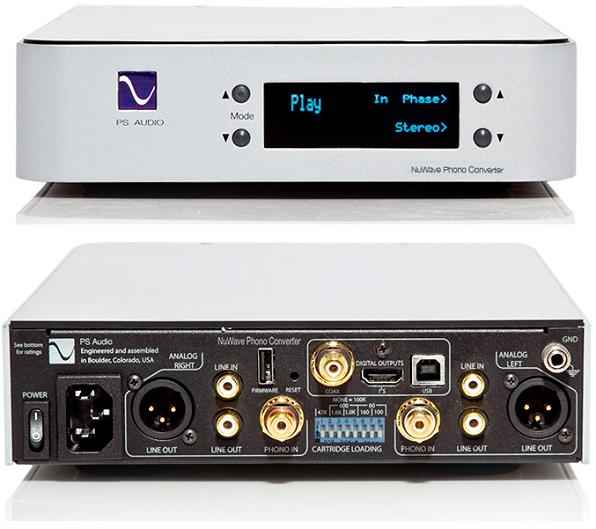 PS Audio has just introduced an all-new product – the PS Audio NuWave Phono Converter (NPC).  The NPC combines an analog RIAA phono preamplifier with a high resolution analog-to-digital converter (ADC).  The NPC can produce both a balanced analog audio output as well as a digital PCM or DSD output.

The new NPC design centre around running parallel and separate analog and digital paths.  This allows each to be optimized for performance – and ultimate transparency.  Vinyl mastering is handled through filters and reverse RIAA EQ in the analog domain from the input to the output – 100% analog through its phono chain.  Once the playback and EQ requirements of the vinyl path have been properly amplified, a state-of-the-art ADC can convert the pure analog signal to a digital data stream.

With appropriate software and a computer, NPC owners can RIP their entire vinyl collections to their computers at 192/24 PCM or up to double DSD rate.  Reclocked 192/24 as well as 64X and 128X DSD can be sent over S/PDIF through either the USB or coaxial output and direct DSD and PCM streams are available through the I2S output. Use of the DoP protocols are standard on the NPC.

Technical Details:
– THAT 1583 phono preamplifier input differential analog gain stage with 60dB of programmable gain and noise specified at 1.9nV/?Hz, with bandwidth to 1.7mHz.
– Passive RIAA EQ stage.
– New class A all FET discrete gain block featuring a combination of JFET and MOSFET devices in a low open loop design.
– Burr Brown PCM4222 ADC with noise and distortion characteristics that exceed 120dB in both linear PCM or DSD formats.
– PCM output at 24 bit 192kHz; DSD at 64X or double DSD at 128X oversampled rates.
– PCM data through the PCM4222 is passed through a PS Audio Digital Lens reclocking solution removing added jitter from the datastream.
– PCM & DSD can be sent over S/PDIF, I2S, or USB with DoP (DSD Over PCM) protocols.

Users can record either DSD or PCM through either Mac or Windows machines using an off-the-shelf program such as Audacity. Recorded files can be played directly on a computer using software such as Foobar for Windows OS and Pure Music for the Mac. Users can also stream these files directly to a DAC via USB from the computer or Ethernet with an appropriate server.

The PS Audio NuWave Phono Converter will begin shipping this September at a MSRP of $1,895 U.S.  Look for more details at: www.psaudio.com.