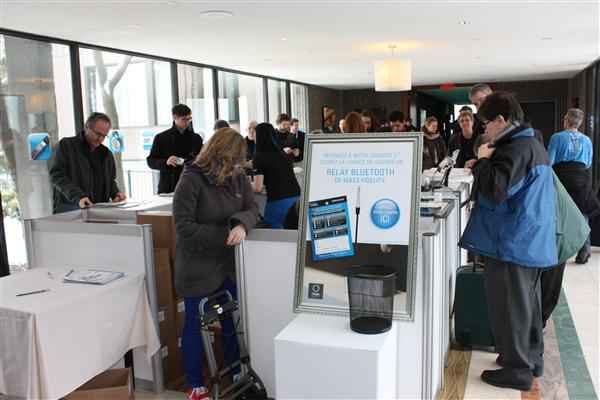 Welcome to Part 2 of our Salon Son & Image 2013 coverage, written by George de Sa.  If you missed Part 1 of this feature – please click HERE TO READ IT FIRST.  Saturday, March 23rd started with a much larger crowd at the front reception, where the SSI Blue Girls did a wonderful job of ushering patrons in. 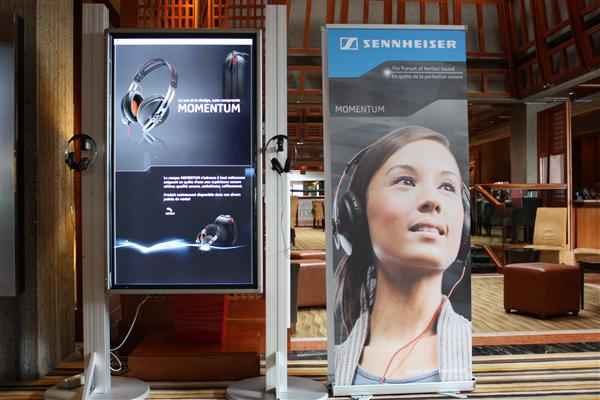 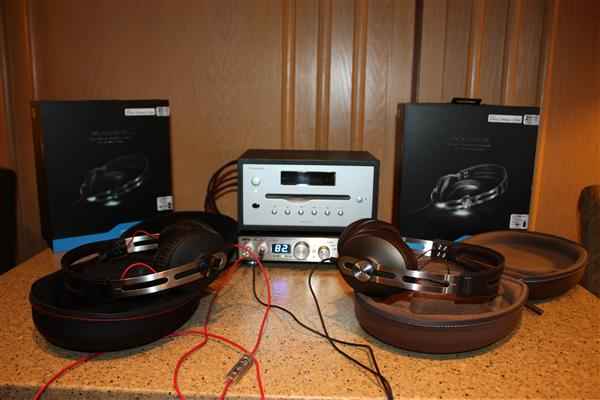 Sennheiser’s presence was hard to miss at this year’s show, thanks to their eye-catching display just inside reception area that highlighted their new Momentum headphones, using both an interactive video panel and poster.  Within the Sennheiser room I found a neat display of working products allowing easy inspection and auditioning.  Sennheiser was also thoughtfully offering show discounts on most of its displayed products – a tempting opportunity for show-goers.  The new Momentum headphone was featured in a working display in both its available colours – black with red accents and saddle brown, priced at $399.  I found the styling and price much to my liking.  Another couple of new products featured in the room were the Sennheiser HDVA 600 headphone amplifier ($1,599) and the HDVD 800 headphone amplifier/preamplifier/DAC ($2,300).  The HDVD 800 incorporates a 24 bit / 192kHz capable DAC with coaxial, optical, asynchronous USB and balanced connections.  It was setup for listening with Sennheiser’s own sophisticated HD800 headphones ($1,599).  Fit and finish on these new products was very impressive.  Other products featured in the room were the HD 558 open-ear headphone ($349) lashed to a Vivoli i-dock / CDP and the HD 598 ($379) working with a Grace m902 DAC/headamp.  Another new product that was on display was the Sennheiser RS220 ($799) which I was told has been voiced to sound much akin to the HD 650.  The RS 220 is a digital wireless model with an integrated DAC that allows connection via S/PDIF coax or optical. 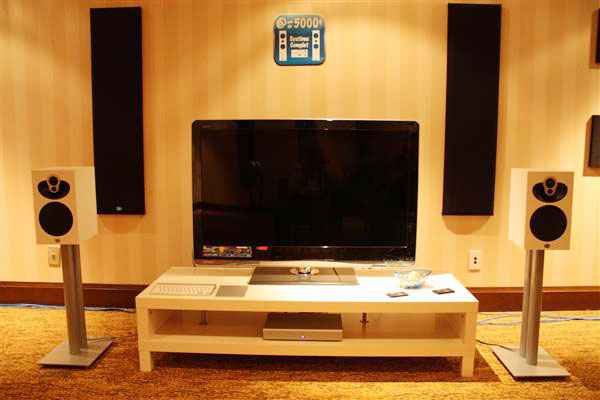 Zidel Marketing, a promotional company for audio product distributors and resellers, had a very attractive room with products from Linn, Tannoy and Primacoustic on display.  The eye… or should I say ear catcher in the room was the Tannoy/Linn system featuring the just released Tannoy Definition DC10A tower speakers ($17,000/pair), which distinguish themselves by their absolutely lovely lines and finish and their Alnico Magnet system that utilizes a dual concentric driver to ensure perfect time alignment.  Powering the Tannoy’s was Linn’s Akurate DSM Network Music Player and preamplifier ($9,350) feeding an Akurate 4200 4-channel digital power amplifier ($8,360) delivering 400 watts/side to the connected Tannoy’s via a bi-amplfied hook-up.  The sound was energetic and rhythmic.  To the side of the room was an all-Linn system comprised of Line 109 3-way bookshelf speakers ($1,750/pair) running on a prototype of the newly announced Sneaky DSM remote controlled network music player / integrated amplifier ($3,025) running in bi-amped mode.   There was also a third system – the Linn Kiko system featuring the Kiko DSM integrated amplifier / music streamer with Kiko bookshelf speakers ($4,390 for the package). 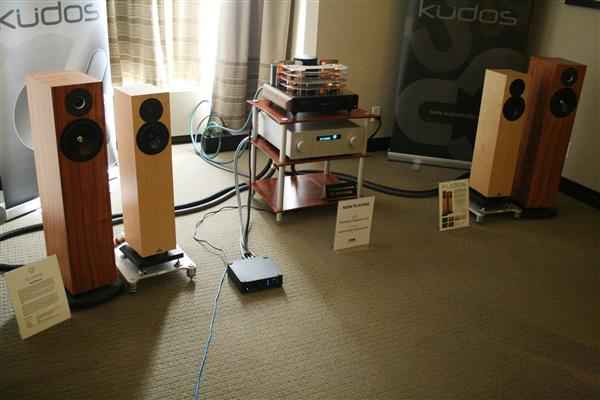 Crown Mountain Imports (CMI) is a Canadian distributor that’s still a relatively young company and we have a feeling that you’ll be hearing a little more about its brands this year.  Its portfolio of audio brands includes Kudos Audio, Mimetism, Mastersound, Rothwell and Track Audio.  CMI was showcasing two different music systems to visitors.  One consisted of the Mimetism 15.2 integrated amp ($8,000) and the Kudos Audio X2 floorstanding speakers ($2,900). The other system contained a Mastersound Compact 845 integrated amp ($7,350) and debuted a brand new Kudos Audio Super 20 floorstanding speaker ($8,500) which featured a beautiful cabinet finish.  I sat down and listened to the system with the Kudos Audio X2 speaker and it produced a very fluid and engaging sound, offering a well balanced, musical presentation given its attractive price point.  Expect to see a review of this speaker to appear in an upcoming issue of CANADA HiFi. 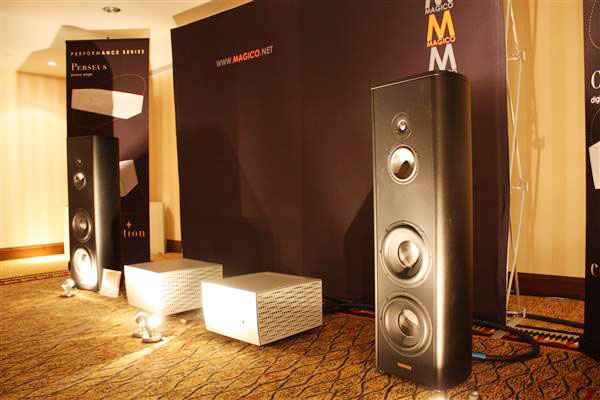 I’ve read much about Magico over the last couple years but never had the opportunity to see or hear them in person, until SSI.  Magico was paired in a room with Constellation Audio.  The room was warmly lit to show off the relatively new Magico S5 3-way, 4 driver, 190lb loudspeaker ($29,400/pair), that was featured in its standard satin black finish.  All six optional paint finishes ($32,500) that can be chosen to adorn the robust S5 extruded aluminum skin, were on display.  Powering the S5 speakers were a pair of Constellation Audio’s Performance Series Centaur Mono amplifiers that weighed in at 275lbs each and capable of providing up to 800 watts/channel into the 4 ohm S5’s that were gracefully in play.  The front-end was Constellation Audio’s Cygnus music server ($29,000) with a 32-bit / 192kHz DAC into a Virgo II linestage ($27,000), “II” representing its dual chassis.  Cabling was all JPS Aluminata with Magjco’s own QPod vibration eliminators appropriately used.  The system sounded full, extended and effortlessly smooth.  I came in at just the right time to appreciate Jennifer Warnes singing The Famous Blue Raincoat – how it made me want to stay longer, but there was still so much more to see. 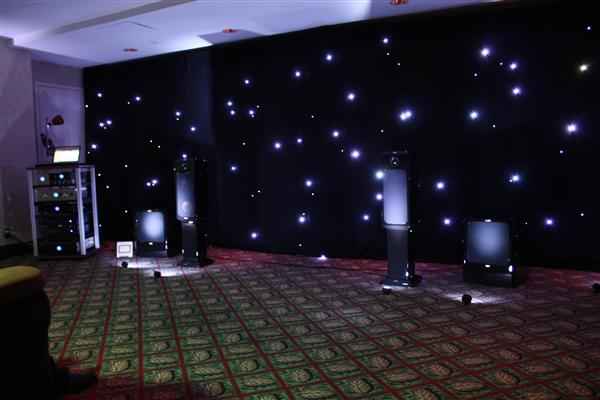 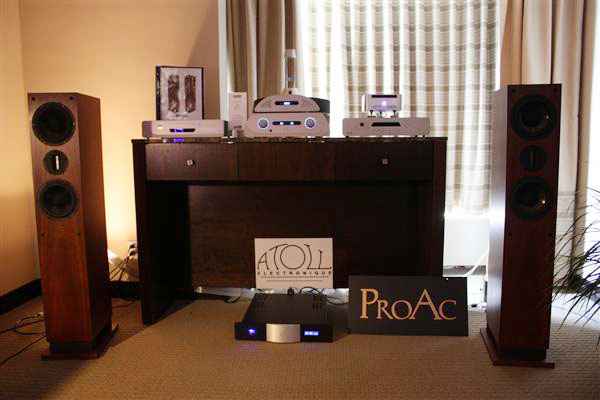 A string of three rooms hosted by Atoll Electronique Canada and Audio d’Occasion contained products from Atoll, Elac, Rega, ProAc and a new-comer CeolBox.  The first room featured an Atoll system with their new ST200 streamer/pre-amp/DAC/internet radio ($2,799) strapped to the PR400 pre-amp ($5,599) and AM400 power amp ($5,599), running Elac FS 509 loudspeakers ($24,000/pair) with a CeolBox fanless 2TB NAS/CD-ripper/player ($1,500) supplying the music files.  Clear and crisp would be the adjectives I’d use for the sound I heard.  The next room was an all-out Rega assault.  The highlight was the Canadian debut of the Rega RP8 turntable ($3,000 a la mode or $4,100 with an Apheta MC cartridge) – sadly, it was on static display but if its sexy lines are suggestive of its sound – well, she is welcome to dance for me anytime.  The working system in the room included an Apollo-R CDP ($1,095) with Rega DAC ($1,095) or RP3 turntable ($1,095) into a Brio-R integrated ($895), running through RS7 speakers ($3,495).  The sound was full of PRAT and very natural and welcoming, just as I’ve come to expect from Rega. The third room contained Atoll equipment: an IM400 integrated ($5,999) fed by a CD400 CDP/DAC ($6,799) or ST100 streamer/preamp/DAC/internet radio ($2,399) with source files from another CeolBox Linux based NAS media player/controller ($1,500).  Making things very interesting were the speakers hooked up to this rig – the ProAc D40R ($12,995), which served up a very pleasing, if not intoxicating soundfield. 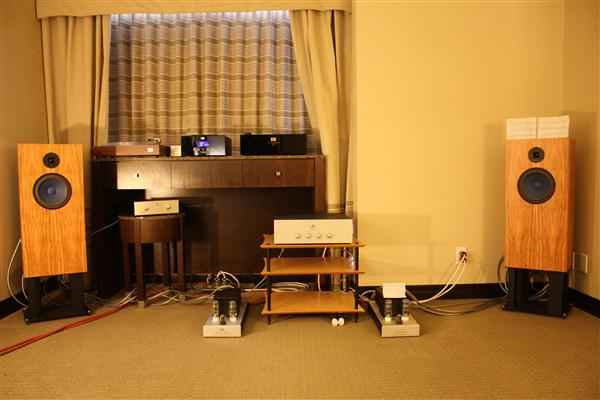 Walking into the Audio Note room, I plopped myself down and began to listen, only to be perturbed by the feeling of deafness in my right ear.  I yawned and swallowed but the symptom persisted, which had me asking the gentlemen in the room what might be wrong.  He pointed me to the note atop one speaker which indicated that a power surge had blown the right mono tube amp.  A terrible shame, since the mono-sound from the single working channel was promising.  In this room two front-ends were featured – a digital front-end involving a CDT3 Transport ($12,000) with DAC 3.1x ($10,000) and an analog front-end comprised of a TT2 Deluxe turntable ($4,500) with ARM3v2 ($2,000) and I01 MC Cartridge ($4,100) with AN-S4 step-up transformer ($6,200).  An M6 preamplifier ($17,500 linestage or $20,500 with phono) was hooked up to a pair of 2A3 mono-tube Empress Silver amplifiers ($10,000/pair).  Speakers were the Audio Note SP3 HE ($9,300/pair) with matching stands ($650/pair). 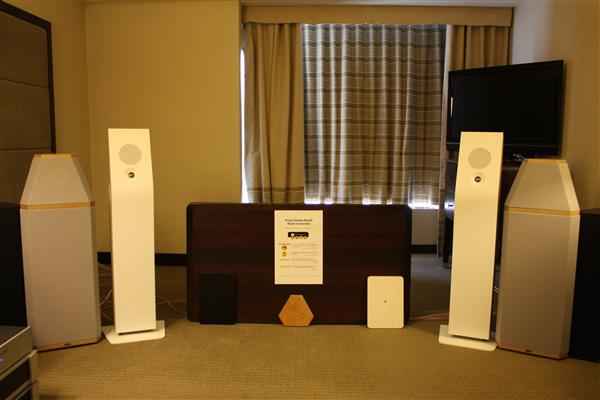 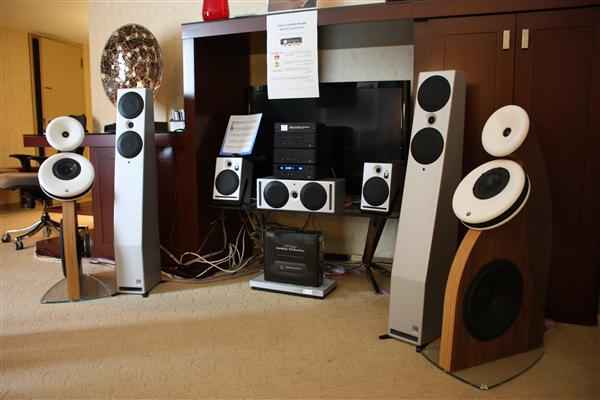 Simplifi Audio was looking to share their ideas on simplified audio solutions via two rooms.  The first room featured PSI Audio A215 active loudspeakers ($7,500/pair) and Gradient Helsinki 1.5 loudspeakers ($6,500/pair) running on a Resolution Audio amplifier ($4,000).  In Simplifi Audio’s second room I was fortunate to receive a demonstration of the Gradient Revolution Active loudspeaker with separate active crossover ($10,000) that was run with the DSPeaker Anti-Mode 2.0 Dual Core solution ($1,200).  The sound was magnificent with extremely fine details evident in the lower mid-range and bass frequencies, unleashed by the DSPeaker room correction.  It was visceral and lucid in its portrayal of a drum track with extremely deep reach, evidently flat down to 20 Hz, while maintaining tautness and accurate timbre.  Impressive to say the least and given the price – perhaps a steal, as well.  Tim Ryan of Simplifi Audio was wonderfully accommodating and very detailed in his description of the products and the technology incorporated within them. 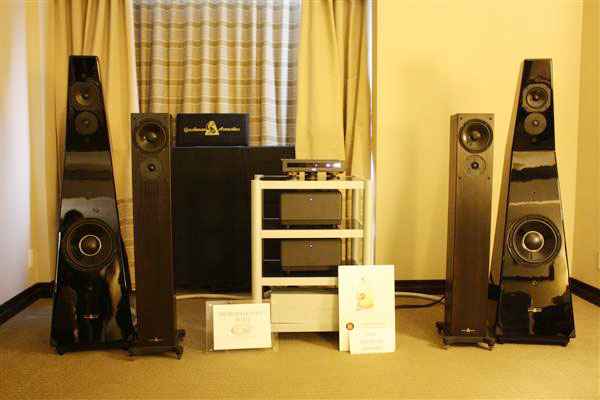 I was pleased to speak to both Ofra and Eli Gershman about their products but sad to find out that just before I arrived, their lovely GAP 828 20th Anniversary Edition speakers ($25,000/pair) had lost a tweeter to an electrical mishap.  Not too sad though, since Eli quickly switched in their new Idol loudspeakers ($2,995/pair).  The Idols performed admirably and seem to be a veritable bargain at their price.  Given their traditional look and small footprint, I expect they will find a place in a number of homes where WAF is a concern.  The Idol’s were run on Quad Elite gear, the CDP/preamplifier ($1,800) and a formidable pair of Elite Series QMP monoblock amplifiers ($1,999/each).  Gerhman Acoustics was also debuting and demonstrating their latest invention – the Gerhman Acoustics LVC for levitation vibration control ($265/set of 4), which utilizes opposing magnets to isolate and eliminate the negative effects of vibration. 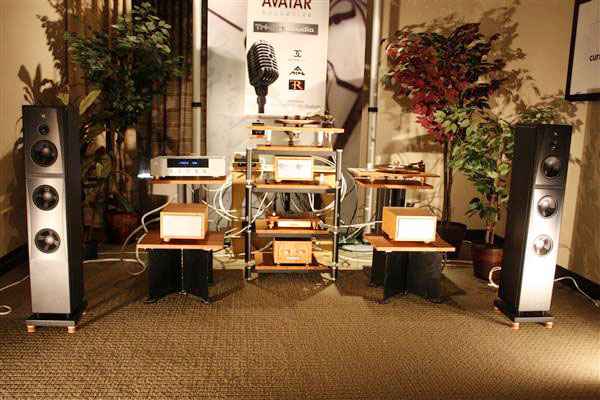 While making my way from room to room I caught a glimpse of an interesting turntable and rack and just had to make my way into the room.  Inside I found a very unique and exotic bundle of products by Tri-Art Audio.  The bamboo constructed and adorned components, including the Tri-Art “The Bam Bam” Turntable & tonearm ($TBD) as well as “The Pebbles” Turntable TA-1 and tonearm ($1,200) were primal in their look and gave me the feeling of connection between the music and its organic origins. Amplification was by way of the Tri-Art Audio “The Bam Bam” Integrated Amp ($1,495) sounding out through a pair of Rosso Fiorentino Certaldo loudspeakers ($5,995). 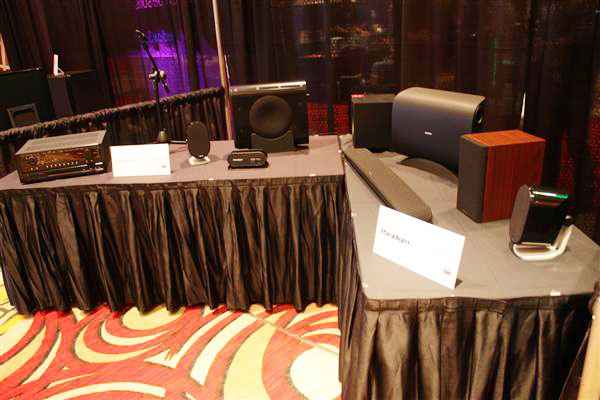 Last but not least, I had a chance to pop by the Canadian Pavillion where I found a number of products from Canadian manufacturers on static display.  Though these products could not be heard they could be looked at up close and in some cases touched.  A few of the displays that caught my eye were those from SimAudio, Paradigm, Sinclair Audio (Erikson Consumer), Reference 3A and LeDoux Acoustique.  This is but a taste of what was at the Salon Son & Image this year – there was much, much more to be seen and heard.  The show provided me with a strong sense of music vibe and love for the equipment that can so faithfully reproduce it.  I’m sure this music vibe was much to do with the show’s organizers as well as the exhibitors but I think it also had much to do with those attending.  This was my first trip to SSI and I can assure you it won’t be my last – till next year.