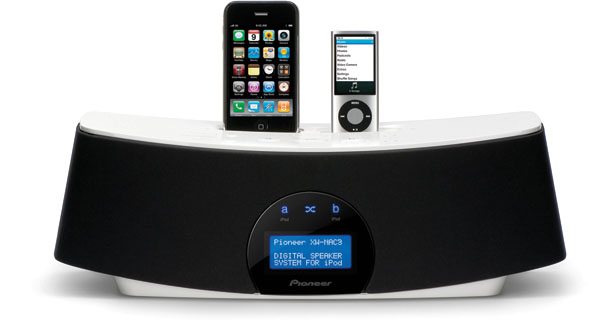 Chances are you already own a portable media player and are using it with headphones and in the vehicle. So why not in your home? I’m always amazed at how many people will religiously use their iPod in the car and through headphones but rarely in their homes. With the availability of digital music and the enormous storage capacity of these tiny music players, an iPod or an iPhone can serve as the integral part of a full media station that can be enjoyed at home and on the road. This can be accomplished in a number of ways with the wide selection of iPod speaker systems or iPod docking stations that are available today. To make your life a bit easier we have pulled together a list with some of the more interesting and better sounding speakers and docks available today for use with your iPod and iPhone devices.
iLuv iMM190 App Station iPod Speaker Dock

The iLuv iMM190 App Station is a new type of dock for the iPhone/iPod that uses the mobile device as an integral part of the speaker dock. Along with the “iLuv App Clock” the speaker dock can be transformed into an alarm clock using the player as a large customizable digital display which also shows the current weather conditions. The iPhone/iPod can be docked in a vertical or horizontal position for watching videos, running apps or playing games. Another device can also be connected to the speaker dock through a line-level 3.5 mm jack. The multimedia speaker dock enhances the audio experience while listening to music, watching movies, or when using VoIP. The dock can be powered from six “AA” batteries or through the supplied AC adapter. MSRP: $90 (approx). www.i-luv.com

Long time audio manufacturer Altec Lansing has introduced a new inexpensive dual docking and charging speaker system, the Octiv Duo – M202. The Octiv Duo is made for use with the iPhone/iPod and is ideal for households with multiple portable media devices. The Octiv Duo provides a way to play and charge two Apple devices simultaneously. A third device can also be charged through the built-in USB port. The low profile compact wedge design of the Octiv Duo makes this an ideal speaker dock where space is at a premium such as in corners or on a night table. A set of line level RCA inputs allow additional playback devices to be connected to the speaker dock. The dock includes a full-featured remote which allows easy playback and playlist access. There is a free Music Mix app that can be used to shuffles songs from both docked players. Also included is the free Altec Lansing Alarm Rock app, which turns the Octiv Duo into a fully functioning alarm clock. MSRP: $99 US. www.alteclansing.com

Released this past summer, the Pioneer XW-NAC3-K packs in just about everything a gadget junkie could be looking for in an iPod/iPhone dock and then some. The XW-NAC3-K features a double dock which allows for playback and shuffling of audio from two Apple devices, at the same time charging both devices. A mini-jack auxiliary input is provided for other portable players as well. The dock has a built-in Bluetooth feature for wireless playback from A2DP profile Bluetooth PCs and cell phones (such as the Blackberry and Andriod phones). When connected to a home network via its Ethernet port, the XW-NAC3-K will provide access to thousands of Internet radio stations and allow for music playback from a DLNA media server, personal computer or other networked devices. The dock also includes a composite video output for playing back content from your iPod or iPhone on your TV. A remote control rounds off this feature-packed dock. MSRP: $449. www.pioneerelectronics.ca

With the Sony AIRSW10TI you can enhance listening to music on your iPod or iPhone by adding that deep resonant bass that is often lacking from other small speaker docks. The wireless subwoofer provides an easy way to add bass to your music without the hassle of unsightly wires. You can also extend playback to multiple rooms in your home by adding up to eight S-AIR enabled speakers. The dock is able to transmit separate signals to each optional S-AIR premium speaker, allowing iPod playback in one room and FM radio playback through the built-in tuner in another room. Both the speaker dock and subwoofer feature an LCD display for communicating unit functions and displaying playback status. The remote control allows full operation of the iPod or iPhone from across the room. MSRP: $399. www.sonytyle.ca

Arcam’s first premium iPod/iPhone system is called the rCube. The rCube is a high fidelity audio system that combines flexibility, portability and compatibility with the very latest Apple devices all in a beautiful package about the size of a football. When not plugged into the wall outlet, the portable rCube is powered from a set of rechargeable Lithium-ion batteries so you can take it anywhere you go. Playback time is noted as up to four hours at “party volume” with up to eight hours possible at more modest listening levels. Thanks to the built-in KLEER technology direct music streaming system, the rCube can playback audio wirelessly from the iPod/iPhone when used with the rWand dongle (sold separately for $99) and stream audio from any PC or Mac computer wirelessly when used with the rWave USB dongle (also sold separately for $99). Those who own multiple rCubes can also stream music from cube to cube or stream music from one iPod/iPhone to up to 8 cubes. Video playback is possible from compatible iPods/iPhones through the composite or component video outputs. The rCube comes complete with a full remote control. The rCube designers have squeezed years of audio design experience into a small, stylish and powerful dock. The result is a sleek, convenient and portable speaker dock with impressive audio performance. MSRP: $849. www.arcam.co.uk

Everyone likes to have fun in the sun and what better way to enjoy the sunny outdoors than with your music collection. The Eton Soulra is the first solar-powered iPod/iPhone speaker dock available on the market to our knowledge. The Soulra is built for life in the outdoors with a rugged/rubberized case, aluminum body and IPX-4 Splash proof rating. There is also an audio line input so other devices can be used with the speaker dock. The internal Lithium-Ion battery offers about 4 hours of playback. There is a battery charge indicator and the batteries can be charged via the supplied AC charger in about 4 hours or through the solar cells in about 10 hours. MSRP: $199. www.etonsoulra.com

The S715i is the new and inexpensive portable iPhone and iPod speaker system from Logitech. This small portable speaker system is jam packed with a total of eight drivers – two 3-inch neodymium drivers for the mid range, two 1/2-inch neodymium tweeters for the high notes, and four 2-inch passive radiators for the bass. This all adds up to big sound in a relatively compact and convenient package. The portable speaker dock can be powered from the included AC power adapter or through the built-in nickel-metal hydride rechargeable battery pack. Battery operation offers around 8 hours of playback at modest volume levels. The S715i system includes a standard 3.5 mm stereo which will allow playback from any portable music player or a computer. There is a remote control that allows the basic playback controls. A nice travel bag is also included with the system. MSRP: $169. www.logitech.com

The SR-100i may borrow the styling cues from the distinct Bowers & Wilkins Zeppelin iPod speaker and it looks nothing short of gorgeous. It provides a wide variety of playback options including a retractable iPod/iPhone dock (which also charges the device), a slot-it CD player which supports CD, CD-R/RW, MP3 and WMA discs and FM radio. Other playback options include an auxiliary RCA input and mp3 playback support through the USB port. The bass-reflex speakers are two-way consisting of a 1.25-inch tweeter and 3.5-inch mid-woofer. The remote control allows full operation of all iPod functions. MSRP: $179. www.teac.com

The ValveDock MKII features an iPod/iPhone dock (compatible with all iPods except the iPod Shuffle) and a separate hybrid tube amplifier. The hybrid amplifier uses a tube input stage and a solid state output stage which can deliver 25W per channel into 4 ohm speakers. The vacuum tube processing provides warm and rich audio characteristics that are often missing from other iPod docking stations. For increased flexibility the vacuum tube amplifier can interface with other audio devices through dual RCA inputs and theUSB interface provides the ability to play digital audio files through the amplifier directly from your computer. The full-function remote control allows complete control over all iPod/iPhone functionality. The warm audio reproduction, flexibility, attractive design and modest price make the ValveDock MKII an ideal choice for a small HiFi system. MSRP: $449 (without speakers) and $599 (with speakers). www.fat-man.co.uk

For the HiFi enthusiast looking to take their iPod/iPhone/iTouch to the next level, the new Wadia Digital 171iTransport can help. The 171iTransport offers pure, bit-perfect digital output, allowing these mobile media devices to be transformed into a high-end media server. The transport bypasses the internal DAC of the mobile device allowing the use of an external, higher quality DAC. The new 171iTransport builds on the success of its previous model adding iPhone compatibility and improved performance thanks to many power supply component upgrades and audiophile grade connectors to interface with a DAC, A/V receiver or other audio components with a DAC. High-resolution video signals can be passed from the player through the component video connection. A feature-rich remote control allows convenient navigation through albums and playlists. The high-end transport is housed in a cast aluminum chassis that includes vibration absorbing and isolation cones. The 171iTransport is the perfect marriage between digital convenience and performance. MSRP: $599 (approx). www.wadia.com