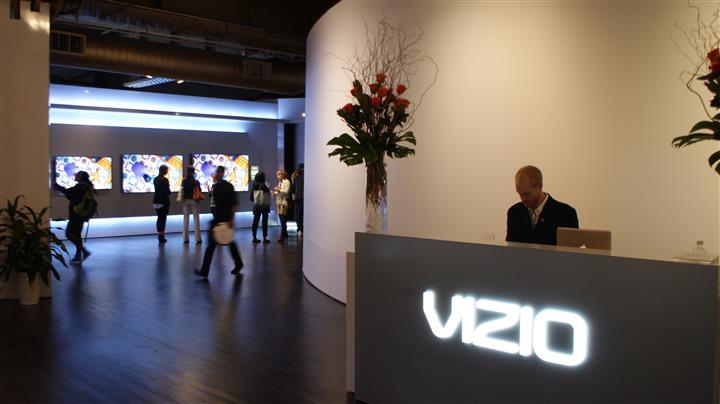 On the busy little street of West 18th in New York City, VIZIO was making more noise than the honking cabs and the emergency sirens that’s akin to the city. In an event on April 13, 2015 VIZIO revealed its 2015 line-up of television and audio products, and this year all the buzz will be about High Dynamic Range and Ultra HDTVs. I flew down from Toronto to the event in order to catch a glimpse of what’s to come and to view with a critical eye of what the noise of excitement is all about. VIZIO has proven to the Canadian market and to the CANADA HiFi magazine that they mean serious business, since the fall of last year when the company began offering its products north of the US border. Its TVs, across the various series, offer impressive performance at surprisingly affordable price points. Even the high-end UHD TV models are offered at prices that won’t scare away consumers. Among the modern décor and neutral gray lighting of the venue, and enthusiastic VIZIO product managers, this product launch paved a clear path forward to show the major manufacturers that VIZIO is standing firm in the high performance category. 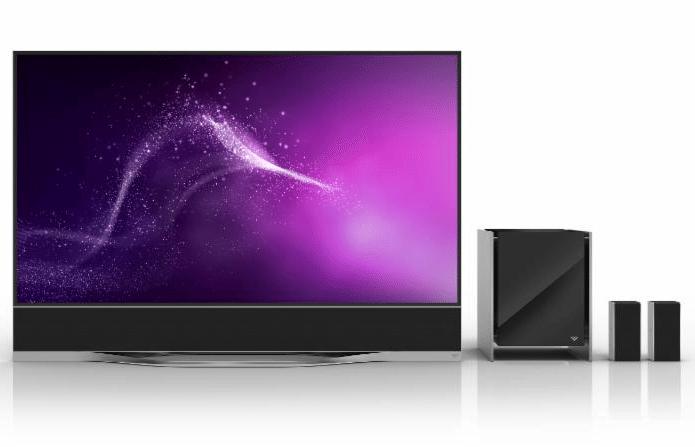 The most exciting highlight of the event was the announcement of the High Dynamic Range Reference UHD (or 4K) television series which supports Dolby Vision, Ultra-Color Spectrum for a wider colour gamut, and a whopping 384 active LED zones for superior contrast ratio over competing LCD panels. Dolby Vision is video metadata that provides specular picture highlights beyond 800 nits. In other words, on localized areas of the screen, the brightness can be very high to bring out the finest shimmers, the brightest fireworks, and the most beautiful sunsets. Both the content and the screen must work together to make this happen. John Hwang, VIZIO Director of Product Management, explains “We partnered up with Dolby Vision to push boundaries of product development. The industry is still playing in 8-bit, Rec.709 HDTV, which is an outdated format compared to the advancement in displays. We’re going out to Hollywood to show content in HDR and how it can benefit them. Warner Bros. is with us with more studios to follow.”

There’s no misleading anyone here; from the images I witnessed on these screens, the VIZIO Reference series is an entirely new visual treat that all consumers should enjoy, not just serious video enthusiasts. The event provided side-by-side comparisons of the wider colour gamut and Dolby Vision enabled content on a VIZIO Reference Series TV, sandwiched by two competing televisions, one LCD and one plasma. 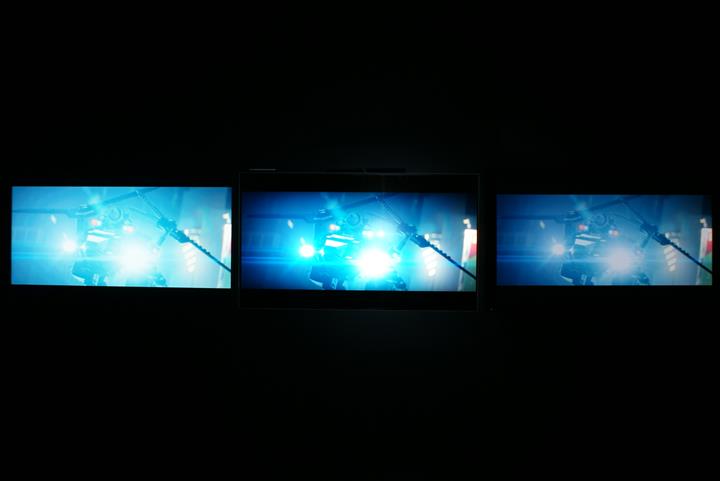 The wider colour gamut in combination with Dolby Vision (and HDR content) easily left the other two televisions looking dull by comparison. This HDR material was streamed from Wal-Mart’s VUDU service currently available only in the U.S. While it remains to be seen when HDR content will be available for streaming in Canada, consumers will be able to view HDR content once UHD Blu-ray players / movies hit the market later this year. Roland Vlaicu, Vice President of Consumer Imaging at Dolby Laboratories, Inc., told me that “Dolby Vision created a new system of colour production for content creators with specular picture highlights as high as 10,000 nits. Using the metadata attached to the content, Dolby Vision can determine the best way to scale and display this material to match the design of the television. The content capability will always be there as television technology continues to drive forward with new capabilities.”

Not only will the Reference Series be able to deliver a whopping 800 nits across the entire TV panel, but picture highlights will be even brighter (VIZIO did not specify exactly how bright) and its 384 zone local dimming panel will assure the widest possible contrast. The Reference Series will be available in a 65” model and a whopping 120” model. This Series will also include a full surround sound audio package in the box which includes a front sound bar, surround speakers, and a subwoofer. VIZIO does not currently plan to retail the Reference Series TVs by themselves, for those already equipped with home theatre systems. 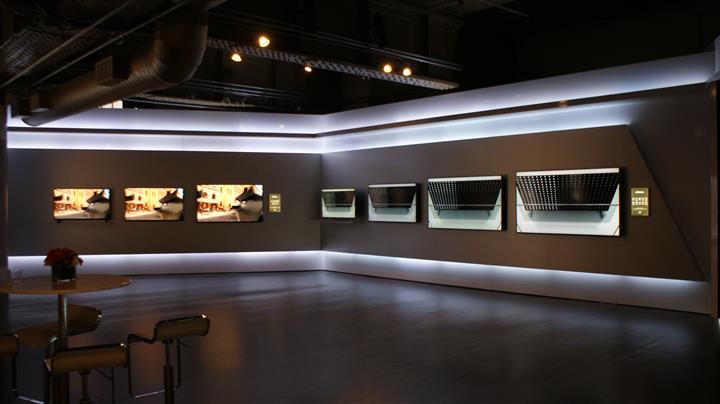 VIZIO M-Series – UHD For Everyone

I’ve calibrated many of VIZIO’s previous generation 1080p M-series TV models in the last few months. I always found them to offer great value, and excellent colour and grayscale performance. The M-Series however, launched at this event, is getting a significant boost for 2015 – every model from 43” to 80” is now going to offer UHD (or 4K) resolution. This revamped series will also offer UHD apps as well as an ultra-fast 802.11ac dual-band WiFi, alongside VIZIO’s V6 six-core processor to keep the data flowing smoothly. These performance features will help to future-proof the M-Series for a while to come. Parin Shah, VIZIO Senior Product Manager, said that in addition to 4K, “Local dimming is a high-end feature found in all of our TVs (with 32 local dimming zones in the M-series). And with active pixel tuning, we can open up the details at the pixel level to see the finest details.” 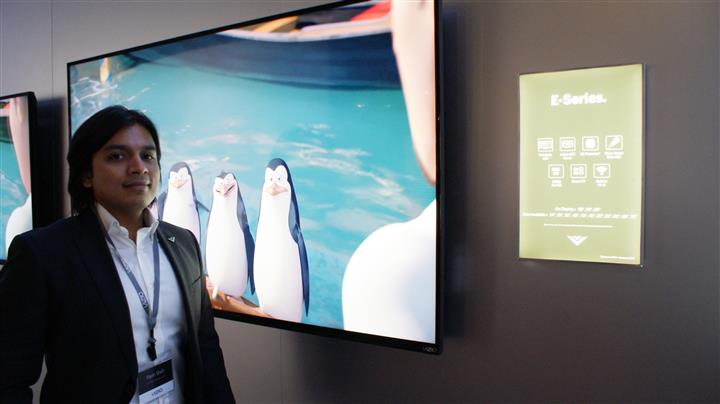 Even though the room was adorned with high-end UHD displays, VIZIO also showed that it is keeping to its goals of offering high value / high performance TVs that are accessible to all consumers. In addition to a visual redesign of the TV base, the 2015 E-Series offers 1080p resolution and a lower number of local dimming zones (16 to be exact). VIZIO is the only TV manufacturer to offer local dimming in an entry-level series, which is quite an achievement. Local dimming allows LCD / LED TVs to achieve lower black levels, and hence a higher level of picture quality. Victor Shu, Senior Director of Merchandising, demonstrated VIZIO’s local dimming verses a competitor’s LED product to me at the event. “We have greater control over each of these zones. Greater contrast, more depth, detail, subtleties in dark scenes. Colours have better scale and depth.”  The picture benefits were very obvious. To show how this technology works, John Hwang, VIZIO Director of Product Management, pointed me to display of two TVs, one from VIZIO and the other from a competitor, each with the diffuser layer of the screen removed to reveal the LED backlight behind the screen. The VIZIO TV utilized a local dimming backlight, while the competitor model utilized an edge-lit backlight. This demo made it very easy to see why the standard 8-zone edge lit models of most manufacturers simply cannot produce the black levels of local dimming models. 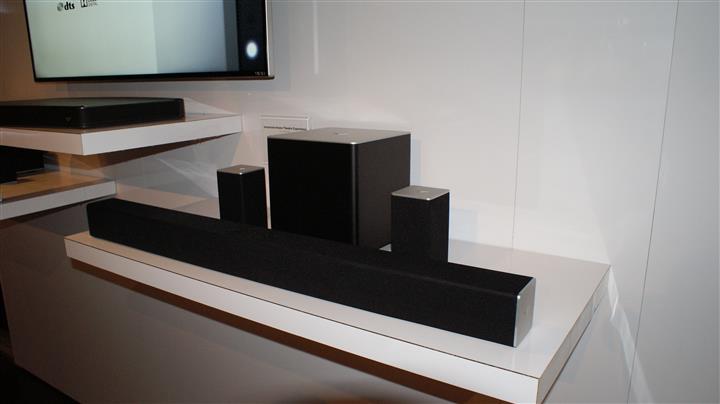 While this event highlighted mostly video products, VIZIO did have some new Sound Bars and Sound Stands to demonstrate as well. There are seven new models in total for 2015, each designed to fit neatly between your TV and the TV stand. Malia Tumacder, VIZIO Product Marketing Manager for Audio, showed off three systems in a dedicated audio room at the event. From the smallest 2.1 Sound Stand to the largest 40-inch 5.1 Sound Bar, equipped with both passive and active drivers, the sound filled the room quite nicely, each sounding more rounded and full bodied as we moved up the product line. These audio products are certainly better alternatives to the TV’s built-in speakers, for those who just don’t have the space for fully dedicated sound system in their space.

Look out for VIZIO product reviews in future issues of the CANADA HiFi magazine. In the meantime, check out www.vizio.com to learn more about VIZIO products.

All pricing is in USD:
Reference Series Full-Array LED HDR UHD TV Pricing to be announced