A Brief Story About Toronto HiFi, CANADA HiFi and the Evolution To NOVO

My love for music and technology began when I was a little boy, while my professional journey in these industries began just over 13 years ago, when I started this magazine. Over the years our magazine has slowly evolved but this fall it will take its most significant leap forward when CANADA HiFi becomes… NOVO.

A momentous event such as this deserves a telling of how it all began.  After graduating university with a BSc in computer science in 2001, I scored what I thought was a ‘perfect job’ as a systems analyst.  However, it took me only nine months to realize that I wasn’t well suited to work from a cubicle of a big corporation.  I decided to turn my attention to audio and technology instead, subjects that I was passionate about for as long as I can remember. Both of my parents are electronics engineers so it’s no surprise that I grew up around home-made stereos and other electronics components. Music has always been a part of my family life – I recall listening to The Beatles with my parents as far back in time as I can remember.  My dad played guitar and as a young boy I learned to play piano. I also picked up the guitar in my early teens and still play today.  My dad also taught computer science and so I was lucky enough to have access to a home computer at a very young age.  Music and technology were intrinsically linked for me, from the beginning.

The idea of publishing a magazine about audio and video was born as I was nearing the end of university.  I envisioned a widely distributed, free publication that would connect with a broader audience than the hifi magazines of the time.  A magazine that would capture the attention of music and movie enthusiasts, as well as audiophiles.  In 2002, I had just the opportunity to realize the dream when together with two great high school friends, Janak Handa and Octavio Umana, I launched the Toronto HiFi magazine. Alas, our professional collaboration lasted only a few months, as my friends were unable to devote the countless hours needed to translate the dream into a business.  Octavio did remain close to the publication over its first couple years, contributing many reviews and articles, as well as helping me define the initial direction for the magazine; something I will forever be grateful for.  I’m also very happy to say that the three of us have remained the best of friends to this day – I spend time with both of these guys regularly.  My partner Sarah Ferguson also offered a tremendous amount of time and effort to the magazine from its infancy and continues to do so today.  Sarah began as a copy editor but has progressively taken on greater roles, becoming an editor, graphic designer and advisor on just about everything.  With combined efforts, Toronto HiFi was received very well by the industry and readers in the Greater Toronto Area (GTA), having an initial distribution across just 80 audio video stores in the GTA. 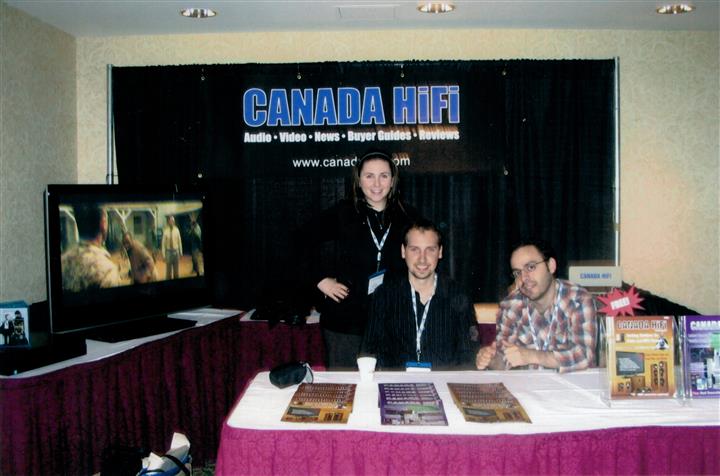 From left to right: Sarah Ferguson, Suave Kajko and Octavio Umana at the Salon Son & Image Show in Montreal, Quebec in 2004.

With the model for the magazine a success and strong positive feedback received, by 2004, the magazine was renamed CANADA HiFi.  The circulation was increased and distribution was expanded to reach all major Canadian cities.  For the next seven years I continued to generate awareness about the magazine to the industry, while entertaining readers about the latest audio and home theatre topics.  At the same time, I built a strong team of writers that were passionate about these topics.  Since the early days, Phil Gold, Shamus Coghlan, Brad Copeland, Neil Underwood, Giovanni Militano and Malcolm Gomes have shared their wealth of knowledge and enthusiasm about audio topics in these pages.  Mike Osadciw has offered unequivocal expertise when it comes to all video and home theatre topics.  Jeremy Phan on the other hand has kept us up to date about the latest audio, home automation and technology trends.  Over the years, I personally learned a great deal from these gentlemen.  In the last couple of years, Douglas Brown, Glen Wagenknecht and Frank Labonte have joined our contributing team, each bringing their passion, knowledge and unique voice to the magazine.  More recently, our team has been expanded to also include David Mitchell, who runs a website called www.audioreview.ca, and Dale Goz, an expert custom audio/video installer.  Another recent addition to our team is Ted Kritsonis, a seasoned technology writer highly knowledgeable about various technology categories.

During the earlier half there were challenges to overcome – it’s tough to keep things new, adapt and grow revenue when you are a fledgling publication in a niche market. Yet my determination, and the dedication of the professional staff I had recruited allowed the magazine to ride the waves to ever greater opportunities.

In 2011, I was looking to expand CANADA HiFi’s contributor team, when I posted a job on our website.  A long-term passionate reader George de Sa responded with great enthusiasm.  With a string of outstanding reviews and feature articles for CANADA HiFi, it soon became apparent that George was destined for greater responsibilities with the magazine, though at the time I didn’t realize just how significant his role would be.  Over the last six years, George has helped me refine just about every element of CANADA HiFi, taking it to new levels.  And, today, as our Director of Marketing and Sr. Editor we work side-by-side collaboratively to build, develop and take CANADA HiFi into the future.  It has been an enormous pleasure to work with George and I’m thrilled to say that he has not only become instrumental to the success of this publication but also a great friend.  I could easily go on but this is a story of its own, for another time.

This brings us to today and the future – meet NOVO, the successor to CANADA HiFi and greatest step forward this publication has ever seen.

At the TAVES Consumer Electronics Show, held this fall (Oct. 28 to Oct. 30), NOVO will be officially launched, as the new name of CANADA HiFi.  NOVO will bring a fresh new look and style to audio video content and expand its reach into new realms.

NOVO will introduce you to a curated mix of hifi, home theater, technology and lifestyle topics.  If you’ve enjoyed the hifi and home theatre content that our publication has delivered over the years, don’t worry because NOVO will bring you all that and more in a more focused and refined fashion.  You’ll find even more hifi and home theatre articles per issue, with each being more concise and to the point, with less technical jargon, just what today’s readers want.  Equally as important, every issue of NOVO will serve up exciting technology and lifestyle content that we’re sure you will enjoy, whether you are a seasoned or new enthusiast.  This expanded content will cover topics such as tech toys, robotics, virtual & augmented reality, 3D printing, home design, etc.

Our unique, free distribution model will be expanded to furniture stores, home & lighting stores, car dealerships, and even some universities and colleges.  So you’ll be able to find NOVO in more places and we expect to reach the hands of tens of thousands of readers, like no other traditional hifi magazine can.  This formula has proven itself successful with the TAVES Consumer Electronics Show, which has made it the largest of its kind in Canada and among the top in North America.

Why the name NOVO?  It’s a derivation of the Latin word Nova, meaning new, which is exactly what it is.  The publication will bring new insight, new products and new interests to consumers.  The simplicity of the name makes it more stylish but also its uniqueness will build curiosity, inspiring consumers to explore its pages.  In addition, NOVO is a name that knows no national boundaries, engendering worldwide appeal.

Though CANADA HiFi will become NOVO this fall, with the Oct/Nov 2016 issue to be launched at the TAVES Consumer Electronics Show, you’ll still find a cover reference to CANADA HiFi for the next 12 months.  I invite you to take a look at the prototype cover and a couple of page designs from NOVO on this page.

George and I have been working relentlessly on this evolution of the magazine for more than a year and we trust you will be immensely happy with the new direction, look, feel and content under NOVO.

We would like to thank you for reading this publication over the years and warmly welcome you to continue with us, as we embark on this thrilling new adventure! 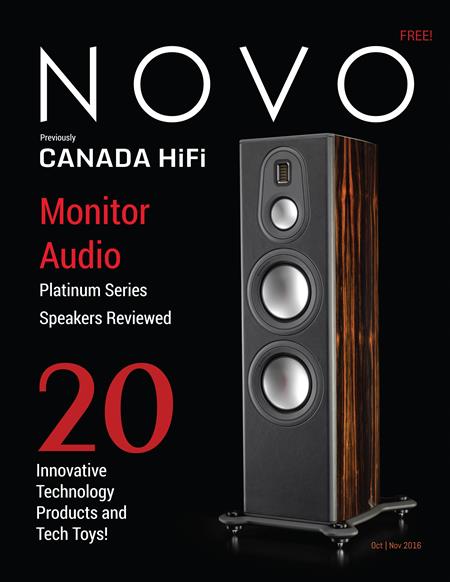 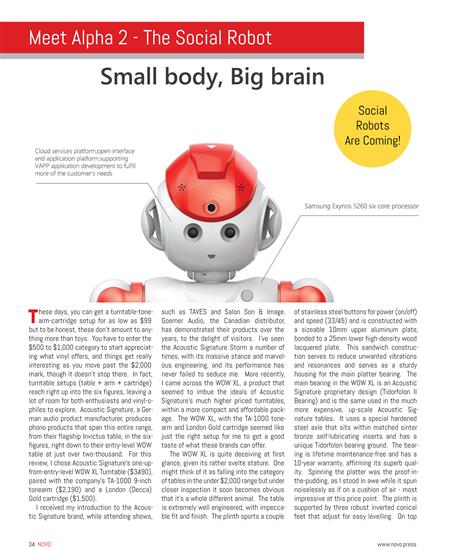 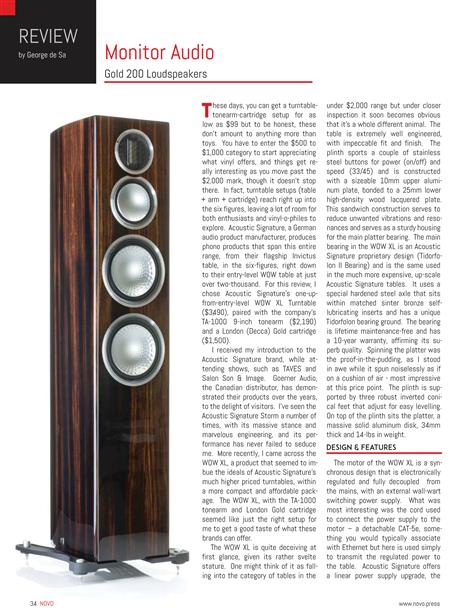