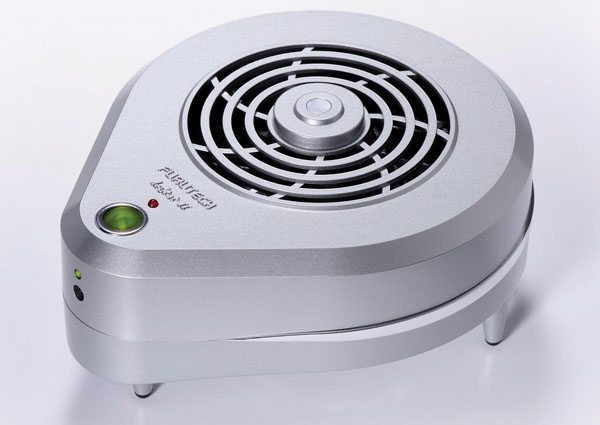 There are numerous factors that may impede the optimum performance of various components in an audio and video system. Some are well known, while some not so clear cut. As avid audio video enthusiasts, many of us strive to seek and destroy any deleterious anomalies associated with our set up and there are literally hundreds of “tweaks” or remedies available to assist us, whatever the issue may be.

There is a particular issue that does not come up regularly in conversation and that is static charge and the manner in which accumulated static charge affects equipment, cabling and even the media we play on our systems. In this review I’ll be taking a look at the Furutech Destat II ($495), a device designed to remove static and dust from analog and digital components and media. The Destat II is an updated version of the original Destat device and features an improved ion flow generator which uses more emitters than in the previous version.

The timeliness of this review is interesting as I had been dealing with static related issues in my AV system just prior to receiving the Destat II. For some inexplicable reason, the fuses in my ModWright Instruments LS36.5 preamp kept failing over the last few months. Upon analyzing the events that led to the issue, I determined that I never bothered to ground myself prior to manually switching the preamp on and off. The Persian rug in my AV room turned out to be the culprit, as walking across it built up a serious static charge in my body and the carpet. Our bodies can accumulate and discharge a static charge as high as several thousand volts and this can potentially damage gear and affect cables and even the round shiny discs we play. I inspected my system to determine if any parts of it were making physical contact with the rug and sure enough found a few points of contact. The power cord and the HDMI cable running from my projector to the AV receiver, were both underneath the carpet. Relocating the two cables so that they no longer made contact with the carpet resulted in a revelatory experience. Both the audio and video aspects of my system’s performance witnessed improvements. The AV receiver’s FM and multi channel audio performance became exceedingly transparent and benefitted from added dimensionality and dynamics. The two channel performance of the system was surprisingly improved as well, proving that negative aspects in one part of the system can pollute the entire chain. Even the video performance of my setup improved, offering deeper blacks and adding a three dimensional quality to the image. I was now convinced that static charge was a critical area that needed to be addressed within my system.

Along came the Furutech Destat II to the rescue and not a moment too soon. The Destat II is a small handheld device, designed to eliminate static charge in equipment, cables, LPs and any music and video discs. Powered by a rechargeable lithium ion battery, its powerful fan removes any dust while a perfect blend of negative and positive ions emitted from its ion flow generator eliminate static. And don’t think that this is snake oil. It may not be a well-known fact, but in the manufacturing industry, balanced fan-blown emissions of negative/positive ions on plastics, paper and textiles are routinely utilized in manufacturing to reestablish an equal balance of positive/negative ions, thereby eliminating electrical charges in these materials.

So how did it work for me? To run a treatment, you first need to select the 10 or 20 second cycle with a switch and then hit the ‘go’ button. Placing any optical disc on the Destat II and treating both sides with the 20 second cycle resulted in a noticeable improvement in audio and video playback. During the treatment, I could actually see the disc becoming more reflective with the rainbows on the disc becoming deeper in hue and intensity as the cycle ran its course and micro dust was repelled. Treating my Esoteric X-05 CD/SACD player’s polycarbonate tray also further improved playback performance. The resulting sound was more analog in its nature, offering a dead-silent background and increased dimensionality. Overall, the sound was more relaxed and effortless. Leading edge transients and micro dynamics were more readily apparent. Rock and alternative music, especially dense mixes like Radiohead’s Kid A album, benefited from a “sorting” of the arrangements, with sonic details placed in precise spots in the soundstage. I noticed an even further improvement when listening to classical discs. The non-amplified, acoustic instruments had a defined space in the soundstage, never wavering, even during huge crescendos. Blu-ray video playback was also clearly enhanced, producing a smoother image and a more defined rendition of colours and hues. Inner details and spatial cues in movie soundtracks were natural sounding and more precise.

So there is no question that treating optical discs with the Destat II had positive effects on their playback in my system. The effect on the components and cables was more subtle but also definitely further refined the sound of my gear.

The Furutech Destat II is one of the most effective system “tweaks” that I have ever experienced. Treating discs prior to playback and enjoying the benefits have become a part of the routine for me. I’ve also started treating my gear and cabling on a periodic basis. The Furutech Destat II gets my seal of approval – highly recommended!

About the Author: Neil Underwood