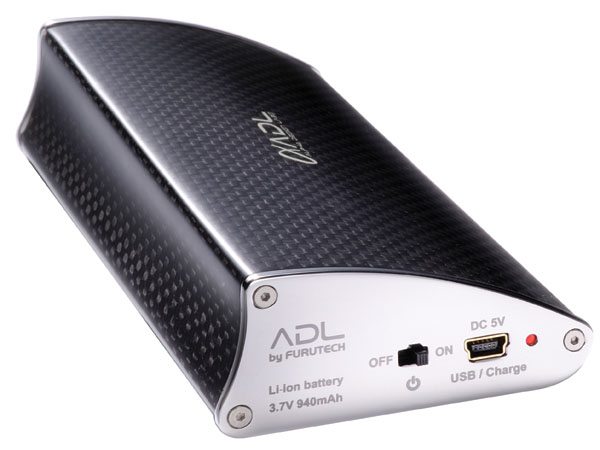 Think of how many music fans listen to music using headphones or earphones plugged into their Apple devices, smart phones, PCs or Macs. As an increasing number of consumers become aware of the low fidelity sound coming out of these devices, many are looking to improve their listening experience by using portable and table-top headphone amplifiers and DACs. It’s no surprise then that there are plenty of options when it comes to compact headphone amplifiers and DACs, many in the $500 range. As with any audio/video component there are wide variances in performance and features when it comes to these devices so it’ll serve you well to be informed before making a purchase.

The ADL Cruise is actually the second ADL headphone amplifier/DAC reviewed in these pages. The company’s first offering, the table-top GT-40 USB DAC/headphone amplifier/phono stage certainly set the benchmark for performance and versatility at its price point. The Cruise offers fewer features, but promises exemplary performance and a compact form factor which makes it ideal for those on the move. The build quality of the Cruise certainly imparts the sense that something special will occur once you put the pedal to the metal. This device is luxuriously encased in a non-resonant carbon fiber shell, with mirror-polished non-magnetic steel sides. The unit exudes quality in every sense and at 65 by 120 by 28 mm, is a perfect size to conveniently slip into one’s pocket for listening on the go. The Cruise has a high quality volume control dial on the front plate, which also houses an analog 3.5mm gold plated input and a 3.5mm headphone output. The Cruise will gladly drive headphones rated from 12 to 600 ohms impedance. On the rear plate is the on/off toggle switch and a gold-plated USB input (mini B type). The USB input doubles as a recharging jack for the internal rechargeable lithium ion battery when used with the supplied AC/DC mini power adapter. The internal battery takes about 5 hours to charge and offers up to 80 hours of music playback. When listening to the USB input, the unit is powered by the computer’s USB output. Using the Cruise with a laptop will provide the opportunity for a completely “off the grid” headphone system, meaning that the system won’t have to rely on the contaminated power from an AC wall outlet. The Cruise is supplied with a number of goodies in the box: a one meter Furutech USB mini B type to USB type A cable, a Furutech analog cable terminated with 3.5mm jacks, a carrying case that replicates the carbon fibre finish of the Cruise and a cleaning cloth to maintain that high gloss finish.

Now let the fun begin as I take the ADL Cruise on a test drive. My source was a MacBook laptop running on battery power, while I listened to the music on a pair of Grado HF-1 headphones. I alternated between the provided USB and analog cables, running between the MacBook and the Cruise, during my tests. I played music of varying quality from my iTunes library.

First track on the agenda was Muddy Water’s “Long Distance” from the remarkably well recorded 1963 album Folk Singer. I’m very familiar with the SACD version of this album so I had a hi-rez benchmark to compare with. The magic of this recording is the uncannily accurate localization of the performers within the soundstage, which exactly replicates their positions as shown on the cover photos of the actual recording session. Using the USB input I was amazed at how close the spatiality of the headphone experience mimicked the soundstage of the SACD version when listening to it through loudspeakers in a traditional two channel system. Buddy Guy was clearly strumming his guitar off to the right of Muddy’s tasteful pickings. Acoustic stand-up bass player Willie Dixon was located just behind and left of Muddy and drummer Clifton James was at the far left. The huge dynamic range and clarity of the instruments and Muddy’s voice were all maintained via the digital USB input and headphones. Attack of guitar strings showed excellent initial transient response and decay was realistic. Heft of the bass drum, tonality and timbre of the stand-up bass and the deep resonant quality of Muddy’s voice indicated an ability to accurately resolve deep bass fundamentals. This was very impressive performance right out of the box. Maintaining the same volume, I then connected the analog input from the MacBook’s built-in soundcard to the 3.5mm input on the Cruise. The only differences I determined were a slight diminishment of depth of the soundstage, slightly reduced dynamics and bass was not quite as deep and resonant. The fact that I was running the MacBook “off the grid” and using the internal soundcard (which is of decent quality) indicated that given a good source, the analog input on the Cruise was indeed of excellent quality. For those who intend to use the Cruise as a portable headphone amp this is great news.

Next up was Radiohead, my benchmark band for determining a system’s ability to sort out dense, complex rock mixes. I started with the track “Nude” from the album In Rainbows. This track was a touch more challenging for the Cruise in both USB and analog modes. The top end was just a bit strident but the various sound elements in the mix were accurately located, although not as sonically enveloping as playback on my two channel system. The mid range was excellent, voices had an accurate timbre and Tom Yorke’s vocal quirkiness was coherent. There is so much happening in Radiohead tunes that headphones just can’t do justice to the huge 3D soundstage but the overall sound was certainly enjoyable. Switching to the analog input represented the biggest difference of all the tracks I tested. The soundstage got more muddled and highs were edgy but the mid range had similar clarity to the USB input.

TV On The Radio is an exciting new, high energy band that is guitar-driven. Their track “Wolf Like Me” is fast and ferocious but clean in its presentation and arrangement. This track actually sounded pretty consistent between the USB and analog inputs. Vocals were clear and intelligible, even when the guitars were cranking and the percussive elements played loudly.

The Jacques Loussier Trio is one of my favourite performers whose modus operandi is to offer classical treats reworked into a contemporary, jazzy interpretation. “Fugue No. 5 in D Minor” offers Loussier’s trademark piano recorded impeccably, with a wonderful stand-up bass solo and tasteful percussion. Using the USB connection, the piano sounded full-bodied with a natural timbre to die for. I could actually hear the resonance of the wood of the stand-up bass and the percussion was delicate, yet the leading transients were realistic. Given that the piano is the most difficult instrument to record and playback accurately, it came as no surprise that the biggest difference between the USB and analog connections was in the way the piano notes sounded. The piano performance was flatter and less palpable via the analog input, with decay and sustain diminished, compared to the USB playback.

Last up was a track from The Beatles Love album, “Within You Without You” – an excellent remix of the Beatles classic that provides a contemporary slant on an older recording. The incredible dynamics and transparency of this remastered track shined through via the USB cable. The tom tom drums had a rounded and analog sound that was incredibly life-like. The swirling sound effects at the end of the tune exhibited inner details that I actually didn’t pick up on when listening to the track on my two channel system. Switching to the analog input the sound became slightly “tinny” with not as much depth to the presentation. However bass and mid range performance were on par with the digital input.

The ADL Cruise portable headphone amplifier is a perfect little upgrade for music lovers who would like to enjoy much higher quality sound from their headphones, whether at home or on the go. Given its $520 price, it offers performance, value and ergonomics that place it comfortably above the competition.

About the Author: Neil Underwood