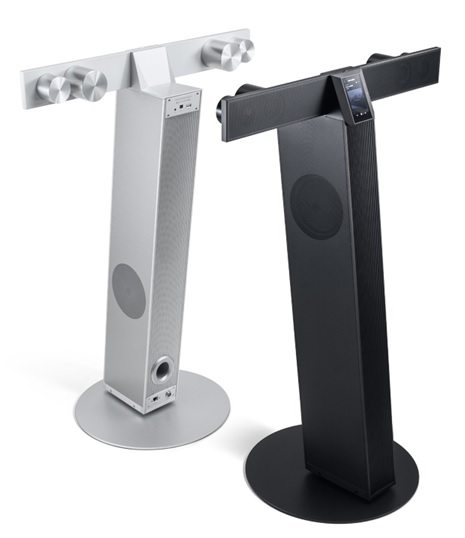 The Astell&Kern AKT1 serves the needs of those searching for a high quality lifestyle audio product that easily fits into smaller spaces, while also complementing a broad range of decor. The AKT1 intends to provide audiophile-quality high-resolution sound withouth the need for bulky components and large speakers.

The AKT1 contains six speakers in a 3-way configuration, featuring two 0.75” tweeters, two 2” midranges, and two 6.5” woofers with a 4th order crossover. The speakers are driven by a hybrid amplifier system, combining the best of analog and digital amplification for the best sound possible. The AKT1 tweeters are driven by an analog amplifier, providing crisp, clear highs, while a digital amplifier drives the midrange speakers and woofers, giving the speakers rich mids and deep, clean bass.

Playback sources include microSD, optical and auxiliary inputs. The AKT1 includes wired Ethernet, 802.11 b/g/n Wi-Fi, Bluetooth 3.0 with aptX and DLNA networking support, allowing the AKT1 to stream high resolution music from a network attached storage device, computer, smartphone, portable player or any device compatible with the DLNA protocol. Also included is support for a variety of streaming services and Internet radio stations, which can be accessed and controlled via the 4” LCD touchscreen on the unit. With the AK Connect app for iOS and Android-based smartphones and tablets, you can control playback on the device and stream music located on your device directly to the AKT1.

The Astell&Kern AKT1 will be available by the end of August 2015 at a MSRP of: $3,700 U.S. Look for more information on this and other Astell&Kern products at: http://www.astellnkern.com