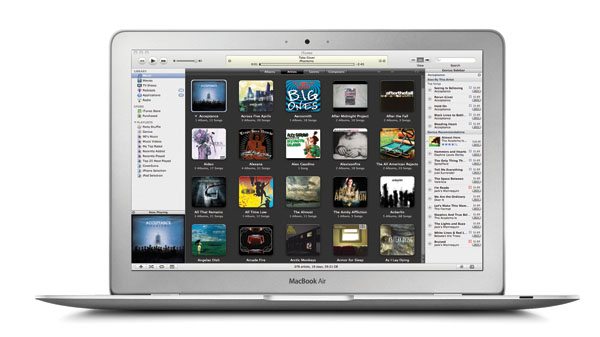 In the beginning, there was only live music. By 1877 Thomas Edison recorded a vocal rendition of “Mary Had A Little Lamb” on his phonograph and in time came analogue recordings on vinyl and tape. Today, we live in a digital world and though the last few years have shown a small resurgence of music on vinyl, digital formats are by far the dominant method for music storage and playback. In fact, digital music file downloads have far surpassed sales of any physical music medium, spawning a plethora of digital file formats and audio products, which continue to evolve rapidly.

For me and many other audio enthusiasts, there seems to be a greater understanding and comfort with optical-disc based music media such as CD, SACD, DVD-Audio, Blu-ray Audio etc.; they just seem to be…well…more physical, less techy and less frequent to change. However it’s hard to ignore the benefits associated with a non-disc based digital music system. With the right components in place, a digital music playback system is capable of true high-fidelity sound, allows access to your entire music library without ever looking for or changing a disc and lets you add new albums or songs to your library in just seconds, by purchasing them online. Combine these benefits with a sleek colour, touch screen remote or an iPhone/iPad/iPod touch and you’ll end up with a modern digital music system.

Before we can start considering the different digital music playback alternatives, we need to begin by understanding a little about the more prevalent digital music formats that currently exist.

Digital Music Formats
The lion’s share of digital music is in the form of PCM (Pulse Code Modulation) or LPCM (Linear PCM) audio data; however, to make labelling, cataloguing and basic organization of PCM data possible, file formats were created. Formats are like digital containers for the music data, they provide form around the raw PCM music data. Today, many formats have been created but there are three main types: uncompressed, lossless compressed and lossy compressed.

Lossless Compressed
Lossless music files use a format container and a compression algorithm program that is referred to as a codec. The codec serves to compress the PCM data by only removing redundant and predictable data. Popular lossless formats / codecs include ALAC (Apple Lossless Audio Codec), FLAC (Free Lossless Audio Codec) and WMA (Windows Media Audio) Lossless. For all intensive purposes, lossless formats maintain both the integrity, and quality of the original uncompressed file. Lossless is a hi-fidelity format.

Lossy Compressed
Lossy music also involves a format container and codec but in this case, the compression involves a removal of some of the actual PCM music data and its permanent loss. The data removed from the file is substantial with the end result being a significantly smaller data file, while maintaining a level of quality intended to satisfy the average listener. Popular lossy formats include: AAC, WMA lossy and MP3. No lossy format would or should be considered a hi-fidelity format.

With the various formats covered, we can now dive into some other aspects of digital music, namely sample rates, bits and bytes. 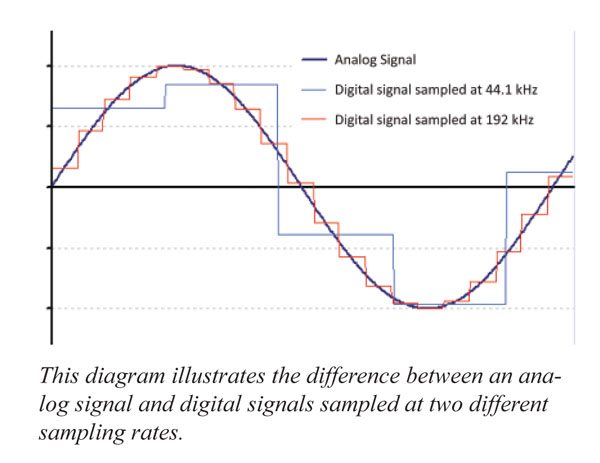 Bits & Bytes
A bit is a binary digit and eight bits make a byte. Bit rate is a measure of digital data transmission and is typically expressed in bits-per-second (bps) or bytes-per-second (Bps). The higher this rate, the higher the data transfer. You can think of a bit as only a little bit of a byte (1/8th). Digital music files can also have stated bit lengths, which are usually multiples of 8 – for example16-bit or 24-bit. The higher the bit length, the better.

The resolution of uncompressed and compressed lossless music files is generally quoted as: bit length (in bits) / sampling rate. For example, the CD standard would be: 16-bit / 44.1 kHz. This could be translated into a bit rate of: 16 X 2 (2ch stereo) x 44,100 Hz (cycles-per-second) = 1,411,200 bps or 1,411.2 kbps. Notice, the CD bit rate is 4.4 times greater than the highest possible MP3 lossy bit rate of 320kbps, clearly illustrating the fact that MP3 is not a hi-fidelity format. On the other side, it’s worth noting that hi-resolution (hi-res) files are those with a greater resolution than the CD standard of 16-bit / 44.1 kHz.
When downloading music, using sites such as iTunes, Napster, HD Tracks or iTrax or when ripping CDs to your music collection, to make hi-fidelity possible you want to ensure your download or rip is uncompressed or lossless. If you must compromise with lossy, then wherever possible, choose the highest bit rate, like 320 kbps, to get better sound quality.

Portable Music Player or an iPhone/iPod
Playing digital music through your stereo can be as simple as connecting a portable music player, such as an iPhone/iPod, to your stereo system – typically to the receiver, pre-amplifier or integrated amplifier. You can use the player’s headphone jack with a Y-adapter cable that has a headphone plug on one end and a stereo pair of RCA plugs on the other. The digital music files and the playback interface reside on the portable music player, so playing music is as simple as hitting the ‘play’ button on your player. However, sound quality will be poor, since in this case we are relying on the portable player’s internal digital-to-analogue converter (DAC) which is of very poor quality. Plus storage capacity is limited to that of the portable device – not good especially when it comes to higher quality lossless music files that are of considerable size.

Computer or Laptop
Your computer or laptop (PC/Mac) can be easily used as a digital music player. As with the portable music player, a headphone output could be used but with the same limitations mentioned above. Again, the better method is to use a digital output (Toslink or SPDIF) on the computer’s soundcard to connect to the stereo system or a separate DAC. Not all soundcards have a digital output, so you could replace the soundcard or use the computer’s USB output with a USB-capable DAC (such as the Alpha Design Labs GT-40) or an integrated amplifier which offers a USB input (like the Magnum Dynalab MD 309). Be sure to investigate the USB connection capabilities such as the sample/bit rate, as they tend to vary between components. A computer provides the convenience of music storage on its hard drive and allows easy playback of digital files with software such as iTunes, Songbird, Foobar2000 or Windows Media Player. Quality is limited by the type of connection, the DAC and the quality of the music file. The main drawback of using a computer or laptop for music playback is finding a place for it near the stereo – and noisy computer fans don’t help.

Media Receivers or Streamers
A more flexible option is to transmit the digital music stored on your computer or even a compatible Network Attached Storage (NAS) hard drive to your stereo system via your home network. To use this option you will need a device that connects to your stereo system and can access your home network; such devices are usually called media receivers or streamers. Media receivers connect to your network (wirelessly or via Ethernet cable) and can stream music files from your computer or NAS hard drive via a network connection. These devices are connected to your stereo via either a standard stereo RCA cable connection or via a digital cable (Toslink / SPDIF). For the digital connection, as discussed earlier, you would need a digital input on your stereo system or an external DAC. In some cases, software may need to be loaded onto your computer to use the media receiver. Three such devices are the Logitech Squeezebox Touch, the Apple TV and the Sonos Connect with Bridge. Media servers will have different features, capabilities, compatibilities and performance parameters. For instance, the Logitech Squeezebox can handle all popular file types and resolutions but will only output to a maximum resolution of 24-bit/96 kHz, while the Apple TV can’t handle FLAC formatted files and is restricted to a maximum output resolution of 16-bit/44.1 kHz. In terms of control interfaces, the Squeezebox has its own built-in touch screen but the Apple TV and the Sonos will need to be controlled with a laptop or an iPhone/iPod/iPad. In a number of cases you can use your own library software such as iTunes. There also exist some non-essential but helpful technologies and protocols that can make compatibility and connections simpler, examples being DLNA and Apple AirPlay but we won’t get into these in this article. We also need to note that some media receivers, often termed as full-function or all-in-one, may provide a number of other features such as on-board storage, CD drives for playback and ripping, internet radio tuners and in some cases integrated amplifiers like in the case of the Naim Uniti and UnitiQute.

Media Players
Media players are essentially a media receiver without the ability to connect to a network and stream digital files from remote storage devices. Media players either have integrated storage or require plug-in storage, such as a portable hard drive or USB flash memory drive. Media players have potentially less issues with data transmission and may offer more consistent and higher performance. Along with some specialized and dedicated media players, some audio-video receivers also fit into this category, where they have USB inputs that can browse the contents of a connected USB hard drive or thumb drive. A couple examples of media players are the Bryston BDP-1 digital player or the Marantz SR7005 AVR.

Is this everything there is to know about digital music playback? Hardly, but these are the key fundamentals. Hopefully, with this information you can be better equipped to explore digital music solutions further. If after reading this article, you at least thought, “…oh, there’s more to digital music than MP3…” then I’ll consider my job done. Look out for other articles on this topic as we continue to explore the digital audio realm in future issues of CANADA HiFi. In the meantime, happy listening!