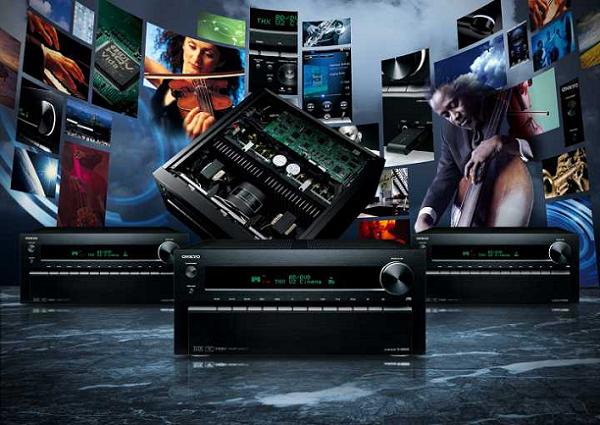 The receivers all provide for seamless integration into lifestyle systems with Ethernet for access to preloaded audio streaming channels such as Spotify, and connectivity for smart phones, tablets, and PC via DLNA or Bluetooth.

Onkyo is working with Cisco to incorporate SimpleTap, becoming the first company to integrate SimpleTap technology into CE products. Firmware updates will be available to enable all 2012 Onkyo Network enabled receivers to take advantage of this new technology.

SimpleTap simplifies how AV receivers connected to the Network, so people can instantly enjoy their favorite tunes from music streaming services such as Pandora, Spotify, SiriusXM Internet Radio and many other services.

HDMI connectivity has also been enhanced by adding Zone2 HDMI connectivity that removes the need for a secondary analog connection in order to access audio in a second zone. Powered audio is available in up to three zones simultaneously—with multi-zone playback and setting controls managed by remote app.

The receiver’s primary role, however, is always at the heart of the home theater system, as well as providing transcendent stereo playback for music. As audio and video processors, these three receivers are unrivalled in their respective categories.

Signals are then amplified through discrete Three-Stage Inverted Darlington Circuitry, with a triple transistor array that cuts distortion and boosts current flow to the speakers. This innovative amplifier design capitalizes on the unique benefits offered by a low negative feedback topology, preserving the life, vitality, and realism of the audio as it was originally recorded. Outputted through discrete transistors, the resulting sound further burnishes Onkyo’s reputation as the masters of high fidelity audio.

The flagship TX-NR5010 is aimed squarely at the avid home theater enthusiast. As part of the THX certification promise, this receiver is designed to deliver the highest audio and video quality for an unsurpassed home cinema experience right out of the box. Housed in a rigid chassis with separate anti-resonant aluminum top and side panels, the unit has a massive toroidal transformer supported by two discrete transformers for audio and video processing. With gold-plated audio terminals and speaker posts, this unit is fastidiously outfitted to audiophile-grade specifications.

A new Differential DAC Mode and Digital Crossover Processing Network are also included on all three models to optimize performance when bi-wiring and bi-amping the front channels—further demonstrating Onkyo’s commitment to audiophile-level sound.

All three models boast an exhaustive the list of A/V connections.  In addition to the capacity to link with an iPhone, iPod, or flash memory device, these models include two USB ports in the front and rear to accommodate the UWF-1 Wireless LAN Adapter and UBT-1 Bluetooth USB Adapter (sold separately).

Onkyo made these heavyweights not only the best-looking, best-finished A/V receivers on the market, but also the easiest to set up and use.  The 1080p overlaid display with Quick Set-Up function enables fast mid-program adjustment, while remote control apps for Android-powered phones and iPhone offer access to system settings, as well as playback control from anywhere in the home.

The descendents of a long line of award-winning A/V products, these three unique receivers are a triumph of imagination and engineering, and demonstrate Onkyo’s commitment to keeping pace with dynamic and evolving technology while faithfully maintaining its traditional insistence on build quality and complete audio integrity.