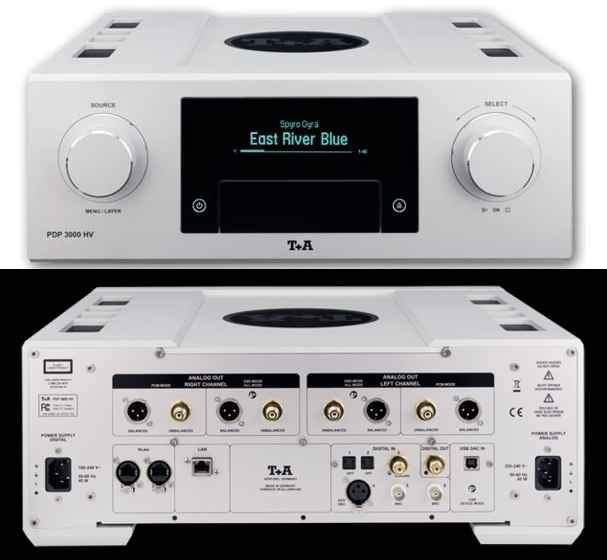 T+A Elektroakustik has just launched their latest disc player within their flagship HV “High Voltage” series – the PDP 3000.  The two-channel models in the HV series have been designed to meet the expectations of demanding audiophiles.

The amplifiers of the HV series are driven at significantly higher than conventional voltages.  This high voltage is applied to the output stages and pre-amplifier stages as well as power amplifiers, resulting in an extremely linear curve with low distortion and tremendous dynamic capabilities.

The PDP 3000 HV case takes a cost-no-object design approach – crafted out of solid aluminum with no ferromagnetic materials.  Aluminum dividers separate five perfectly shielded sub-compartments which house the disc mechanism (with decoder board and digital inputs), the D/A converter (with analogue output stage), the analogue mains power supply, the digital mains power supply and – in the solid aluminum front panel – the control section with its ultra- bright screen and sensor buttons.

The heart of the PDP 3000 HV is a quadruple double-differential digital –to-analogue converter based on the outstanding converter employed in the T+A MP 3000 HV model.  The PDP 3000 HV, the converter features a supplementary signal path for processing DSD signals. The signal passes through T+A’s innovative jitter-reduction stage, which receives the data from either the CD/SACD transport or any of the seven digital inputs before such is processed by the converter. The USB input is equipped with one of the latest USB interfaces, and is capable of reproducing PCM and DSD audio at the highest level of quality; DSD data is passed directly to the converter modules. The current/voltage transducers, which are downstream of the D/A converter, are critical to the sound quality. They are of fully discrete, channel-separate construction, and are equipped with the T+A HV technology, as are the analogue output stages.

The array of connections on the PDP 3000 back panel reflects the symmetrical construction of both the case and the overall circuit design. The analogue output stages pass their signals directly to the professional-grade XLR or RCA output sockets for PCM and DSD operation. Located below them – behind the lower compartment – are the digital input connections, the HV bus, the LAN socket and the separate sockets for the analogue and digital mains power supplies.

The PDP 3000 HV’s high-grade SACD mechanism is fully shielded and housed in a machined solid aluminum case in order to prevent any trace of interaction between the moving parts of the mechanism and the rest of the player. The transport mechanism is mounted on just two close-tolerance pushrods, which completely de-couple it from the massive outer case. This in turn prevents the transmission of external pressure waves, vibration or structural sound from the mounting surface to the electronics and disc mechanism. A high-torque synchronous motor moves the disc carrier block smoothly and quietly by means of a precision-made de-coupled spindle. The loading mechanism makes it easy to insert discs without damaging them; they are held in securely in place by an anti-resonance puck.

The T+A Elektroakustik PDP 3000 HV is crafted in Germany, and will begin shipping in the USA and Canada during October, 2014. The PDP 3000 HV will be priced at $20,000.00 U.S.  Look for more details on this and other T+A Elecktroakustic products at: http://www.taelektroakustik.de/.