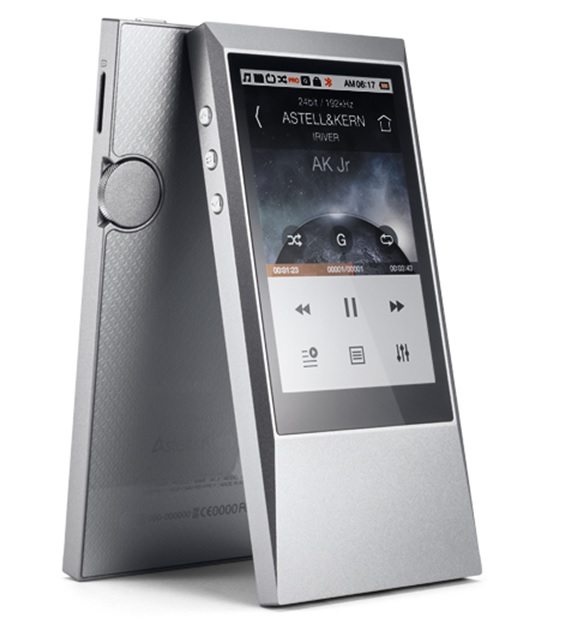 Astell&Kern, manufacturer of portable hi-end audio players has just announced their latest product – their new entry-level AK Jr. The AK Jr is an entry level portable hi-res audio player that has been developed to bring the highest quality to a more affordable level.

The Astell&Kern AK Jr features 64GB of internal memory and a microSD card slot, supporting a 64GB microSD card for a total capacity of 128GB of music storage. The AK Jr features a single Wolfson WM8740 DAC and an unbalanced 3.5mm headphone jack with an output impedance of 2 ohms, powerful enough to drive a wide range of high-end headphones and IEMs. With a 3.1” LCD touchscreen, the AK Jr provides plenty of space to display your music information.

The AK Jr supports a wide range of digital audio files, including 24-bit, up to 192khz PCM and single-rate DSD (converted to PCM) high-resolution audio, as well as the most popular Apple lossless formats in addition to many other lossy music formats users may currently have.

Astell&Kern’s current lineup of audiophile-grade portable hi-res audio players include: the AK100 II, AK120 II and the flagship AK240. These three players feature upgrades from the AK Jr including single and dual-DAC Cirrus Logic 4398 chipsets; single and double-rate DSD playback (native DSD playback on AK240, DSD to PCM conversion on the AK100 II and AK120 II); 3.31-inch high-resolution AMOLED screens; unbalanced and balanced analog outputs that allows the user to use virtually any headphone or earbud on the market and Wi-Fi connectivity to download music wirelessly to the player from a computer or network storage device and provides the ability to wirelessly stream music to the player without downloading music to the player first.

All four players include the ability to use the portable player as a USB DAC, allowing the owner to connect the player to their computer to bypass their internal sound card and get high resolution sound from their PC or Mac desktop or laptop.

The new AK Jr will be on display at High End Munich 2015 in early may and T.H.E. Show Newport in late May, 2015. The Astell&Kern AK Jr will be available shortly at a MSRP of: $499 U.S. Look for more information to become available at: http://www.astellnkern.com