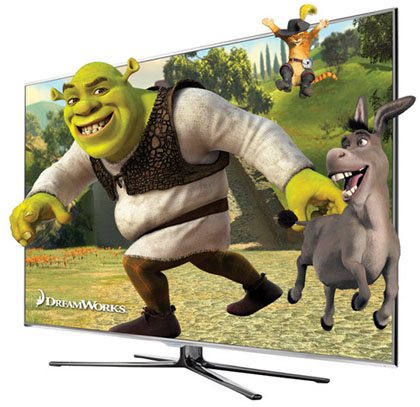 As you may have already read in the pages of CANADA HiFi, two 3D TV formats are currently available in stores – one which uses active LCD shutter glasses and the other which uses passive polarized glasses (similar to those in a movie theatre).  3D TVs with active shutter glasses were the first to hit the market last year, with this type of 3D tech now widely available in TVs from companies like Samsung, Panasonic, Sony, Toshiba and LG.  And now recently, LG introduced a line-up of LCD 3D TVs which use very inexpensive passive polarized glasses.  The only trouble with the passive polarized tech is that it cuts the vertical resolution by 50 percent, compared to active shutter systems.

Nevertheless, LG has began strongly promoting its 3D TVs with the passive glasses in a campaign of TV commercials (at least in the US).  And Samsung quickly responded by significantly reducing the pricing on its active shutter glasses and by offering special packages to new 3D TV buyers.  Again, all of this is taking place in the US, but it will surely follow very quickly here in Canada as well.

This is an excerpt from an article posted on www.hdguru.com:

The free 3D Starter Kit offer begins on April 23rd. It’s an “either/or” deal, meaning consumers that get the free “Starter Kit” are ineligible for the other “free two pair of glasses” offer.

With either deal and the price drop, a family of four can now get four pairs of active glasses for under $100 retail, down from $599.96.

Samsung also announced it will reduce the price of its wrap-around rechargeable 3D glasses, which are currently $199.99. The new price will be announced soon.