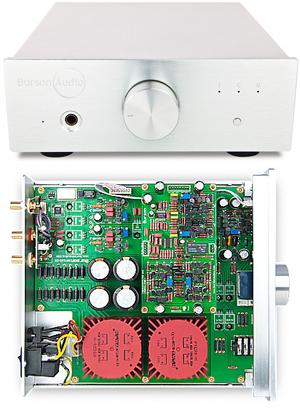 Burson Audio, an audio product company based out of Australia, has just recently announced their latest DAC / headphone amplifier product – the HA-160DS. The new DAC with headphone amplifier combo is 16% smaller in footprint and 35% lighter in weight than their former HA-160D model. In addition, the new HA-160DS is also less expensive.

The DAC within the new HA-160DS is identical in every way to the former HA-160D; however, the USB supports only 24-bit/96kHz but the RCA input does support the normal higher rate of 24-bit/192kHz. The headphone amplification is also identical to the former model, utilizing a volume potentiometer by Alps, though the new DS does not provide a preamp function, as the former D did. There are two power transformers for increased power stability and reduced interference.

Inputs include USB, S/PDIF via RCA and stereo analog via RCA. The analog amplification is Class A, promising smoother sound. The Burson Audio HA-160DS comes housed in 4mm aluminum casework, which is engineered to act as a full heat-sink, as well.

The Burson Audio HA-160DS will be shipping worldwide on November 1 at a MSRP of $890 U.S. Look for more details on the HA-160DS at: www.bursonaudio.com.