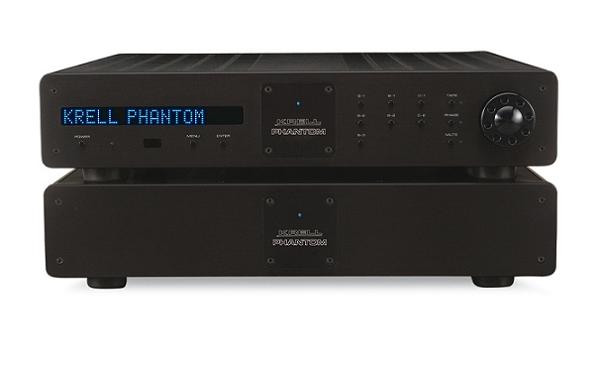 Krell has just announced that their first production run of Phantom and Phantom II preamplifiers has begun this week. The Phantom preamps replace the Evolution 202 / 222 preamps, utilizing a similar chassis but with different internals. The Phantom preamp can be ordered with an optional crossover, which is a first for Krell. The crossover permits performance to be maximized in subwoofer/satellite speaker arrangements. The compact size of the Phantom preamps allows for use in limited space configurations. The Phantom preamps have been designed to complement the Krell Ceipher SACD/CD player and Evolution e Series amplifiers.

Owing to Krell’s work in the Modulari Duo Reference loudspeaker, the unique crossover feature is a highly sophisticated option. When the optional board is present, additional crossover menu items become available. Definable parameters include independently assignable crossover frequencies and filter types for the high and low pass sections. Choices include 40Hz, 55Hz, 75Hz, and 100Hz crossover points with 12dB, 24dB, and 48dB Butterworth or 24dB Linkwitz-Riley style filters. A major advantage to using the crossover section is the high pass section uses the full Phantom preamplifier circuitry for its output stage.

The Phantom and Phantom II preamplifiers are dual monaural circuit designs with the left and right channels afforded their own power supply regulation and individual full chassis sized boards. All signal gain is realized in surface mount topology using proprietary multiple-output current mirrors with nearly 500 times the open loop linearity of other designs 1.5 MHz open loop bandwidth in a zero feedback, balanced, Krell Current Mode design terminating in Krell CAST. A complete Krell system (source, preamp, and amplifier) system, Krell Phantom II connected using CAST interconnects reduces the number of voltage gain stages to the minimum, one. The resulting noise floor approaches the theoretical limit of technology. Negative feedback is not used anywhere in the preamp, nor is it necessary. Open-loop distortion is typically less than 0.003%. The volume control is realized with a balanced resistor ladder — bandwidth and transient response of the preamp circuitry are virtually unaffected by the volume setting.

The Phantom and Phantom II audio circuits receive power from a Krell Current Mode analog power supply housed in its own dedicated chassis. The power supply avoids the common integrated circuit topology used in many preamplifiers and instead mimics the design topology of Krell Evolution e Series amplifiers. The circuitry is completely discrete giving it the ability to respond quickly to current demands and also be unaffected by all but the most severe AC voltage power fluctuations. Located in its own chassis, for maximum isolation from electrical and magnetic interference, the Phantom preamplifier power supply features a 290 VA transformer and 41,600µF of capacitance. While located in the same chassis, the Phantom II power supply is oversized with a 140 VA transformer and 35,000µF of capacitance.

The Phantom and Phantom II preamps can be ordered through authorized dealers and carry the following MSRPs:

More information to be found at: http://www.krellonline.com