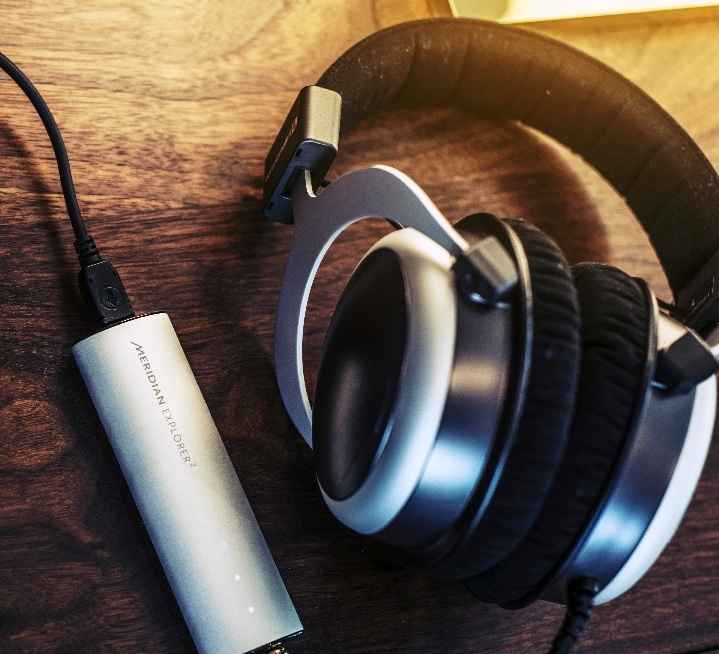 The new Meridian Explorer2 was designed, and is built, in the UK, with the same attention to quality and detail as all Meridian products.  Meridian’s Explorer2 is a portable, compact and rugged USB DAC that has been designed to provide best-in-class sound.  The new Explorer2 features significantly more powerful DSP capability than its predecessor, which allows for the full range of Meridian enhancement technologies to be incorporated.

The Explorer2 uses premium audiophile-grade components throughout, a 6-layer circuit board, an elegant all-metal enclosure and provides an exceptional Meridian audio experience from virtually any computer.

Along with the sophisticated 6-layer circuit board, and audiophile-grade components that include: resistors, sockets and music grade electrolytics; and polypropylene filter capacitors, the Explorer2 has direct-coupled outputs to maximize audio quality.

Explorer2 includes significantly more DSP power than its predecessor, allowing Meridian to incorporate upsampling of input signals to 176.4/192kHz (4x standard sample rates) and includes Meridian’s proprietary Apodising filter that minimizes pre-ringing for a clearer, more transparent sound, while at the same time removing digital filter artefacts from earlier digital recordings for sound that is in this case better than the original digital master.  The Explorer2 also features Meridian’s approach to noise-shaping, which moves noise out of the audio band, increasing the audible signal to noise ratio.

Explorer2 features full audio performance at sample rates up to 192kHz, 24-bit resolution. Explorer2 is completely asynchronous, using precision on-board low-jitter crystal oscillators for the base sample rates, developed from those used in Meridian’s premium home entertainment systems.  These oscillators provide the master clocking for the entire playback system, and eliminate all USB interface jitter. ‘Isochronous’ transfer ensures maximum bandwidth and low latency, the latter being significant when playing videos on the computer, for which audio and video must be in sync.  The DAC design also offers extremely low modulation noise and distortion for the ultimate in audio performance. The interface is USB Audio Class Compliant 2.0 HS, supporting data rates up to 480Mb/s.

Two outputs are provided. A 3.5mm headphone socket delivers up to 130mW of high-quality audio – capable of driving plenty of level for even low-efficiency headphones.  The volume is controlled from the host computer, and is an advanced design with an extended range of 0 to –100dB. This level of variability suits all kinds of headphones including the most sensitive types.  A second 3.5mm socket provides a fixed-level analogue (2v RMS) output for connection to an external audio system, connected directly to the DAC for bit-precise performance. This output delivers a fixed, full-level signal with no volume control – essential for an audio system, where you need to ensure maximum signal to noise ratio and maximum use of digital resolution right through to the audio system’s own volume control, which controls the level for all sources in the system.  Explorer2 automatically senses which output is in use and deactivates the heaphone amplifier when the line output is connected, reducing noise.

Explorer2 is a USB Class 2 device that works with the newer (2009) USB2 specification. This supports a transmission speed of 480Mb/s – 40 times faster than Class 1 – allowing Explorer2 to play 192kHz audio streams, and be tolerant of where it is connected, removing the need for direct or solitary connection to the PC.
Whether playing back an mp3 or a high-resolution lossless file, Explorer2 will make any content sound its best, delivering a level of audio quality essentially limited only by the source material.  Three indicators show the status of the Explorer2. The LED furthest from the headphone socket illuminates white to indicate that the unit is operating (and playing PCM at 1x standard sample rates – 44.1/48kHz). The middle LED (2x standard rate) indicates 88.2/96kHz operation and the third LED 176.4/192kHz operation (4x).

Explorer2 connects to the computer via USB mini B connector and a cable – it does not plug directly into the PC like many other products. The use of a cable (included) instead of plugging direct into the PC minimizes the risk of damaging the PC motherboard if the product is accidentally knocked or the headphone cord is pulled.
Explorer2 connects to virtually any computer with a USB port. Drivers are provided for Windows; Macintosh and Linux operating systems allow simple plug-in and play operation. On the Macintosh, the Audio MIDI Setup utility is used to set the output sample rate; on Windows, the Sound control panel is used. Explorer2 requires Macintosh OS X 10.6.4 (Snow Leopard) or later, Linux kernel 2.6.37 or later, or Windows XP SP3, Windows 7 SP1, or Windows 8 or later.  Despite its powerful output and performance capability, Explorer2 is entirely USB bus powered. It is supplied in elegant presentation packaging and includes a short USB cable (longer cables may also be used) and a soft carrying pouch that stores both Explorer2 and cable.

The new Meridian Explorer2 is now available at a MSRP of: $299 U.S.  Look for more information to be provided at: https://www.meridian-audio.com/.