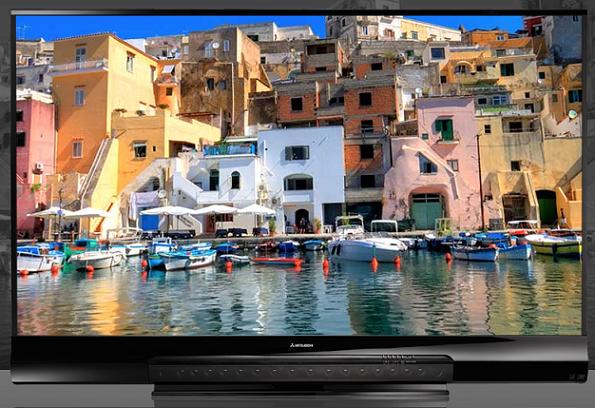 Mitsubishi DLP Home Cinema TVs are powered by DLP technology, which also powered most of the digital cinemas in theaters all over the world. DLP Mirrors switch faster than other display technologies for a smoother picture with less blur. The 92-inch class DLP Home Cinema TV offers four times the viewing area of a 46-inch class.

Mitsubishi will also introduce in its 2012 product line a new 75-inch class LaserVue television model, the L75-A96, the latest television in Mitsubishi’s laser TV line. The only consumer laser TV on the market, the LaserVue offers stunning Cinema Color in HD and 3D and is powered by Mitsubishi’s exclusive laser light engine. The L75-A96 is a highly energy efficient television, operating at less than 85 watts, below the 2012 Energy Star 5.3 requirement of 108 watts.

StreamTV movies and apps from Mitsubishi, available on the 742 and 842 Series, provide instant access to an extensive library of high-quality online entertainment and social media content. StreamTV, powered by VUDU TM, streams movies in HDX. The Internet-connected platform offers HD movies and television titles, 3D streaming, and over 100 different streaming applications, including Facebook, Twitter, Flickr, and the New York Times.

As part of the 2012 product line, Mitsubishi has added enhancements to its 3D TV capabilities in the 842 Series. A new built-in Bluetooth RF transmitter, which uses new “Full HD 3D Glasses” TM format, provides a seamless and vivid 3D experience and increases the number of models and brands of 3D glasses that can be used with the TV.

This year the 742 Series adds its own 92-inch class model, which includes a Clear Contrast Screen that mitigates ambient light through a specially formulated screen material to deliver deep blacks, bright whites, and a wide range of colors in between.

Mitsubishi is debuting two new high value big screens at 82-inch class in the 642 Series and the C12 Series. The C12 Series is the most cost-efficient DLP Home Cinema TV in the line, offering consumers a large screen at an unbeatable price—perfect for consumers who want the biggest bang for their buck. The 642 Series also adds an 82-inch class model, providing an immersive HD and 3D experience at a great value.

For additional information on these products, please visit: www.MEVSA.com or www.Mitsubishi-tv.com.