OLED TV Shipment Predictions for 2012 and Beyond 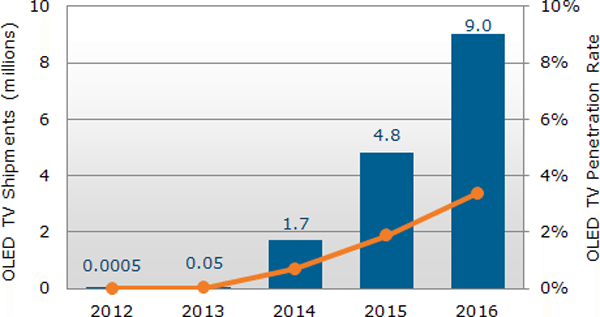 Despite high expectations set by manufacturers Samsung and LG Electronics for the entry of OLED (organic light emitting diode) displays into the TV market in 2012, these sets will likely only be available in small volumes by the end of this year.

With 55″ OLED TV demonstrations stealing the show at CES in January 2012, commercial products were expected in time for the Olympics in August. But as the year progressed, the possibility of commercialization in 2012 was called into question, due to mass production challenges and expected high retail prices. In September, OLED TVs were once again demonstrated at IFA in Berlin, and even at some local retailers, but were still not commercially available.

According to the NPD DisplaySearch Quarterly Global TV Shipment and Forecast Report, OLED TV panel makers and set manufacturers are still targeting commercialization this year. The report disclosed that at least 500 OLED TVs will ship in 2012. While this is a very small quantity in comparison to the total TV market, the start of shipments will be an important breakthrough.

It is important for OLED manufacturers to make a statement as the LCD TV market shifts to larger screen sizes and higher resolutions. According to David Hsieh, NPD Display Search Vice President, “If we do see OLED TVs hit the market within 2012, the shipments will be used primarily for retail demonstrations in developed regions like North America and Europe.” Hsieh added, “4K × 2K LCD TVs have has become a focus and are currently available, and OLED TV needs to demonstrate its technical superiority.”

NPD DisplaySearch forecasts that OLED TV panel production will remain low, as LG and Samsung continue their efforts to increase production yields. Following in the footsteps of Korean panel manufacturers, Taiwan, China and Japan will support/begin AMOLED TV panel production in 2014, and NPD DisplaySearch forecasts that OLED TV shipments will pass one million units. By 2016, OLED penetration of the TV market is forecast to exceed 3%.