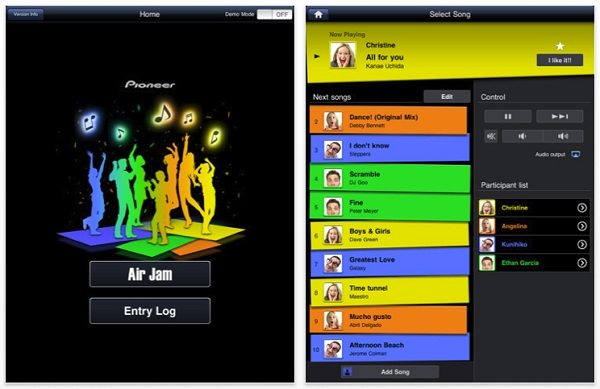 Apple’s devices like the iPhone, iPad and iPod touch are quickly becoming one of our favourite ways to control AV components.  And companies like Pioneer are leading the pack with innovative apps for its latest AV receivers.

Earlier this week Pioneer announced Air Jam and iControlAV2, two new apps that turn iPhone, iPad, or iPod touch running iOS 4.2 into sources for entertainment and control of its new top line VSX-1021 audio video receiver. Pioneer’s new Air Jam App is a unique app that allows users to share their favorite music tracks directly through the receiver. The Air Jam1 App can simultaneously connect up to four devices to the receiver via Bluetooth, giving users the ability to create a group playlist with

An excellent solution for any house party, the new Air Jam App turns a iPhone, iPad, or iPod touch into a song server at the touch of a button. By downloading the free app from the App Store and launching it on a iPhone, iPad, or iPod touch, users can cue songs from their music library for playback over Bluetooth on the Pioneer receiver with the simplicity of drag and drop. Once Air Jam is launched, each device will display the list of songs and artists added by all connected users and the device from which each song will play. During the session, each user can shuffle, select, and control the playlist. Following the session, users can recall past playlists and purchase songs from the iTunes Store with a simple touch of the screen. www.iTunes.ca.

Pioneer’s iControlAV2 App enables VSX-1021 owners to put away the included remote control and utilize an iPhone, iPad, or iPod touch as their main home theater controller, enabling direct control of the receiver’s volume, bass, balance and room settings. The app is further enhanced when used on an iPad, with most major functions combined into a single, intuitive screen. Additional features include detailed graphic representations of before and after MCACC room calibration, and sound adjustments that enable users to create their own equalizer settings with a simple “touch and draw” on the screen. The iControlAV2 App also includes Blu-ray player control when connected to a compatible Pioneer Blu-ray player. Both the Air Jam App and the iControlAV2 App require iOS 4.2 with iPhone 4, iPhone 3GS and

The Pioneer VSX-1021 Audio Video receiver is available at a suggested retail price of $699.