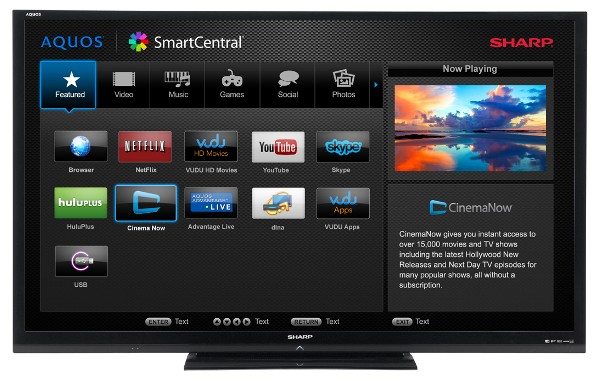 At the 2012 CES, Sharp introduced nearly 20 new TV models with screen sizes of 60-inches and up, many featuring 3D in 120Hz or 240Hz panel options.  The AQUOS Quattron models will feature the new Quad Pixel Plus II technology.   Now the new models are about to start hitting the store shelves.

Sharp is introducing Quad Pixel Plus II, the latest innovation for its exclusive Quattron technology. This new feature is available on the 60-inch (60 1/32” diagonal) and 70-inch (69 ½” diagonal) Sharp AQUOS Quattron 8 and 9 series LED TVs, offering even greater detail, smoother lines and colour transitions. Sharp is improving picture quality even more in the 9 Series with the introduction of full array LED backlighting with local dimming, which provides deep black levels and an optimal contrast ratio, while reducing energy consumption. Local Dimming allows specific groups of LEDs to be dimmed for greater control of brightness and darkness in different areas of the screen for outstanding black levels.

AQUOS connected TV owners have access to AQUOS Advantage LIVE, Sharp’s unique, complimentary customer support program. AQUOS Advantage Live allows trained advisors to remotely connect via the Internet to AQUOS TVs to assist with setup, troubleshooting and picture optimization. And with LIVE answer, Sharp’s experts are available to customers through a dedicated line, 1-877-AQUOS09, providing instantaneous, remote access to representatives. SmartCentral will be integrated in most of Sharp’s new 2012 LED TVs, including the 6, 7, 8 and 9 Series.

The TV is the entertainment hub of the home with consumers demanding the ability to easily access more types of content directly from their TV. Sharp is answering this demand with SmartCentral, a newly designed easy to use, intuitive and customizable user interface. Select models give consumers the ability to search for content, browse the Web and access many of the most popular applications, including Netflix, Facebook and YouTube among others. Users can customize their experience with personalized settings, including selecting favorite apps, and choosing from multiple wallpapers and with select models, two viewing formats – full screen or dock.

Another smart feature is Sharp AQUOS Beamzit, a free media-sharing app that allows users to wirelessly send photos, music and video to a Sharp AQUOS Wi-Fi enabled television from their IOS or Android smart phone or tablet.

The 9 Series features Sharp’s new SmartCentral and built-in WiFi. With five HDMI inputs, consumers will be able to connect a variety of devices – including computers, to Blu-ray Disc players, DVRs, camcorders, sound bar systems and video game consoles – directly to their TV.

Like the 9 Series, the 8 series offers full HD 1080p with built-in WiFi and SmartCentral. The 8 Series includes four HDMI inputs.