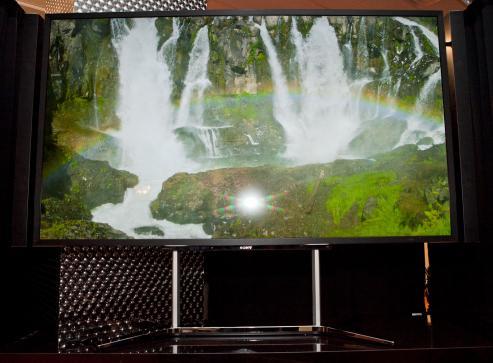 Incorporating proprietary upscaling technology including the 4K X-Reality PRO picture engine, the new TV is designed to ensure that every frame looks clear and crisp, with 4K resolution regardless of the source – Blu-ray disc, TV broadcasts or web videos. Viewers can now watch video on the large screen of this XBR TV and not see any degradation of image quality traditionally associated larger screen sizes. High-resolution processing powers a 3D viewing experience that exceeds Full HD resolution. The accompanying 3D glasses use a light and comfortable, passive design, allowing viewers to enjoy 3D footage on a large screen, like a movie theatre.

The Sony’s XBR-84X900 4K TV incorporates a 10 Unit Live Speaker system, which is optimized for this large-sized screen. Drawing on Sony’s storied sound signal-processing technology, these speakers envelop the viewer in virtual 5.1 surround sound. The side speakers are also detachable, allowing consumers to connect to an existing home theatre system.

The XBR-84X900 4K TV not only delivers a great viewing experience; it also offers consumers a new way to enjoy digital photographs. By simply connecting a digital camera, digital photos can be displayed on the large screen at 4K resolution, allowing viewers to browse scenic pictures that are reminiscent of colorful, large posters, or enable viewing of life-sized pictures of their family and friends. PlayStation3 software such as PlayMemories Studio can be used to easily manage and playback photographs at 4K resolution.

The XBR 4K TV also has full network connectivity, allowing consumers control of their viewing experience via a tablet or smartphone with the downloadable Media Remote App. With built-in WiFi they can access movies, TV shows, and online video and music through the Sony Entertainment Network suite of services including Music Unlimited, Video Unlimited, Netflix, Pandora, Yahoo! Broadcast Interactivity and more than 50 other popular internet entertainment providers.

Sony leads the way in all aspects of the 4K workflow, from both the professional and consumer perspective. More than 12,500 of the company’s 4K digital cinema projectors are in use at movie theatres throughout the world, and Sony is also leading the way in true 4K content creation with its flagship F65 CineAlta 4K camera. With several 4K movies in production, the first broadcast TV shows beginning to shoot in 4K.  Part of Sony’s 4K line-up in the home is the VPL-VW1000ES, the first 4K home theatre projector, which was announced last year and is available through custom installers.

The new XBR 4KTV will arrive in Sony Stores and select retail locations in North America later this year.  Prices and exact date of availability are yet to be announced.  Look for more details at: www.sony.com.