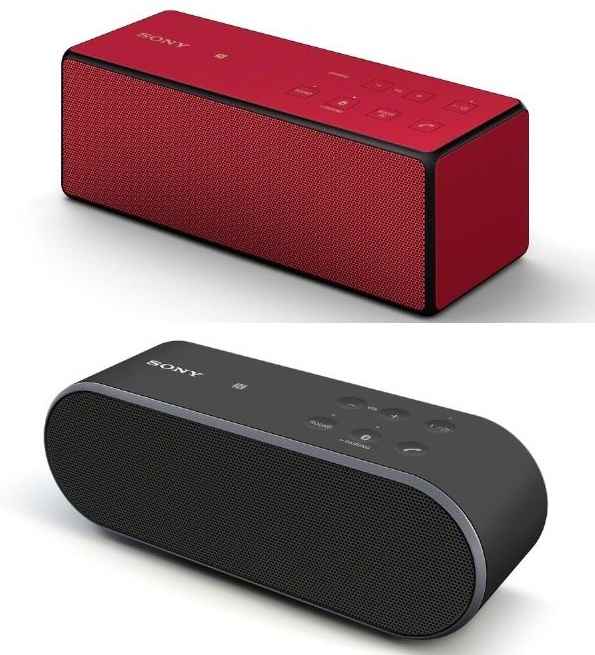 The compact SRS-X3 provides 20 watts output from a sleek “Definitive Outline” design.  The geometric “Definitive Outline” is characterized by sleek lines and smooth surfaces to complement any decor.  The SRS-X3 incorporates two full range speakers plustwo passive radiators to provide greater bass than its size would suggest.  ClearAudio+, a unique Sony digital signal processing technology, is also intergrated to provide a higher quality sound.  Sony also provides Sound Mode to deliver a wider sound stage.  One-Touch listening by connection to mobile devices via NFC is one of the features, along iwth Bluetooth streaming.  As well, the SRS-X3 has a built-in mic and can be used as a speakerphone when paired with a mobile phone. The built-in rechargeable battery provides up to 7 hours of playback. .

The SRS-X2 is a smaller design having the same output power of 20 watts.  It also incorporates One-touch listening via NFC-enabled devices and can stream via Bluetooth. Speakerphone functionality when paired with a mobile phone is provided and the built-in rechargeable battery offers up to 5 hours of playback.

Both the SRS-X3 and SRS-X2 portable wireless speakers come in a choice of black, white and red and both include a USB AC adapter/charger.  The SRS-X3 retails for $149.99 U.S. and the SRS-X2 retails for $99.99 U.S. Both models are expected to be available in June.  Look for more details at: www.sony.com.