This article is a continuation of the Toronto Audio Video Entertainment Show 2011 – Highlights by George de Sa.

The previous part of this article can be found by clicking HERE https://novo.press/index.php/taves-2011-coverage-%e2%80%93-part-2/ 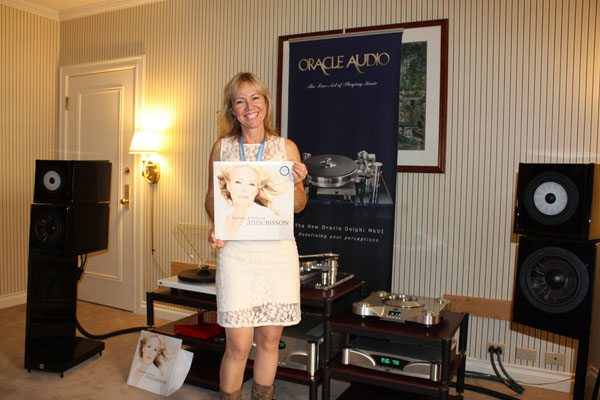 Next I took the elevator up to the sixth floor to see what else was left to discover at TAVES.  One room was jointly hosted by Kimbercan and Oracle Audio Technologies.  Kimbercan was featuring a wide range of Kimber Kable products from the affordable PBJ interconnects right up to their Kimber Select models but it was the Oracle Audio setup, using Kimber Kable interconnects and speaker cables that was drawing the most attention in the room.  The Oracle featured setup was built around a twin turntable / CD source, allowing for switches between vinyl and CD media.  There was the Oracle Paris turntable ($3,150) with Paris tonearm ($950) and high-output Paris cartridge ($1,150) and then a much more expensive Oracle Delphi Mk VI turntable ($9,000) with Oracle SME 345 arm ($2,950) paired with a high-output MC Oracle Thalia cartridge ($1,950).  The turntables were connected to a Paris phono stage ($1,750) feeding into an Oracle SI 1000 integrated amplifier ($9,500), which was connected to lovely looking and sounding Vienna Acoustics The Kiss loudspeakers ($16,000/pair).  The competing digital source was the CD 1000 MkII transport ($8,000) through a new prototype DAC 1000 Mk II ($9,500).  I was told that the DAC 1000 Mk II is a completely rebuilt component with a new power supply, fully discrete analogue output boards and utilizes a state-of-the-art AKM chip.  What was very nice to see was that Oracle Audio was centre staging and supporting an up-and-coming Canadian vocal artist, Anne Bisson, with her new album Portraits & Perfumes, which was conveniently available on both 180g vinyl ($25) and CD ($15) in the room.  Anne’s voice was very sweet to hear on the Oracle Audio rig.  My personal preference was for the sound of the vinyl source, as it just came across as slightly more relaxed and open.  I could have easily spent a couple hours there but had to move on. 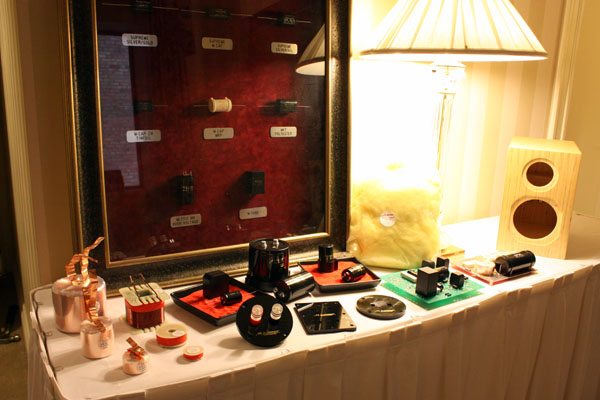 I made a short stop in the AuDIYo room, which featured a number of do-it-yourself (DIY) parts, products and kits for the avid DIYer.  A very interesting speaker, utilizing a Focal tweeter and a Danish mid-low driver, paired with a tube amplifier kit was also featured in this room.  The kit was so new that it didn’t yet have a price or product name that I could get.  Kits are to be made available for different skill levels, coming in parts, semi-assembled and fully assembled.  An Alpha Design Labs GT40 USB pre-amp / DAC (built by Furutech, $495) was serving the source files to the amplifier. 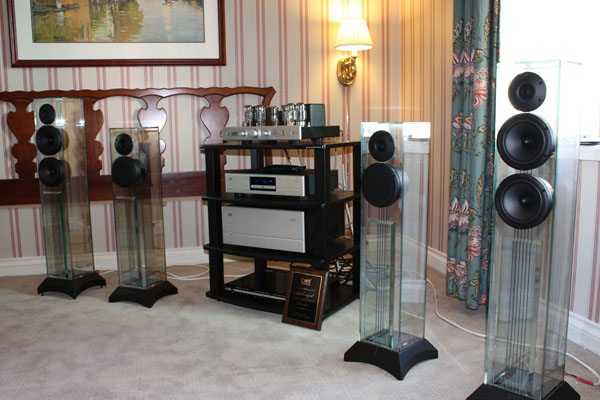 In the D2MK Solutions room I found some very unique speakers from Waterfall Audio.  These speaker enclosures were entirely made of transparent glass, showing all the internals, yet having a very refined, elegant and modern look.  What’s more important is that they actually sounded very nice and are reasonably priced.  The highlighted system used the Waterfall Victoria speakers ($6,000) with a Cary SLI 80 integrated tube amp ($3,500) fed by a Cary CD500 disc player ($3,000).  Also in the room were a number of other models in the Waterfall line such as the Iguascu ($4,500/pair), Elora LCR ($3,000/pair), Hurricanes ($1,500/pair) and the Tario ($500/pair). 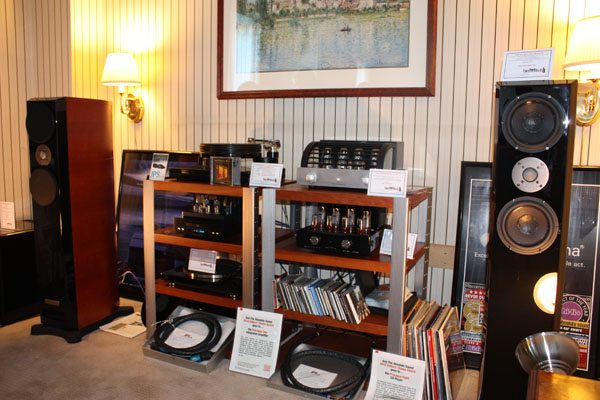 Audioscape had a relatively small room but boy was it filled with lots of product – from speakers and tube amps to turntables and cables.  Featured were the Usher Mini Dancer Two, DMD Diamond ($6,000, $4,995 show special) speakers powered by a PrimaLuna Dialogue Two integrated tube amp ($3,599, $2,995 show special) which was fed by a PrimaLuna ProLogue Eight CDP.  The sound was sweet, liquid and warm.  A new product from PrimaLuna, the ProLogue One integrated tube amplifier was on display with its casing open, exposing its internals.  There were a number of turntables from Dual ranging in price from around $300 up to just under $900, as well as a Nottingham Analogue Studio ACE Spacedeck turntable ($2,999) with a 9-inch arm ($1,799), priced in combination at the show for $3,895.  JPS Cables and products from Mystère Audio were also on display here. 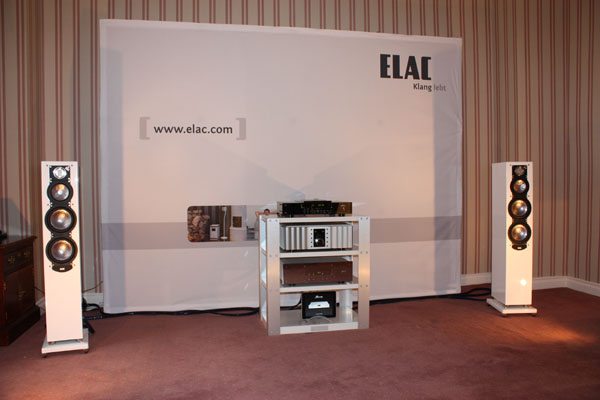 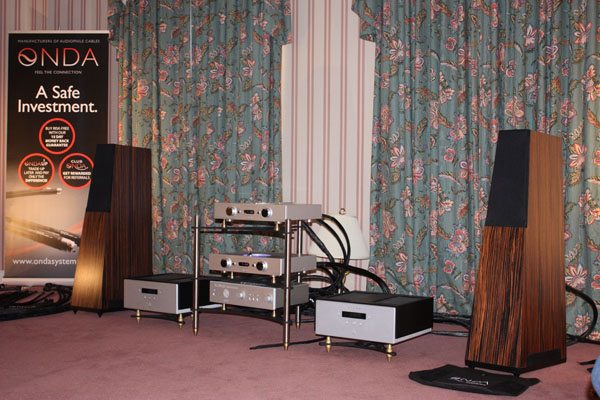 Onda Systems, an audio cable manufacturer out of Calgary, Alberta was explaining and demonstrating its various interconnect and speaker cable products at TAVES.  What’s interesting about these cables is that they are very thick and heavy and constructed of 100 percent 24 ounce silver – perhaps as close as you can get to real “audio jewellery”.  Onda cables are priced from $699 to $5,999 depending on the model and length. Something that makes the company stand out from the crowd is that it offers both a 15 day money-back trial, as well as a trade-up program.  The system in this room was made up of an Acoutic Art CD player, ModWright 36.5 preamplifier, Atlas monoblocks tube amplifiers and Vandersteen Quatro loudspeakers.  Total system price was approximately $50,000 and I found it both beautiful as well as lively and powerful sounding. 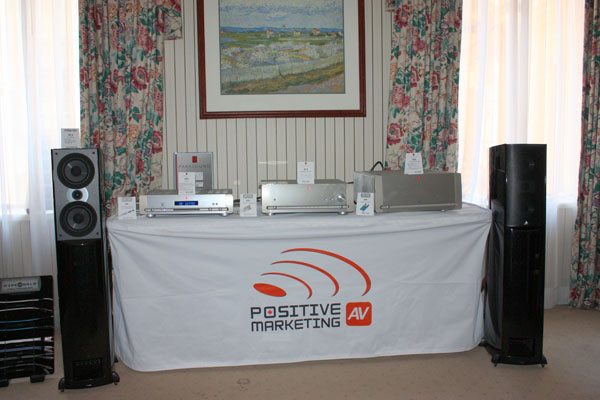 Positive Marketing AV, the distributor for Parasound, Atlantic Technology and Wireworld gave a demonstration that surprised me.  Using a pair of Atlantic Technology AT-1 speakers ($1,529/each) paired with a Parasound Halo CD1 ($4,999), JC2 preamplifier ($4,529) and A21 amplifier ($2,599) connected with Wireworld cables, the system came across as surprising powerful and tight.  What was surprising is that each speaker utilizes a pair of relatively small (5.25 inch) drivers but yet can reach down to 29 Hz and get your heart literally pounding.  The speakers utilize a proprietary design/construction technique called H-PAS, which allows them to perform much beyond their modest size. 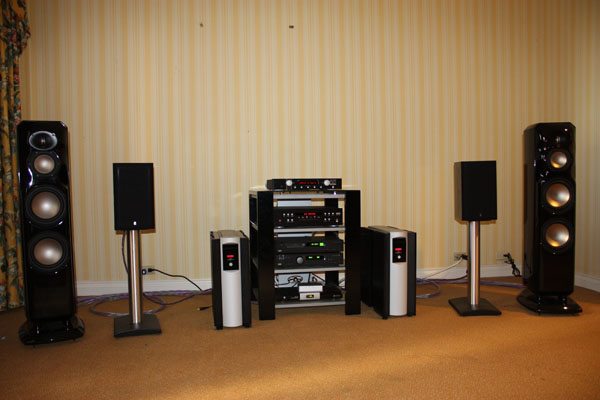 Star Electronics offered two adjoining rooms at TAVES, each with a very different setups.  The first room featured both a value focused setup and an opulent setup.  The budget system (approximately $5,000) included an Arcam A28 integrated amp, Arcam rDAC and Revel M22 bookshelf speakers.  The other system (approximately $110,000) was comprised of Mark Levinson No. 53 monoblocks, No.326 preamplifier and No.512 CDP, flowing out to Revel Studio 2 floorstanders.  The systems both performed very well with the budget system sounding very good and the opulent system sounding excellent.  Was the opulent system worth 22 times more?  Well, that’s a question of priorities and means.  All I can say is that with the budget system many would be quite pleased, to say the least.  In the adjoining room was an all-McIntosh solid state system, comprised of a MC452 power amplifier ($8,000); C50 preamplifier ($7,000); MCD500 SACD player ($8,000); MEN 220 room correction ($4,500) and XR200 loudspeakers ($20,000) totalling around $50,000 for the system.  The sound was smooth, full and substantial.  I can understand how McIntosh has garnered such a loyal following; their trademark sound can be addictive. 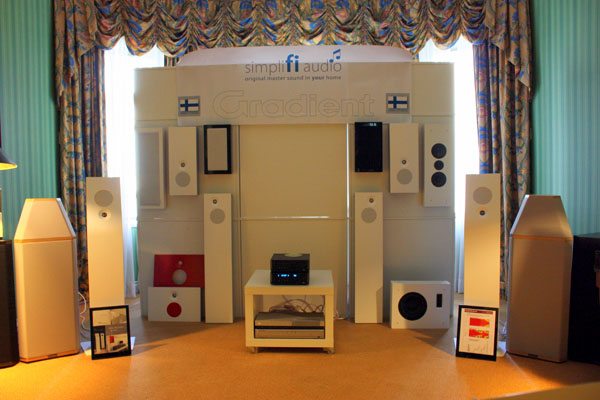 Simplifi Audio had an interesting combination of imported on-wall and floorstanding speaker products, a number of these being active designs.  Of these brands/models, two were making their North American debut.  These were products from Klangwerk and PSI Audio, both from Switzerland and all fully active powered loudspeaker designs.  The Klangwerk Phil ($6,000) and Ella ($15,000) as well as the PSI Audio A215-M ($7,500) offered a simple audio solution, avoiding the need to match an amplifier with the speakers.  Also shown in this room was DSPeaker from Finland with products starting at $399 for a pair of speakers and DLS Flatbox on-wall speakers from Sweden, ranging from $349 to $499 each.  A Gradient One Box Revolution Active System ($11,995) pairing two speakers with an active crossover/amplifier was on sale for $9,995 at the show.  The source was a modest DNM CD/preamplifier ($3,500) and cables were all from DNM, as well.  The Gradient system sounded very large and open and the Klangwerk speakers were precise and impactful. 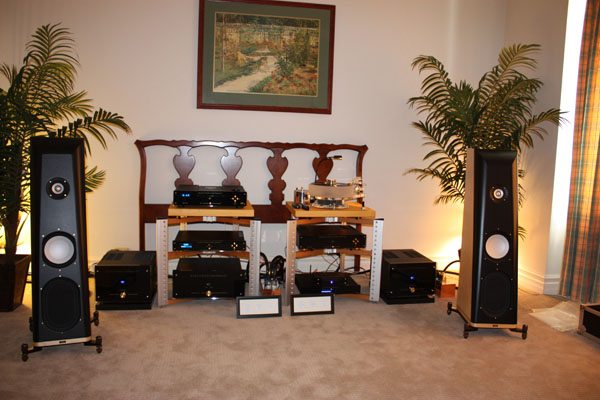 Ovation Audio was featuring Electrocompaniet electronics with Thiel speakers and a Scheu turntable.  The system in the room included Thiel CS2.4 speakers ($5,900) with outrigger ($600), Electrocompaniet ASW400 monoblocks ($12,500), PD DAC ($2,990), ECP-1 phono stage ($1,490) and EC 4.7 preamplifier ($5,900).  There was also a Scheu Premier Mk2 turntable with Cantus cartridge.  Ovation’s special for the show was 20 percent off Thiel products, extending up to Oct. 8.  The system was revealing yet very natural sounding. 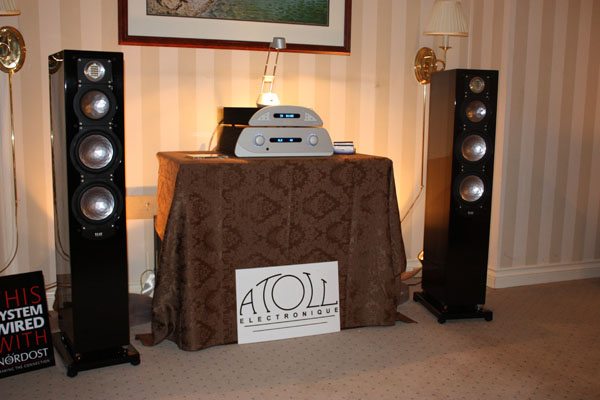 On my way down a hall of the King Eddy, I headed down to what sounded like Patricia Barber playing live in a room.  Being a Barber fan, I went to investigate and came upon the Atoll Electronique room.  Atoll is a brand based out of France and totally new to me.  Mario Gagnon, representing Atoll Electronique Canada, spent a few minutes telling me about the products.  There were two systems in this room, both paired with Elac speakers.  The more expensive was the Atoll CD400 ($6,799) with an IN400 integrated amplifier ($6,299) paired with Elac 249 floorstanders.  The lower cost system was the CD30 ($899) paired with the IN30 integrated ($799), powering Elac 247 speakers.   Listening to the more expensive system, I enjoyed the accurateness and tonality.

So, there you have it, a bit of what I saw and enjoyed at TAVES.  I can say that I saw and appreciated most of the systems in play.  Of those, many were clearly out of my reach but others have got me thinking about my next purchase.  I also had the opportunity to meet many with the same enthusiasm and love for all things audio and get some exercise, all at the same time.  I’m already looking to next year with great anticipation; let’s hope you feel likewise.