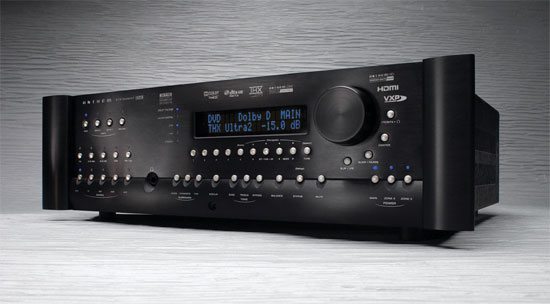 Anthem has just announced a major upgrade to its award-winning Anthem Statement D2v and Anthem AVM 50v processors. Owners of these high performance A/V processors will now be able to switch between 3D sources on HDMI inputs one through four and HDMI output one, or enable automatic passthrough as a per-source menu option for video output configuration.

A physical upgrade for existing owners of the two Anthem preamplifier/processors will also be available via a new dealer-installed circuit board which replaces two smaller boards for HDMI inputs one through four and HDMI output one, followed by a software update. Complementing the 3D switching and automatic passthrough features, the upgrade equips the Statement D2v and Anthem AVM 50V with video processor bypass for 2D, useful for reference quality video content that doesn’t require cleanup or scaling. The on-screen status display information does not apply in “Through” mode, since video processing is bypassed.

For additional convenience, the upgraded processors automatically match the output refresh rate to the source’s frame refresh rate which is useful for sources that output a mix between 24, 50, and 60 Hz.

In developing the upgrades, Anthem also put both A/V processors through rigorous compliance testing to achieve HDMI 1.4a certification. As a pioneer in the troubleshooting and integration of HDMI, Anthem understands how to utilize these connections to their fullest. The processors are equipped with four additional HDMI 1.3c inputs (for a total of eight) and one additional HDMI 1.3c output (for a total of two), delivering unprecedented connection capabilities for a preamplifier/processor. All inputs and outputs offer Deep-Color support (36-bit).

Anthem’s heralded Room Correction System (ARC-1) also comes standard with the Statement D2v 3D and AVM 50v 3D. While equalizing frequency response in a room to achieve some generic (i.e. “flat”) response is a common approach to solving problems with room acoustics, it results in an unnatural-sounding spectral balance since it does not account for in-room cues that the human ear/brain mechanism expects. ARC is a true audiophile solution: it differs from other systems in that it uses proprietary processing to compute each speaker’s in-room frequency response and then computes a target frequency response for each to yield the most natural sound as determined by multiple double-blind listening tests spanning many years.