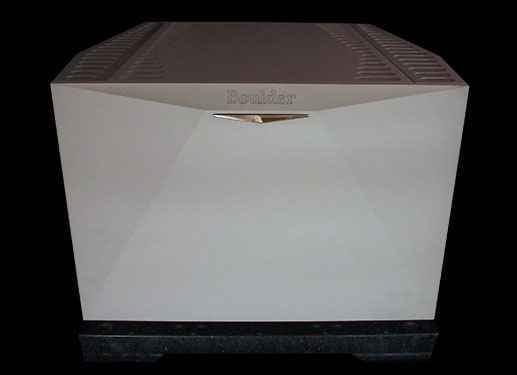 At nearly 450 pounds and producing 900 WPC, the 3060 Class A Stereo Amplifier is by far the largest and most powerful stereo amplifier ever released by Boulder.  All audio circuitry within the 3060 is linear Class A, primarily derived from Boulder’s 3050 Mono Amplifier. Bias current is actively monitored and adjusted in order to increase efficiency and reduce wasted radiated heat energy. The 3060 utilizes 120 output devices to generate power output of 900 watts-per-channel into any load. It is capable of massive current swings, enabling the amplifier to drive any loudspeaker to realistic performance levels.

Units will only be shipped operating at 240V AC mains feed (no 100V or 120V units will be produced) in order to guarantee full-rated power output. A complete array of protection and status monitoring circuits are continuously active. All metalwork is cut on Boulder’s own CNC machining centers and features the distinctly modern, angled appearance unique to all 3000 Series products. A black granite and stainless steel platform is cut and polished to match the angled surfaces of the amplifier and is shipped with each 3060. The manufacturer’s suggested retail price for the 3060 is $115,000 US.

The 3060 is the second release in the 3000 Series and showcases Boulder’s latest thinking in amplification technology. The 3060 also expands the 3000 Series product line and marks a substantial improvement in performance over Boulder’s own 2000 Series, moving the game on from what has long been considered the benchmark in high-performance audio amplification. This sets the stage for numerous future developments in other series  of Boulder products.  For more info, please visit www.boulderamp.com