Extraordinary Music and Art Experience at the Paul Morin Gallery in Alton, Ontario 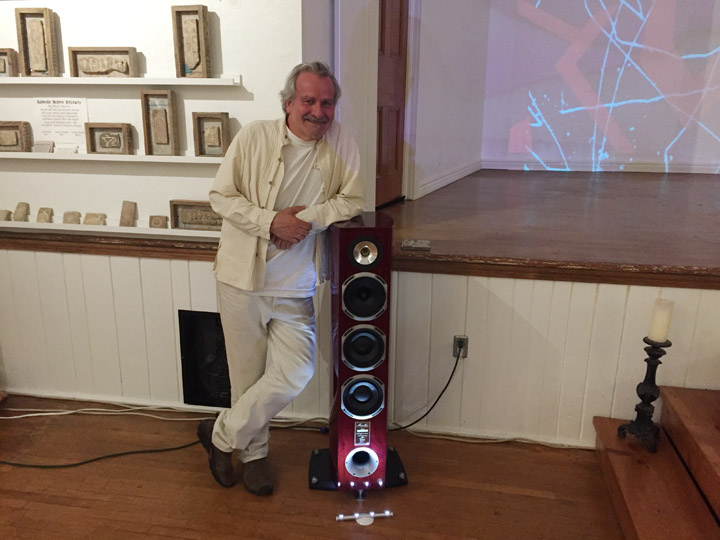 As a music and art enthusiast, I experienced something truly remarkable last night.  An event at the Paul Morin Gallery in Alton, Ontario led me through a musical journey spanning cultures from around the world accompanied by a dazzling, most unusual display of art. In the 14 years of publishing this magazine and writing about audio, I have never been so enlightened by sounds and sights – seriously!

The event was a collaboration between a trio of companies: the Paul Morin Gallery, Motet Distribution (Canadian distributor of high-end audio products) and Being There Audio (a high-end audio retailer in Orangeville, ON).

The Paul Morin Gallery is housed inside a historic church in Alton, Ontario, and provided an outstanding environment for the event, both visually and acoustically.  At the heart of the experience was a high-end audio system and an art video installation called “77 Million Paintings” by British musician Brian Eno.  The audio system consisted of Triangle Magellan Cello loudspeakers, a Finale niagara integrated amp and a laptop feeding the music.  The art installation was projected on to the back wall of a raised stage and – uniquely – stretched to the ceiling and the side walls. 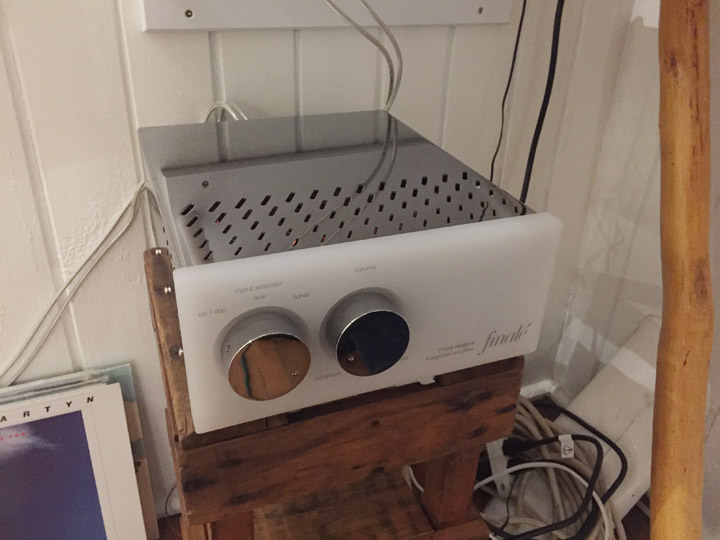 The Finale niagara integrated amp packs a “mighty” 10 watts per channel.  It turned out to be a perfect pairing with the Triangle Magellan Cello speakers.

The presentation was conducted by Paul Morin, owner of the gallery, artist, musician and writer – yes, he is a man of many talents.  Paul’s travels have taken him many times around the globe, in exploration of culture, music and art.  During this time he also acquired numerous exotic instruments that he plays for pleasure and employs in his recordings.  Just as importantly, Paul is an amazing storyteller that appeared to be delighted to share his stories with the audience.

The lights were dimmed and the presentation began… 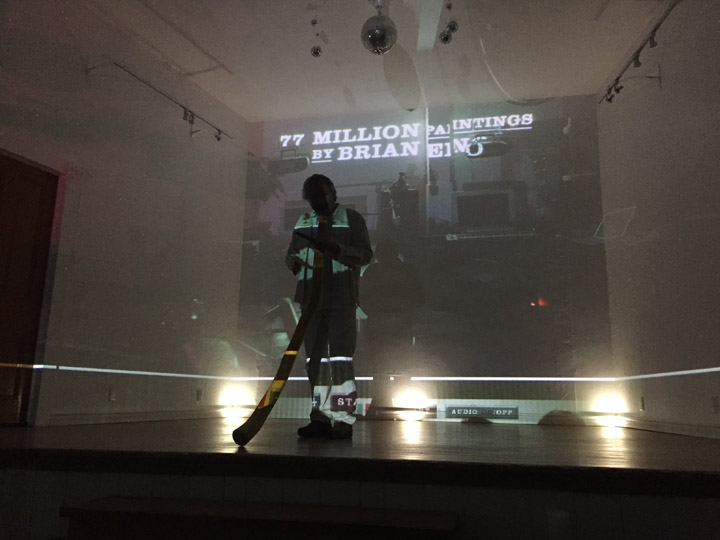 Paul played a curated selection of music tracks for the audience and provided a brief introduction about the artist and the instruments used, before each track.  He also pointed out various passages in the music to pay attention to.  The music literally spanned the world – from Australia to Africa, Japan, India and the US – his presentation exposed the audience to the types of music that many probably have never heard.  Paul also introduced us to a variety of exotic ethnic instruments, some with origins dating back hundreds of years.  At the beginning of the presentation he even played a few notes on an Australian Didgeridoo instrument, so that we could hear what the real instrument sounds like, before playing a recording for us that features the Didgeridoo.

Acoustically, this church / art gallery environment sounded incredible.  The Triangle Magellan Cello loudspeakers, together with the 10 watt per channel Finale amp, filled the space effortlessly with an energetic, highly detailed sound.  Every recording played with a remarkable presence.  Artist voices sounded palpable, at times giving the impression of the musicians being in the same space as us.  Instruments demonstrated outstanding texture detail and timber.  The high frequencies offered a deep insight into various percussion, wind and string instruments.  The Magellan Cello speakers were capable of filling the large space with a rich bass that reached astounding depths, yet they managed to maintain perfect control of individual bass notes and subtle variations.  Equally as impressive was the three dimensionality of the sound produced by this system.  The sonic landscape was enormous, stretching far to the sides and behind the speakers. 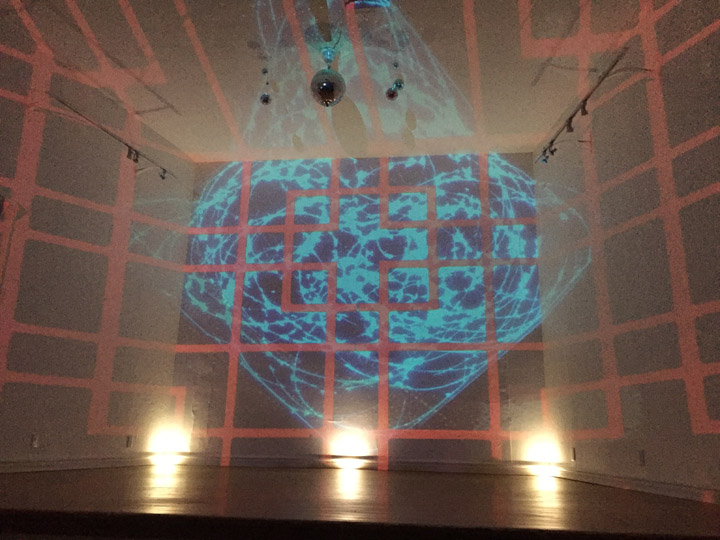 One of the “paintings” from the 77 Million Paintings projection.  Notice how the image was projected on to the back wall and stretched to the ceiling and the side walls!

The visual presentation of the “77 Million Paintings” added a whole other element to music enjoyment, allowing the audience to get lost visually within the sonic and artistic landscapes.  With the images cleverly displayed on multiple walls and the ceiling, the presentation offered a fantastic three dimensional perspective.  What an amazing complement this was to the music!

I have had a great appreciation and respect for music and art from a very young age.  The presentation of this evening introduced me to an entirely different means of enjoying music – by merging it with art.

My only worry is that listening to music, without the visuals and Paul’s commentary, may never be the same.  This is one event I won’t forget anytime soon 🙂

To learn more about the Paul Morin Gallery and upcoming events, check out www.paulmorinstudios.com

To learn more about Triangle loudspeakers, check out www.motetdistribution.com

To learn more about Being There Audio, check out www.beingthereaudio.com 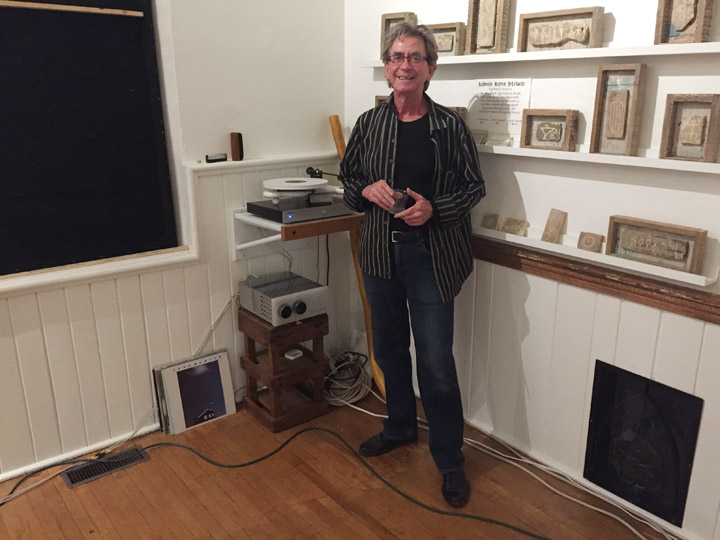