Editor’s note: Welcome to Part 6 of our Montreal Audio Fest show coverage. If you’ve missed the previous parts of this article, you can read them here: Part 1, Part 2, Part 3, Part 4 and Part 5.

Within the room of a local dealer, Son or Filtronique, I was smitten by the sight of a full Luxman system, driving a pair of Wilson Audio Sasha DAW loudspeakers (U.S. $37,900). 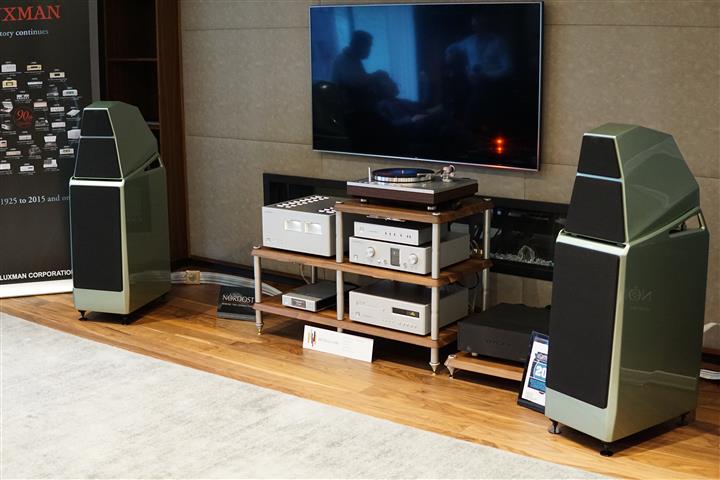 Personally, despite not having sea foam green at the top of my colour choice list; the system was truly an eye-catcher, much due to the retro-styled masculine lines of Luxman components. I was fortunate to run into a familiar face, Jeff Sigmund, President of Luxman America, who kindly walked me through their featured system.
Starting from the top down there was a Luxman PD-171A turntable, which includes a universal adjustable tone arm (U.S. $6,995). The table’s clean-lined brushed aluminum plinth top and wooden base beautifully fuse vintage with contemporary styles. 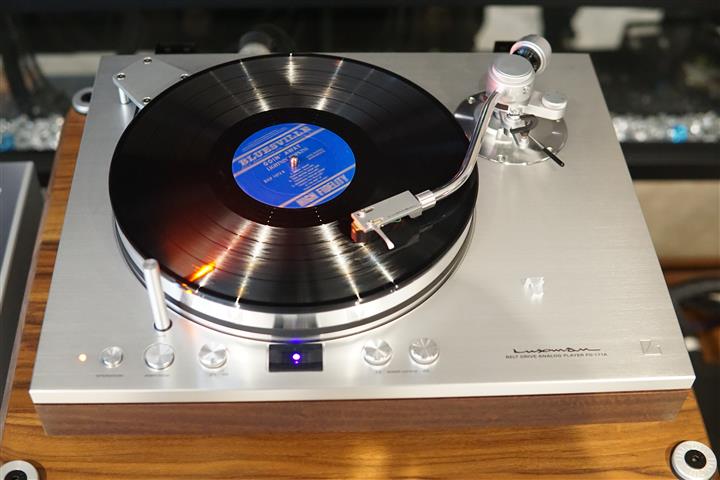 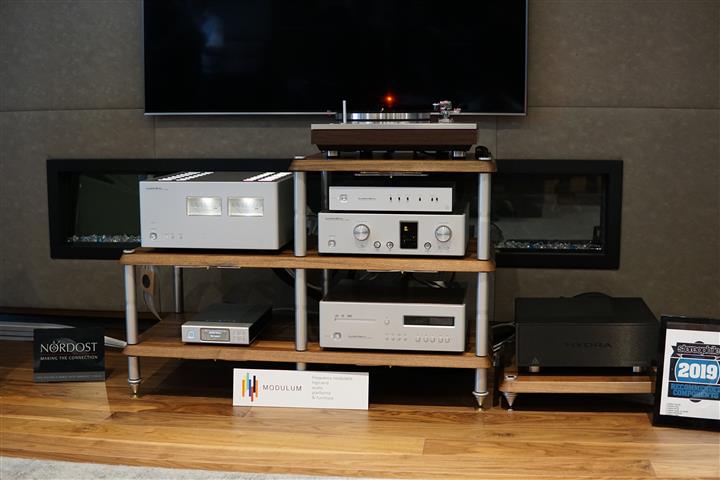 Listening to vinyl played on this system was calming, natural and oh, so sweet. The sound left me wanting for a scotch and more time to relax and imbibe but alas, this was not my last stop.

Nordost
Nordost was busy at the show providing visitors with not only a look but a real taste of what their products can provide when introduced in a system. 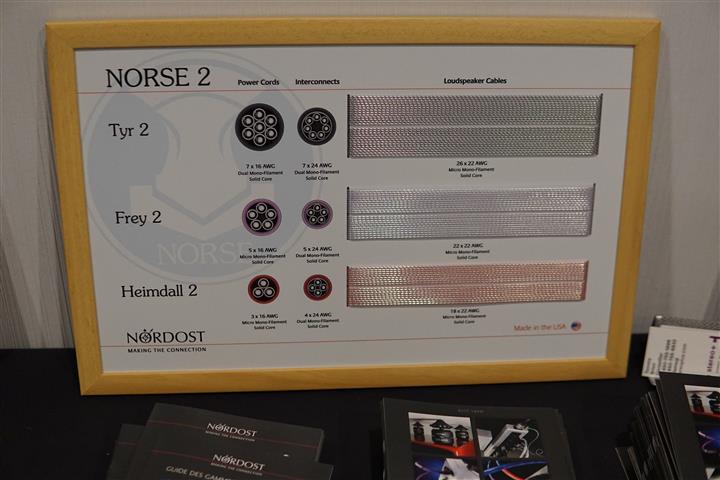 Bruno De Lormier, was conducting closed door demonstrations of Nordost products using an A/B/A comparison method. This allowed those attending to verify with their own ears the degree and quality of change achieved by introducing a Nordost product into the reference system. 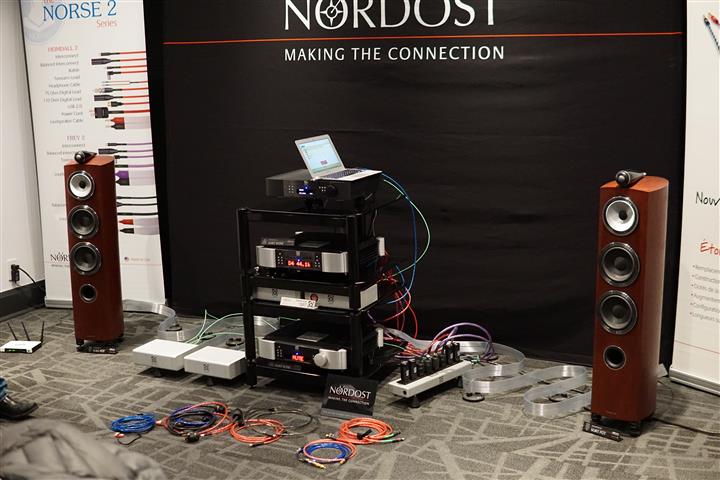 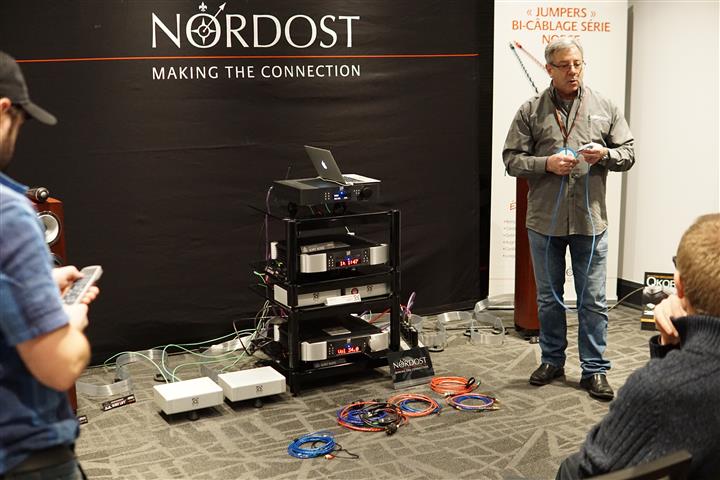 I sat through a demo in which Bruno demonstrated upgrading Nordost cables, and the positive sonic effects gained were very clear to my ears. But it wasn’t just me; it was clear from the reaction and the comments of most of the visitors in the room, as well. If you are skeptical, which you should be, don’t take my word for it, audition them yourself, as I’m sure you too will be impressed.

Tenor
From the hallway, I turned my head to see a glorious site, Tenor amplifiers. I was like a kid outside a candy store window, doing all I could to control myself from licking the glass… well, perhaps a slight exaggeration but I’m sure you get what I’m saying. 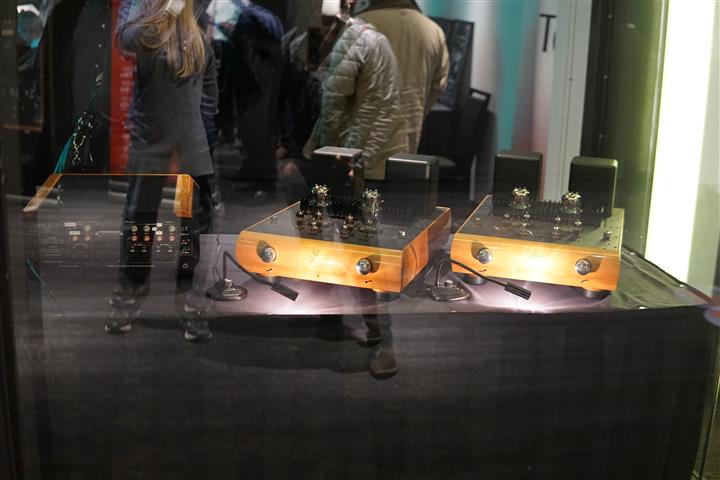 I entered the room with great expectations as this brand’s sheer luxury and performance have always impressed me. Near the entrance, I drooled over a couple of models on static display; first, the Tenor Phono 1 Phonostage (U.S. $61,500): 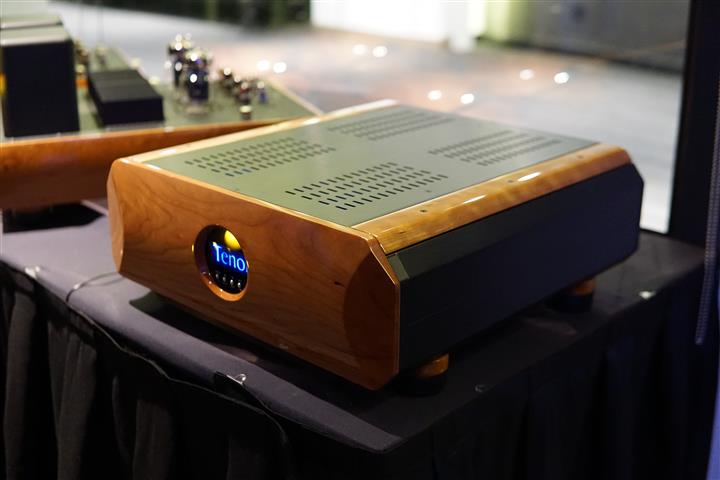 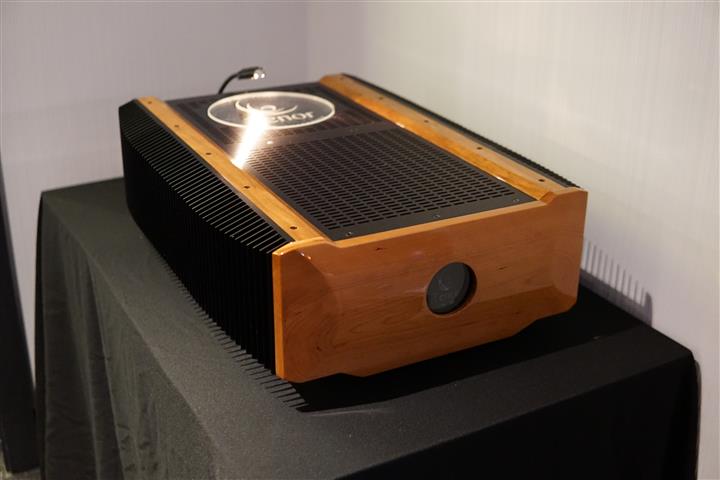 The main system was using an appropriate DCS digital source, while amplification included the Tenor Line 1/Power 1 preamplifier (U.S. $126,500) paired with the Tenor 350M mono-block amplifiers (U.S. $130,000). The speakers were unusually, the AK6 Klipschorn (U.S. $26,000/pair). I say unusually, given the price point; however, I’ve always found that Tenor will make the best of what’s connected to it, and that’s what it did. The Klipschorn was celebrating its 72 year anniversary, as well, and perhaps that’s why this speaker was chosen. 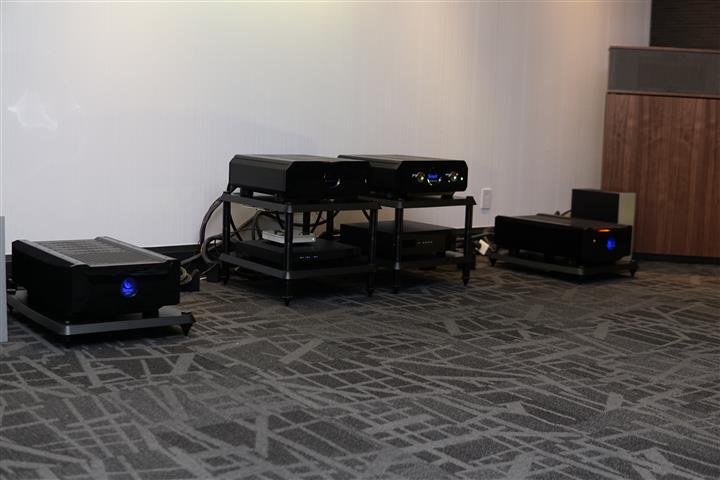 Listening to the track by Bonnie Raitte, “I Can’t Make You Love Me”, I melted in the liquid, lifelike and tonally rich sound. It was surprising to hear Tenor and Klipsch pair so well, there was no denying that. Though Tenor was not exhibiting any new products, they too are celebrating this year – it’s the company’s 20th anniversary; cause for celebration!

Gershmann / Krell / VPI
Featured in the Gershman / Krell / VPI room was a dynamic duo, so to speak, of systems. The smaller of the two was fronted by Gerhman Grand Avantgarde speakers (C$13,000/pr). 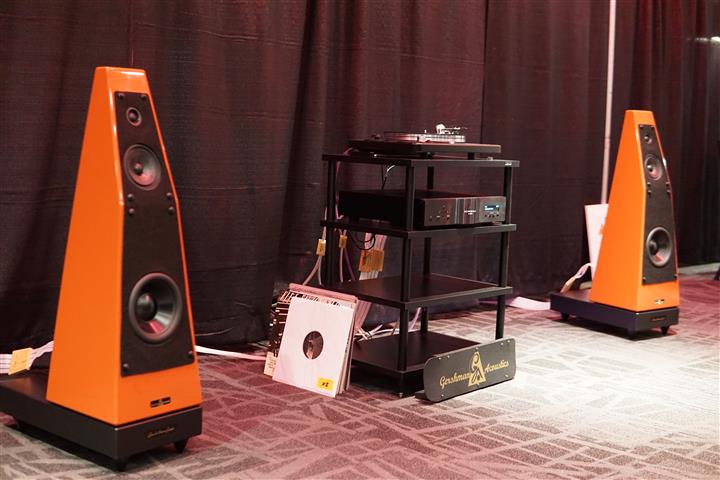 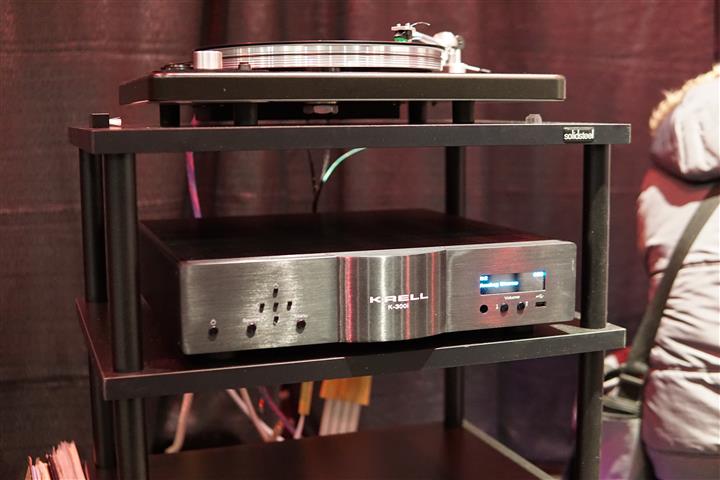 The sound I heard from this system was tremendously musical and above what I’d expect given the very reasonable price of the total system.
Moving my attention to the other side of the room there was a much grander system, in size as well as price. There, standing and speaking to a show visitor, was the founder of VPI, the man himself, Harry Weisfeld. 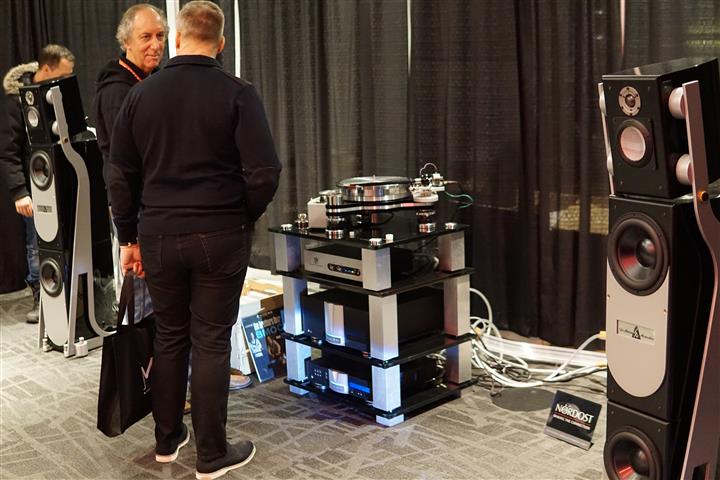 The system source was a VPI Avenger turntable (U.S. $20,000), connected to VPI’s own Voyager Phono Stage (U.S. $5,000) and driven by the Krell Illustion II preamp and Duo 175XD power amps (approx. U.S. $16,000). All the gear was wired up with Nordost Odin cabling. The speakers were German Acoustics flagship Posh (U.S. $129,000), which use a Morel tweeter, an Accuton ceramic midrange and German’s own in-house developed 8” woofers. The cabinet is 1” HDF with stainless steel baffle plates, within an adjustable focus structure. The system was very exacting in its delivery but unfortunately I was not able to get good listen, next time. 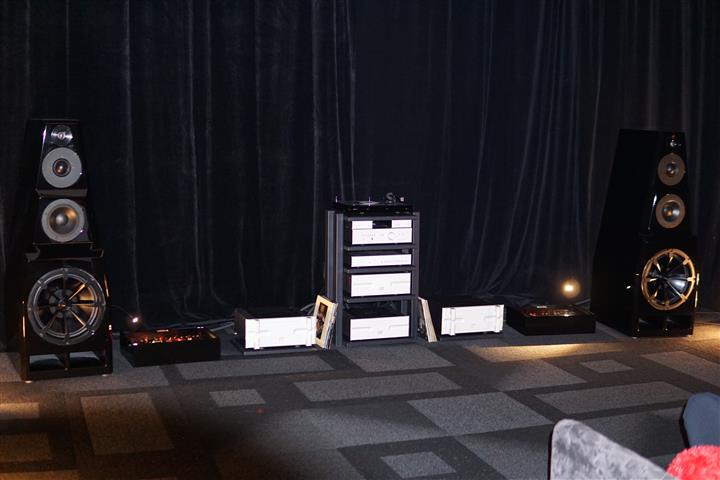 Referred to as the Ultimate Experience IV, this 4-way, 97 dB sensitivity, custom designed passive speaker (C$60,000 development cost) was playing Peter Gabriel, loud and in-charge. I was amazed with the dispersion of sound, which seemed to stay consistent wherever I walked in the room, even right up to the plane of the baffles. The speakers, I was told, play flat down to 23 Hz, using an 18” custom woofer, a Scanspeak tweeter and a very impressive custom crossover housed in separate enclosures with a window for visual impact. The dynamics and vivacity of the sound was very engaging and reminiscent of a live music event. 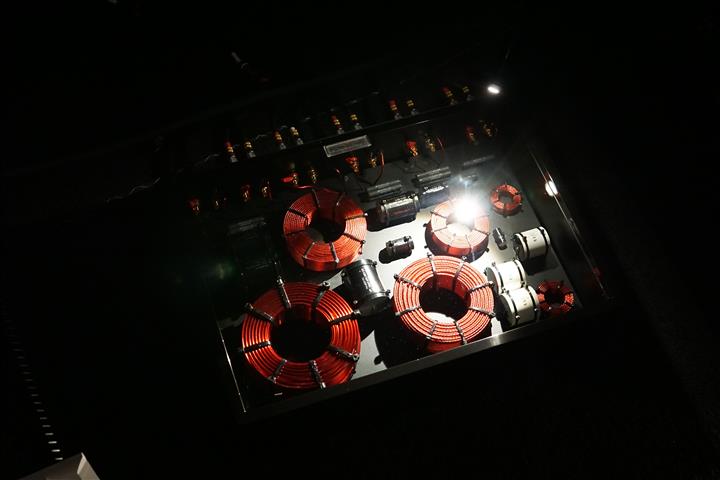 The speakers were driven by a full Bryston stack with two 28B Cubed amps, powering the woofers and a pair of 7B Cubed amps, driving the mids and tweeters, combined with a BDA-3 DAC and a BP17 Cubed preamp.

MOON by Simaudio
This room was featuring MOON by Simaudio electronics, including the company’s relatively new 390 all-in-one preamp/DAC/streamer (C$6,900) paired to a couple of 400M monoblock amplifiers (C$4,500/each). 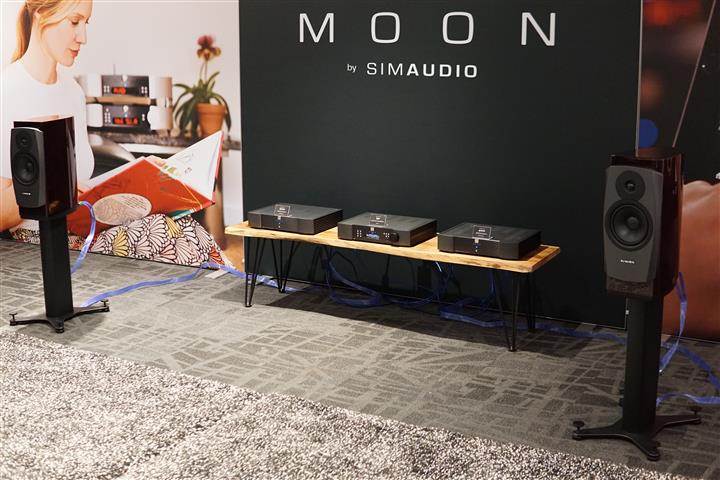 As much as I do enjoy MOON gear, it was the all-new Dynaudio Confidence 20 bookshelf speakers that had all my attention. I had not yet heard these speakers, and since my own reference speakers are Dynaudio Confidence Signature C2’s, I was so eager to hear this new Confidence that was premiered at the Munich High End Show last year. The sound was rich, incredibly relaxed and natural, effortless, in fact, as well as silky smooth. These rather modestly sized speakers were easily filling the room with glorious sound. I would have loved to spend more time delving into a playlist but that will need to wait for another time.

In Conclusion
Montreal is always a fun time and for me the Montreal Audio Fest is a big part of that. Yet, it is the entire package, the show, the music, friends, food and drink that have me coming back year-after-year. I hope you were able to attend the show, if not, there is always next year. I’ll leave you now with just a couple parting shots that I thought you might enjoy… 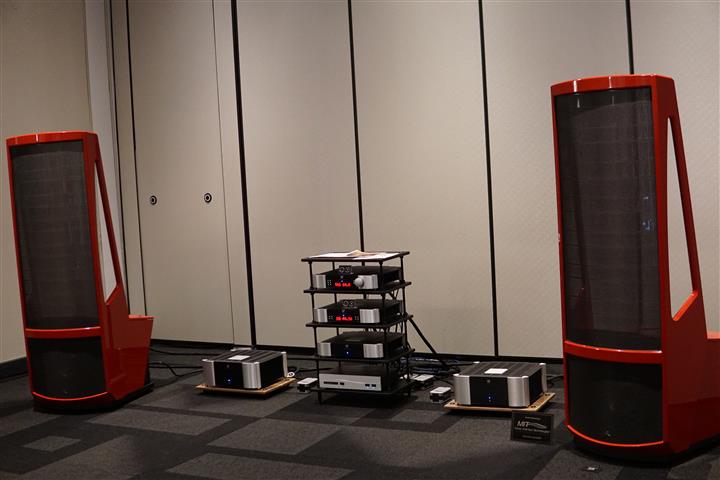 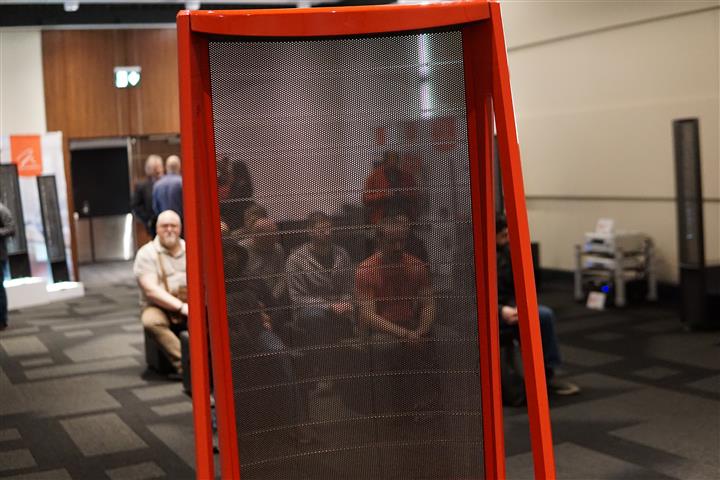 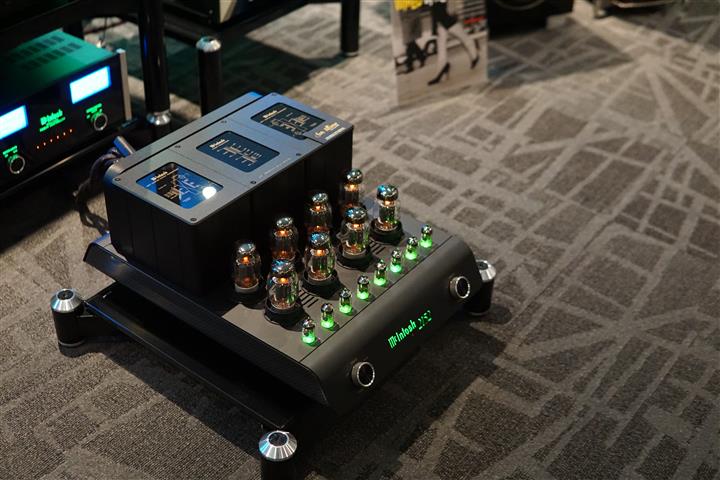 Last but not list, my cousin Danny, for whom this was his virgin experience of an audio show. And smitten he was by this opulent and beautiful sounding system put on by Audio by Mark Jones, including electronics from Magico, CH Precision and Vertere: 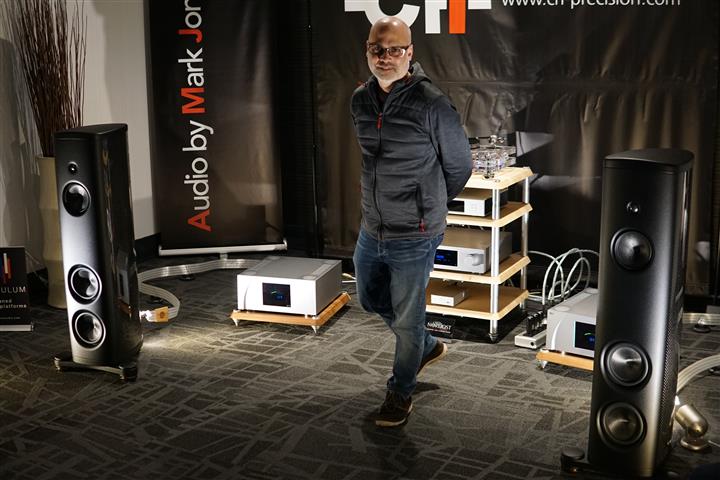