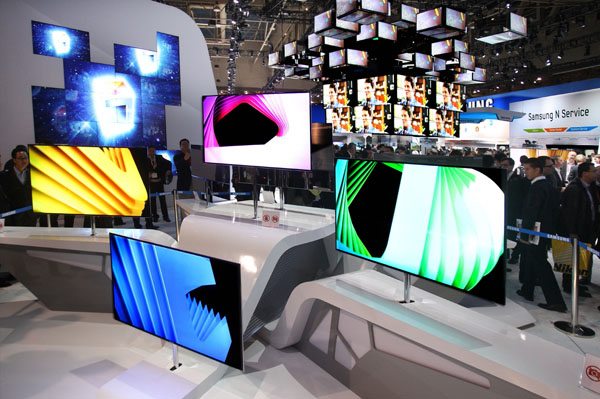 Samsung’s 55-inch Super OLED TV is a masterpiece that was admired by home entertainment and design enthusiasts alike at this year’s CES, collecting numerous awards from media outlets including Popular Science, Stuff Magazine and G4 TV, as well as a Best of CES Innovations Award from CEA, the producer of the International CES

Super OLED technology delivers the ultimate in picture quality and thinness, since there is no need for a color filter as the OLED pixel unit comprises self-emitting RGB sub-pixels laid directly on the display panel, each emitting its own light. The technology is also able to differentiate varying degrees of blacks and shadows, so that users can enjoy unparalleled detail even in the darkest of scenes for the ultimate TV experience.

The Samsung KN55ES9000 OLED TV will be available commercially worldwide this year and is expected to cost somewhere in the region of $8,000 US.

These are some of the awards that the TV picked up at CES:

• Popular Science – Best of CES 2012: Products of the Future. “After you’ve stood in front of this OLED beauty, it’s hard to look at normal TVs the same way again.”

• Stuff Magazine – CES Hot Stuff Award. “Ludicrously slim, amazingly bright and devilishly clever… it also has facial recognition and is one of the first TVs with upgradeable innards”

• “Best of CES Innovations 2012” in the Video Displays category —International CES. “Samsung’s KN55ES9000 is a beautiful masterpiece of accurate color reproduction and maximized performance. It provides a suite of advanced Smart TV features with a high performance dual core chipset.”

In addition, Samsung’s Smart Evolution, a feature of the Super OLED TV, was recognized with a CES Editor’s Choice Award from Popular Mechanics.