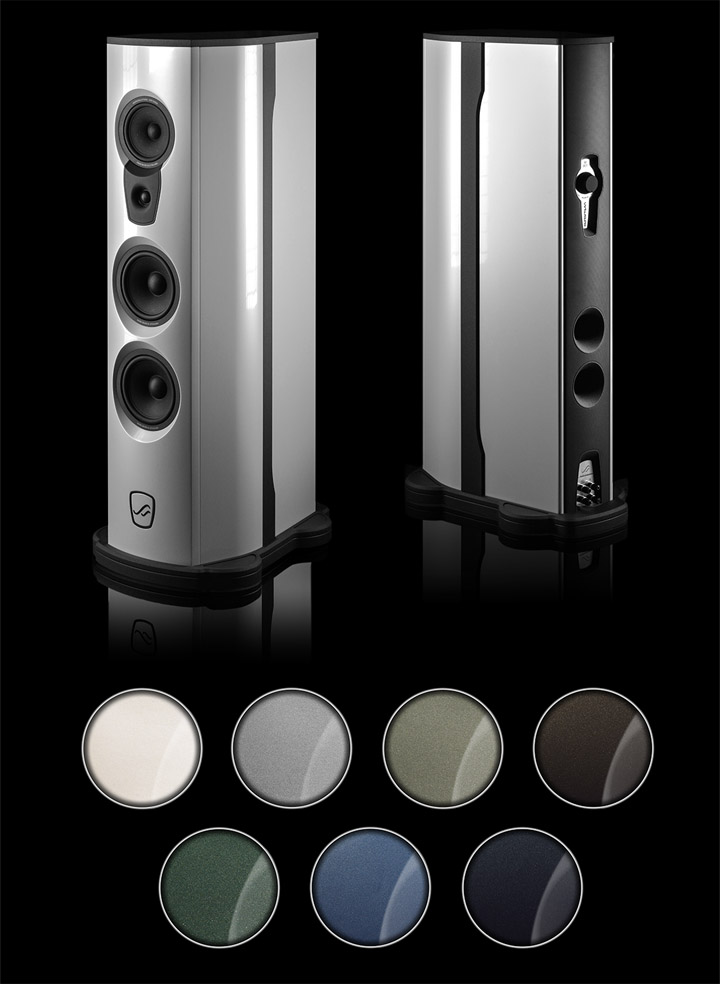 AudioSolutions, the leading European loudspeaker manufacturer, is thrilled to host the world premiere of the Virtuoso loudspeaker series at the Munich High End show in Germany, which runs from May 9-12. The Virtuoso series employs much of the advanced technology originally developed for the company’s flagship Vantage 5th anniversary series, combined with a sophisticated visual design. Notable highlights of the new series include a mini-horn loaded tweeter, an extended frequency mid range driver, a user-adjustable crossover with three profiles, as well as innovative self-locking, double-box cabinets. The new series sits comfortably between AudioSolutions’ Figaro and Vantage 5th anniversary series. At launch, the series will offer a single 3-way, floorstanding model called the Virtuoso M, and new models will be added in the near future.

The Virtuoso series is offered in seven standard finishes: Pearl White, Silver Grey, Zinc Grey, Charcoal Grey, Pine Green, Ice Blue and Glacier Blue. Five vibrant metallic colors are also available, which include Lemon, Deep Orange, Saturated Green, Teal and Saturated Blue. There is one additional finish, called Flame Chameleon, for those who desire a unique, custom look. This standout finish changes color from a cold grey to a warm red, depending on how light hits its surface.

Featuring a 3-way design, the Virtuoso M model is outfitted with two 7.5-inch bass drivers, a 6.5-inch mid driver and a 1.2-inch silk dome mini-horn loaded tweeter. Thanks to a host of advanced design techniques and unique features, the Virtuoso M aims to please the ears of the most discerning audiophile listeners around the world. 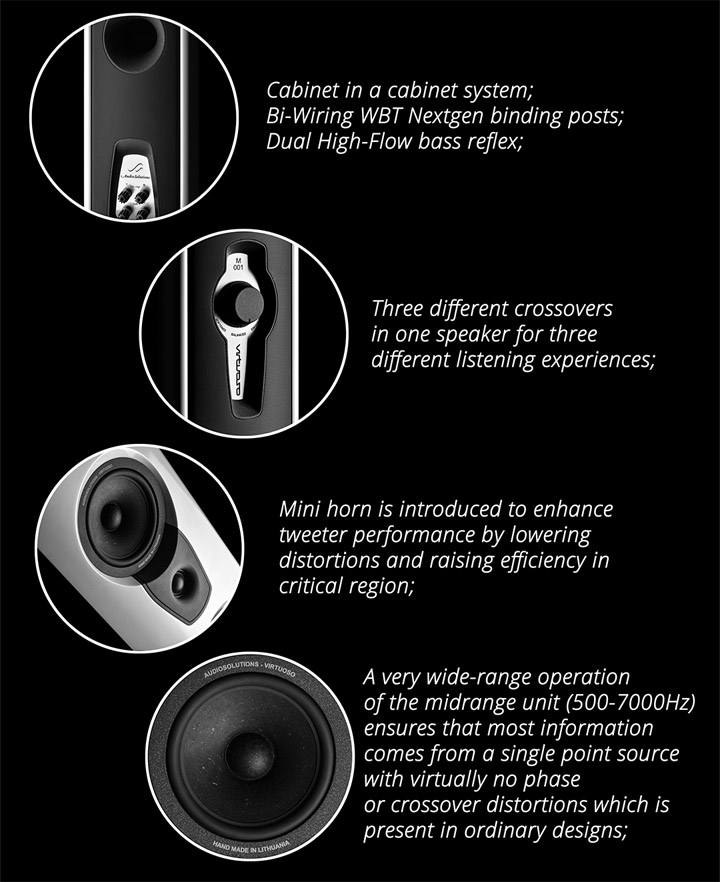 The mini-horn loaded tweeter, initially developed for AudioSolutions’ Overture loudspeaker series, helps to overcome unwanted soft dome resonance issues, which result in distortions and harsh sound, especially when driven heavily. The mini-horn is designed to raise tweeter sensitivity, thereby lowering THD after normalization, at the frequence range that is most sensitive to distortions. This mini-horn loaded tweeter has a proven success and is now used in all new AudioSolutions loudspeaker designs.

It is a well known fact that even the best crossover designs deteriorate the quality of sound, introducing phase distortion and increasing THD. That’s why AudioSolutions uses mid range drivers that cover a wide frequency spectrum, ranging from 500 to 7000 Hz, in all of its speakers, including the new Virtuoso series. This allows for the crossover to be placed outside the 800 to 2000 Hz frequency range, where human hearing is most sensitive. Sonically, this allows AudioSolutions to achieve a much cleaner, more neutral mid range response.

AudioSolutions first introduced an adjustable crossover in the Vantage Classic loudspeaker series. This allowed the user to fine tune the speakers to their room and associated audio components. Now with the Virtuoso series, the concept is raised to another level, allowing the listener to choose one of three different crossover profiles:

1. Balanced – this mode offers a very sweet mid range response, great musical clarity and an immersive soundstage.
2. Soft – this mode is ideal for prolonged listening sessions and times when the speakers are driven near their limits, especially when listening to rock or metal. The continued evolution of high-end audio components and loudspeakers means that today’s gear reveals many imperfections in the recordings, which can make them sound distorted, noisy and tiring to your ears. This is particularly true with classic rock albums. The Soft mode applies a technique similar to recording studios, manipulating distortions and very sharp nulls in the frequency range.
3. Enhanced – engaging this mode will allow the listener to experience the finest level of musical details from their recordings. This mode is especially well suited for quiet evening listening sessions, when ambient urban noise is reduced, and micro details in the music come alive. This mode can mean the difference between simply listening to music and establishing an emotional connection with your music, prompting you to get up and dance or shed a tear, when listening to your favorite tunes.

Another significant highlight of the Virtuoso loudspeaker series is its advanced “box in a box” cabinet design, which consists of two layers glued together. Originally developed for the Figaro series, the structure of this cabinet has been further improved to enhance the sonic performance of the Virtuoso series. The weakest points of a traditional speaker cabinet are the corner joints since they behave almost like hinges, rather than tight joints. The “box in a box” approach resolves this issue by combining two cabinets, arranged in an offset pattern. The internal cabinet is fully sealed and outfitted with heavy internal bracing and dampening. It is then covered with an outer box, which is glued tightly to the internal cabinet. This technique allows the cabinet to achieve 10 times the stiffness of a single layer enclosure. The sonic gains from the stiffer cabinet are enormous – the sound is neutral and more authentic.

Last but not least, the Virtuoso series is equipped with the WBT Nextgen bi-wire speaker cable posts for a lossless signal transmission.

The AudioSolutions Virtuoso M loudspeaker will see its world debut at the High End 2019 show in Munich, Germany from May 9-12. Additional models will be added to the new Virtuoso range later this year.

Pricing and Availability
The AudioSolutions Virtuoso M loudspeaker is available now at a suggested retail price of $32,000 USD / pair. 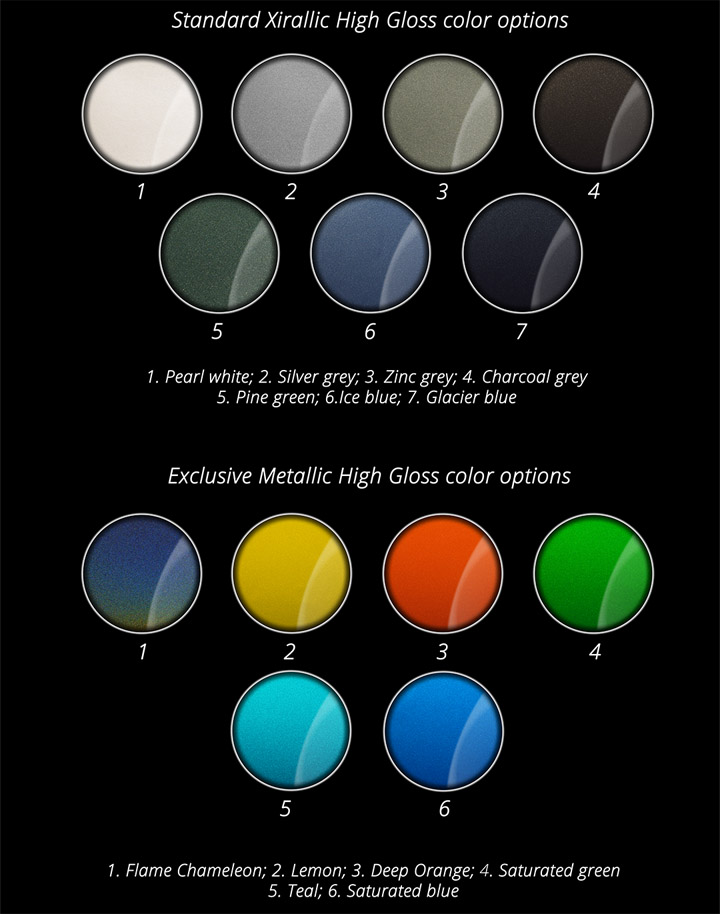