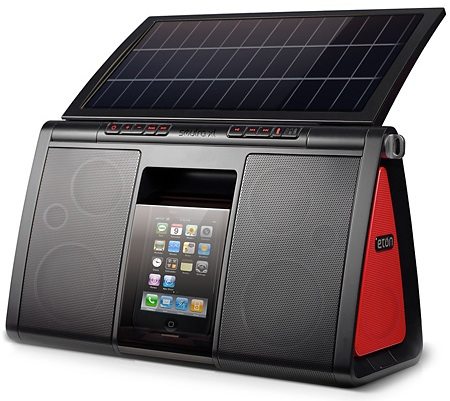 Just in time for the summer, Eton has began shipping its new Soulra XL portable speaker dock, a successor to the company’s Soulra model introduced last year.  The Soulra XL retails for $300, which is about $100 more than last year’s model, but comes with a number of new features and improved styling.

The Soulra XL is a solar-powered sound system for the iPhone/iPod which features an enhanced solar panel and eight speaker drivers, providing the ultimate hybrid of portability and exceptional sound to charge and play the popular Apple devices.  The Soulra XL is larger than the older Soulra, and the new Soulra XL is equipped with a 72 square-inch enhanced monocrystal solar panel that can be used to juice up its internal 2,000mAh rechargeable lithium ion battery.

The boombox is fitted with eight speaker drivers that create 22W of output, and on a full charge the Soulra XL will allow you to party for around 5 hours continuously, with the help of its solar panel.  Designed for charge-and-go use, the internal, rechargeable lithium ion battery can be charged via the foldout solar panel or the included AC adapter. Soulra XL requires about five hours in direct sunlight to fully charge and can provide playback for more than eight hours, depending on conditions. With the unique ability to also charge the iPhone or iPod while playing, Soulra XL can keep you powered all day.
The iPhone or iPod is housed inside an anti-glare tinted chamber, allowing the user to see the iPhone or iPod screen content while still providing added protection. The user can easily dock the iPhone or iPod — even with most cases still on the device — as the dock connector is raised and mounted on a swivel hinge.

With eight speaker drivers – two tweeters, two woofers and four passive radiators – the Soulra XL provides solid sound, and the system’s 22W output with bass boost is enough to fill any indoor or outdoor space. Other features include an integrated remote control storage compartment, a line input for other music devices, battery charge and solar charge indicators and a power-saving mode.