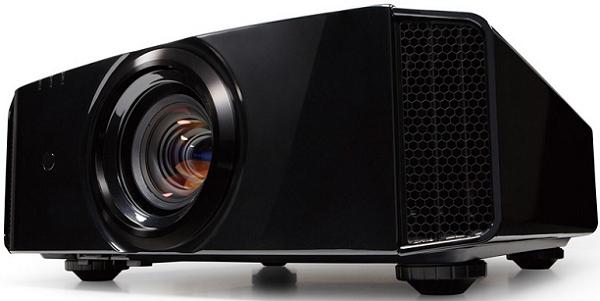 JVC has just announced a new and expanded line of home theater projectors, which incorporate significant improvements in picture performance and upgraded 2D to 4K upscaling technology, now called e-shift2.  In addition, a new illumination system and polarizing wire grid have also been introduced into this new lineup, for improved native contrast.

JVC’s 2013 projectors are the Procision Series DLA-X95R, DLA-X75R, DLA-X55R and DLA-X35, marketed by JVC’s Consumer AV Group, and the Reference Series DLA-RS66, DLA-RS56, DLA-RS4810, DLA-RS48 and DLA-RS46, available through JVC Professional Products Company. All are 3D-enabled and all except for the base models in each series offer e-shift2.

In other enhancements, new 2K to 4K scaling technology using proprietary JVC algorithms replaces a two-band filter with an eight-band filter to apply more correction to more areas of the image. This delivers a noticeable improvement with any compatible 2D signal. To optimize performance for different content, this Multiple Pixel Control offers five preset modes plus Off.

3D performance has been improved, with new circuitry and a new optical engine responsible for reduced cross talk. The result is more natural, clear and brighter images.

Another key enhancement is a new illumination system, including a new lamp and power supply, which delivers a significant improvement in brightness over the life of the lamp. In addition, the lamp warranty has been extended to one year/1,000 hours.

Other enhancements new for 2013 are:
• New active shutter glasses for 3D viewing use RF rather than IR technology to offer more stable synchronization and extended range while avoiding possible interference with IR-controlled devices;
• Smartphone application that allows remote control of the projectors from a smartphone or tablet ;
• Additional lens memory settings – Ten for the DLA-X75R, DLA-X95R, DLA-RS56 and DLA-RS66 and five for the DLA-X35, DLA-X55R, DLA-RS46, DLA-RS48 and RS4810. These store custom focus, zoom and horizontal/vertical lens shift position. This allows a constant height display of 4:3, 16:9 , 2.35:1 or any other scope content without an additional anamorphic lens.

The flagship DLA-X95R and DLA-RS66 are built using hand-selected, hand-tested components and have a 130,000:1 native contrast ratio. For 3D viewing, both models come with two pairs of PK-AG3 RF 3D glasses and a PK-EM2 3D Signal Emitter. Both projectors also have a three-year warranty.

The DLA-X95R, DLA-X75R, DLA-RS66 and DLA-RS56 feature e-shift2, upgraded light engine, full color management, ISF certification and advanced calibration functionality. In addition, they are designed to pass the 400-plus tests necessary to achieve THX 3D Certification (pending) – a promise to consumers of the highest level of quality and performance. All JVC THX Certified Projectors include THX 2D and 3D Cinema viewing modes to provide the most accurate color reproduction available in a pre-calibrated setting, ensuring content is rendered back just as its creator intended.

The new JVC D-ILA home theater projectors will be available in November 2012 at the following prices – expressed in U.S. dollars:

Look for more information on these products at: www.jvc.ca.