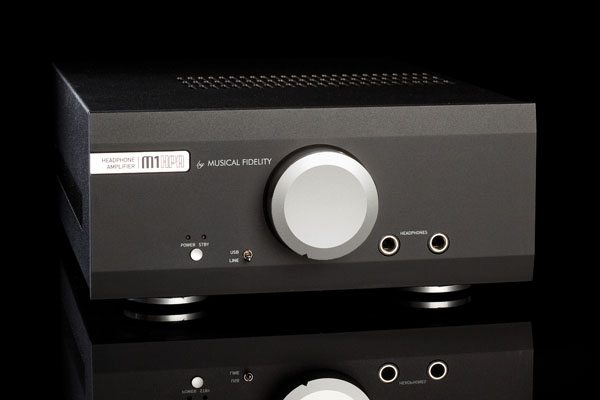 First meet Antony Michaelson, head honcho at UK audio manufacturer Musical Fidelity. A classical music fanatic, a man who describes anyone listening to compressed music on their iPod as brain dead, but also an accomplished clarinetist appearing as the soloist on several CDs in my collection. He’s one of the outsize personalities in this industry, and a man who marches to the beat of his own drummer. Antony loves Class A amplification and claims to have produced more Class A amps over the last 30 years than any other manufacturer, or perhaps all other manufacturers put together. So what is Class A? Without going into technicalities, Class A amplification is an amplification mode where the circuit’s amplification devices are switched on at all times. It is inefficient compared to the more common Class AB or the hyper-efficient Class D (switching amp), and as a result it generates a great deal of heat and requires powerful power supplies and often massive heat sinks and cooling fins or even fans to dissipate the heat. It is more common to find Class A used in preamp sections where the limited power output required makes it easier to accommodate the power supply and cooling necessary for Class A. In return for inefficiency, Class A provides the purest amplification, the greatest linearity and requires the simplest circuitry that completely avoids the dreaded crossover distortion that affect Class B or Class AB amps. Even Class AB amps actually use Class A for the first watt or so of output, maybe even the first 10 watts for some high end amps, before switching over to operate in the more efficient but inferior Class B mode for peak output levels. Class A amps don’t just use a lot of power when working hard, they also use a lot of power even when idling.

Over the years an astonishing number of components have poured out from his company, from inexpensive and very compact to massive limited edition powerhouses. Today Musical Fidelity offer six distinct series, covering a wider range of budgets than perhaps any other audio manufacturer:

Both the V-Series and M1 Series offer dedicated headphone amps. Why would you want one?

You’ve invested in some pretty expensive headphones, and now you want to find out just how good they are. Most likely you won’t be able to do that by plugging them in to your iPod or even your integrated amp or CD Player, even if they do have the right outlets. Two reasons – quality and quantity. In the majority of cases the headphone output is driven by inexpensive components with a relatively unsophisticated power supply, or is a throttled down remnant of the speaker output, not an output designed from the bottom up to meet the special needs of wide range of headphone. There’s your quality bottleneck. The output level is OK for headphones of average or high sensitivity, but often woefully inadequate for the low sensitivity or difficult to drive impedance curve of many of the higher end headphones.

The solution lies in a dedicated headphone amplifier. The output stage will be optimized for headphones and it will be fed by a dedicated and optimized power supply. In the case of the Graham Slee Solo Ultralinear, reviewed here recently, that power supply is housed externally to keep the high voltage and the associated electromagnetic fields well away from the delicate amplification stage.
Musical Fidelity has chosen a different route, keeping the power supply in the same chassis as the amplification stage but using a large chassis and careful attention to the layout of the circuitry to minimize noise. The impressive looking chassis is a perfect match for other M1 series components, and will also match well with M3 and M6 series products. Very handsome to be sure, with a front plate dominated by an enormous and very smooth volume control. A small on/off button and a toggle switch between RCA analog and USB digital input are placed to the left of the volume control, and two ¼” jacks sit to the right.

If you open the box, there’s a large circuit board on the floor but relatively few components. The output stage operates in pure Class A and is said to use the same topology as Musical Fidelity’s more expensive components. The chief claim is an astonishingly low output impedance of less than 1 ohm, which means the M1HPA will happily drive pretty much any dynamic headphone, including the notoriously finicky AKG K1000. Along with many other Musical Fidelity components, this one boasts choke regulation on its power supply, an expensive but very effective way to improve the performance of everything upstream.

I mentioned a USB input didn’t I? Does this put the M1HPA into direct competition with the Grace M903 or the Benchmark DAC1Pre? Not really. These are altogether richer fare on the digital side, with multiple inputs and the ability to input high res audio signals and they are also around twice the price. The USB input in the M1HPA is really bare bones, limited to 44.1kHz or 48kHz and 16 bits. It is included here simply as a convenience option, oversampling the input 8 times before conversion. Musical Fidelity will be happy to sell you other components for the conversion of high res digital signals. But the M1HPA does have a trick up its sleeve. It can double as a high quality preamp, provided you have just the one analog input.

Does it look as sound as good as it looks?

First up, I can confirm all Musical Fidelity’s claims of being able to drive difficult loads with ease. I may have had to turn the volume control close to the maximum in some extreme cases, but in this class A design that is never a problem. There is no sense of strain at any volume level, and even at the maximum, the background is silent. The $799 M1HPA is a highly resolving and low distortion animal, making sense of highly complex orchestral works and rock bands alike. I am very impressed. Compared to the significantly more expensive Graham Slee Solo Ultralinear ($1199), the presentation is a touch on the cool side, somewhat less involving, with a soundstage a fraction smaller and tone color not quite the equal, but these are small differences indeed. The Solo Ultralinear cannot match the silent background of M1HPA with more sensitive headphones. A second Graham Slee model, the Solo SRGII ($999), is a very close sonic match indeed to the M1HPA, sharing the somewhat cooler presentation, and similarly silent between the notes, with a slight edge in the level of detail. Neither Solo model can match the fit and finish or the industrial design of the M1HPA.

Most impressive is the sense of ease and power across an enormous frequency range. This amp is absolutely bulletproof and never shows any sense of strain with any of the headphones in my rather wide ranging collection, an indication Musical Fidelity have provided a high quality power supply section.

What about its abilities as a preamp? It doesn’t offer remote control, balanced operation or a range of inputs, but there’s no skimping on quality here. I put it up against the Parasound Halo JC2, a highly acclaimed $5299 balanced preamp, reckoned to be quite a bargain by high end standards. You’d think the JC2 would wipe the floor with it. Well think again. Certainly the JC2 is the more accomplished performer, better able to place all the instruments in their own space and with a more true to life colour and ambiance, but the M1HPA was close on its heels in all departments, and spectacularly good for the price.

I’m delighted to be able to lavish praise on a component that won’t break the bank, that can handle the most difficult to drive phones with ease, and that as a bonus can double as a preamp of limited functionality but first class performance.

Sidebar: An Unusual Service from Musical Fidelity – From the website www.musicalfidelity.com

When we design our products, we use the best components possible at each price point, and wring the utmost performance from them. The results are the amazing value amplifiers on which we have built our reputation.
That’s not the end of the story, though. We can tune up individual amps for even higher performance by using much more expensive components, by hand selecting matched pairs of output transistors and by fine tuning of individual gain stage performance.
These procedures are not practical for general production, but are ideal for one-off tune ups of individual amplifiers or CD players.
We have found that our fine tuning techniques, even though they are not cheap, offer significant improvement of sonic performance.
If you want to get even more performance from your Musical Fidelity product, talk to us. We can tune up all the products we have made since 1985, with the exception of the SACD player. We know what can be done, and we know how to do it.
Note: This service is available only by contacting the manufacturer directly at +44 208 900 2866.